The Galaxy S22 flagship series won’t be unveiled exactly one year after the Galaxy S21 lineup’s debut. According to the latest, the upcoming Samsung flagship trio will be announced in February and released later the same month.

Nothing has been officially confirmed thus far, but rumors keep coming in, and although some were proven wrong, others will very likely be proven right in a few months from now. So, without further ado, below you will find everything that was rumored, and everything we know — or think we know — about the Galaxy S22 series. Keep in mind that the list is not final and will be updated as more details surface.

The Galaxy S22 display should measure 6.06-to-6.1 inches, while the Galaxy S22+ is said to have a panel that measures anywhere between 6.5 and 6.6 inches. Resolution and refresh rate details are unknown, but it’s almost a given that all three flagship models will boast 120Hz refresh rate capabilities.

All three models use Dynamic AMOLED 2X display technology and take advantage of a 120Hz refresh rate. The Galaxy S22’s panel tops 1,500 nits of brightness, but the Galaxy S22+ and S22 Ultra can achieve 1,750 nits.

The Galaxy S22 series might be Samsung’s first to adopt sensor-shift camera technology similar to the iPhone 12 Pro Max. This technology stabilizes the camera’s sensor instead of the lens, which leads to improved image quality and better stabilization.

In addition to this, the Galaxy S22 could be the company’s first flagship series to feature cameras that were developed with the help of Japanese optics manufacturer Olympus, though the exact purpose of this alleged collaboration — if it exists in the firs place — is unclear.

The base Galaxy S22 model and the Galaxy S22+ could feature a 10MP telephoto sensor with 3x optical zoom and a 50MP main camera. And although the camera setup probably won’t see massive upgrades in some areas, it could boast one major improvement through continuous zoom capabilities. There are speculations that the Galaxy S22 Ultra model will feature a 200MP camera — possibly the ISOCELL HP1 unveiled in September.

Update 1: The Galaxy S22 Ultra was later rumored to feature a 108MP camera similar to its predecessor.

Update 3: The Galaxy S22 and S22+ will have the same 10MP selfie camera as the previous models, while the Galaxy S22 Ultra will feature a 40MP selfie sensor.

We’re not sure where Samsung will push the design of its Galaxy S lineup next, and this is in large part because it’s too early to tell. Samsung doesn’t seem to have decided on all the design aspects of the Galaxy S22 series, but more details are bound to leak eventually. Fan renders exist, though they are based largely on speculation.

This is a developing story that will be updated with new bits of information, leaks, and rumors as they emerge, so make sure you bookmark it and check back regularly if you want to stay up to date with the Galaxy S22 series.

Update 2: Similar renders depicting the Galaxy S22 and Galaxy S22+ have emerged as well. According to these images, they use the camera housing design language as the Galaxy S21 series.

Update 3: Photos of third-party cases for the Galaxy S22 series emerged, confirming many design details that were seen in the aforementioned renders.

Update 4: The Galaxy S22 Ultra’s design was revealed in real hands-on photos. It has an S Pen slot and a much more refined camera housing design.

Update 5: The Galaxy S22 and S22+ got rendered in high-quality images based on leaked information from an ex-Samsung employee.

Update 7: The Galaxy S22 Ultra could come in a Rose Gold or Pink Gold version, as well. Leaked images show this particular color variant next to a white Galaxy S22/S22+, and we have to say it looks quite striking. 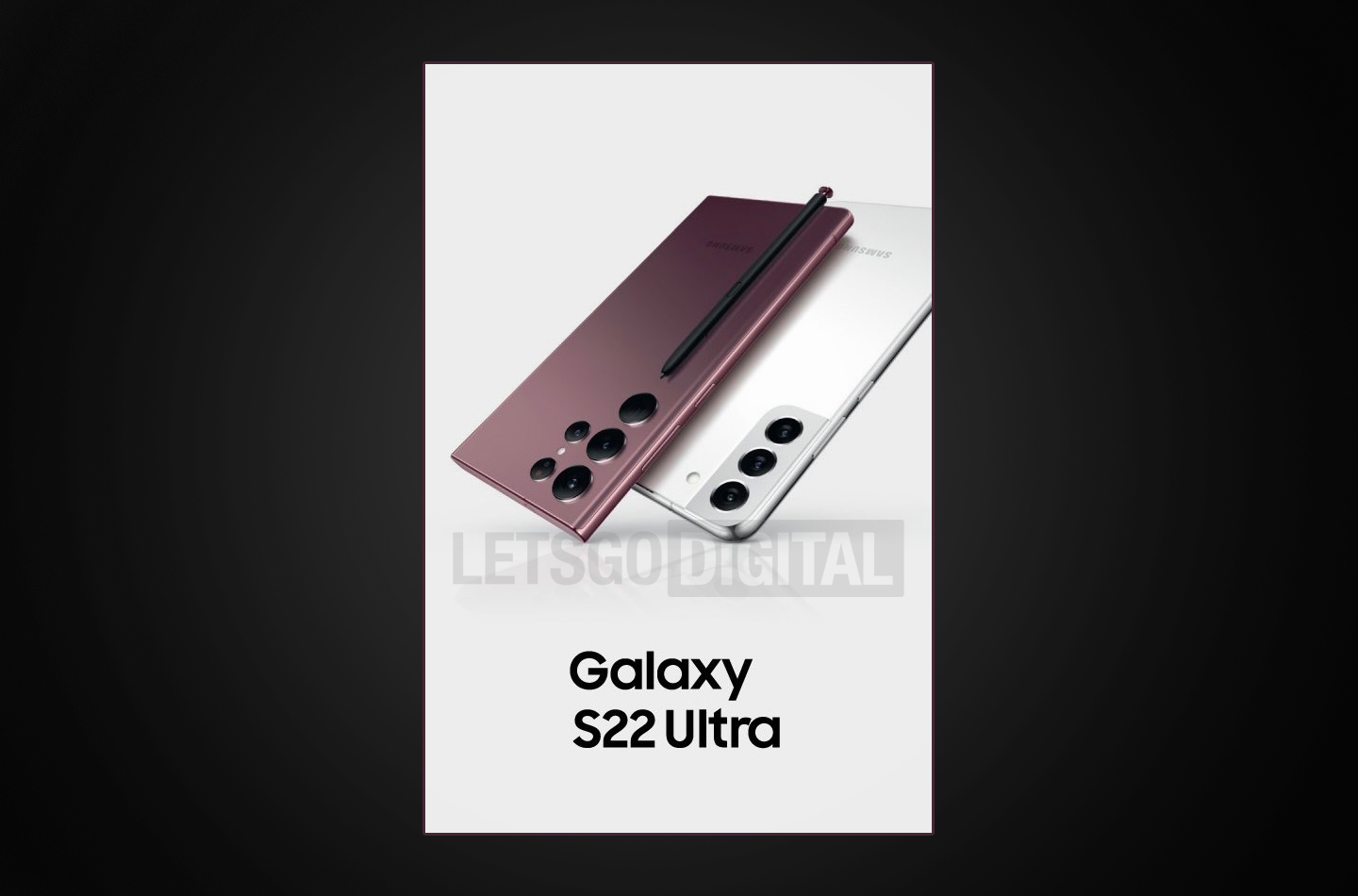 Update 8: The entire Galaxy S22 series has leaked in high-quality renders. Each device is showcased in four color options.

Samsung’s upcoming flagships should be released with an Exynos chipset in some markets and a solution provided by Qualcomm in others.

On one hand, there’s the unannounced Snapdragon 898 chipset, which is said to feature a Cortex X2 CPU core, three Cortex A710 cores, and three Cortex A510 cores.

On the Exynos side of things, the upcoming Exynos 2200 SoC could become the first chipset developed by Samsung to boast AMD graphics, the latter of which would greatly improve graphics performance.

This chipset is built by Samsung Foundry on a 5nm process and is said to be fit for both smartphones and laptops.

In terms of batteries, there are clues hinting at the Galaxy S22, Galaxy S22+, and Galaxy S22 Ultra having 3,800mAh, 4,500mAh, and 5,000mAh batteries, respectively. And of course, all three phones should support fast charging and wireless charging.

Update 1: The Snapdragon-powered Galaxy S22 was benchmarked online and it didn’t perform as well as the Exynos model in preliminary tests.

Update 2: Separate reports indicate that the Galaxy S22 series will employ smaller batteries than the ongoing flagship models. The Galaxy S22 and S22+ will reportedly have 3,700mAh and 4,500mAh batteries, respectively.

Update 3: The Galaxy S22 Ultra is likely powered by a 5,000mAh battery, this time with 45W fast-charging.

Snapdragon 898 and Exynos 2200 variants will be available in these markets:

Interestingly enough, Samsung is rumored to bring Qualcomm to Exynos markets and vice versa for the first time in the Galaxy S history. The Galaxy S22 lineup could launch with the Snapdragon 898 in India, while Verizon Wireless may want to bring the Exynos 2200 model to the USA.

Update 1: Samsung is working on another model number besides the usual SM-S90xN, SM-S90xB, and SM-S90xU, for countries in Africa and Asia.

Update 2: The Galaxy S22 series in the USA and Africa-Asia should be equipped with the Snapdragon 898 chipset. The Exynos 2200 SoC will be used for South Korea and Europe.

Samsung confirmed that the first big Galaxy Unpacked event of the year will take place on February 9. That’s when the company will unveil the Galaxy S22 series, and possibly the Galaxy Tab S8 lineup.

Every bit of recent evidence indicates that the Galaxy S22 Ultra will have a dedicated S Pen slot just like a Galaxy Note flagship. Because of this, some reports said the phone will be renamed and hit the shelves as the Galaxy Note 22 Ultra. But according to more recent information, the flagship will go on sale bearing the “Galaxy S22 Ultra” moniker.