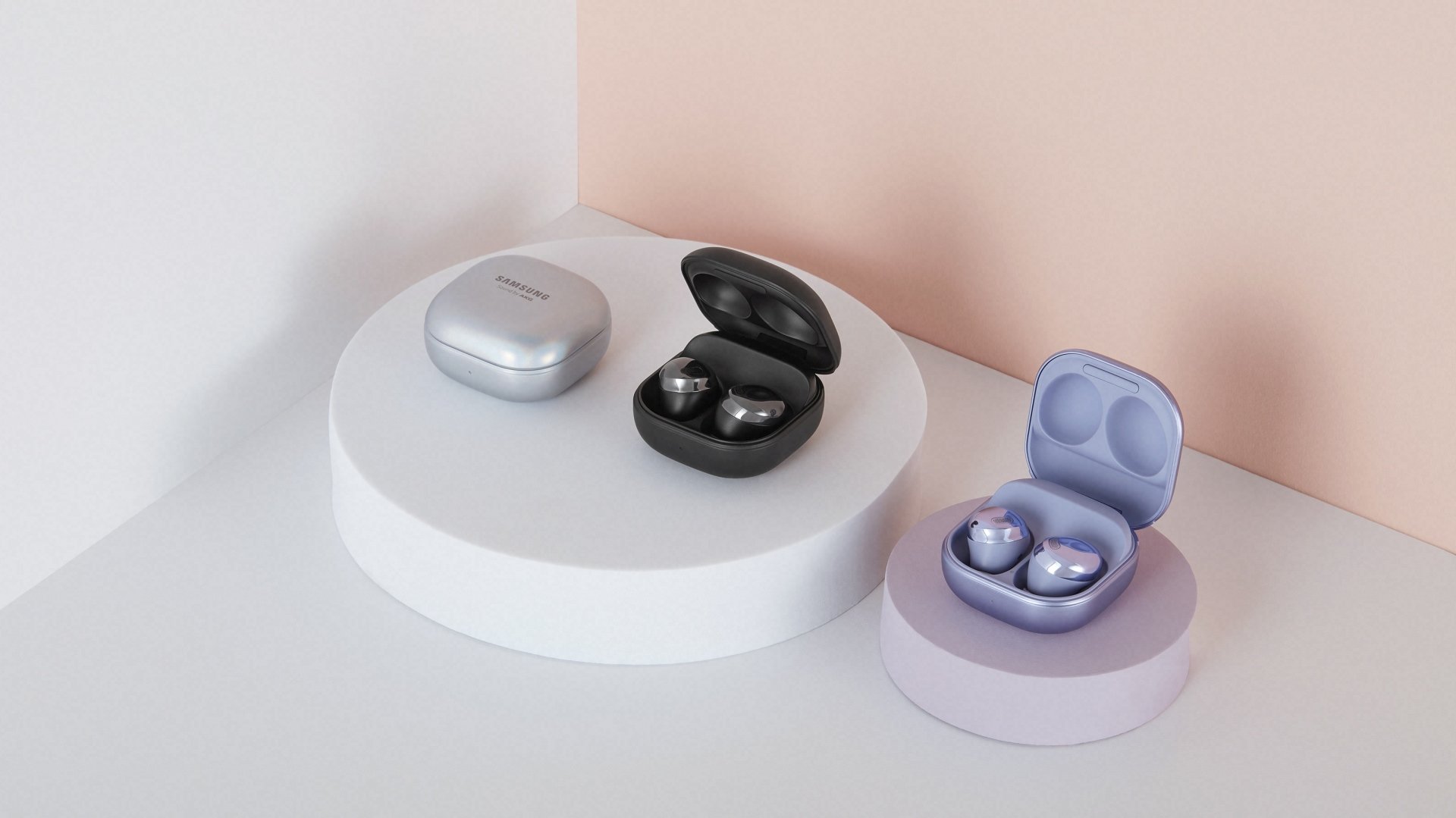 Samsung unveiled its second pair of wireless earbuds equipped with ANC (Active Noise Cancellation) at Unpacked 2021. Known as the Galaxy Buds Pro, the new earbuds combine the best characteristics of the Galaxy Buds+ and the Galaxy Buds Live in a single package while adding new features and improving upon existing ones. 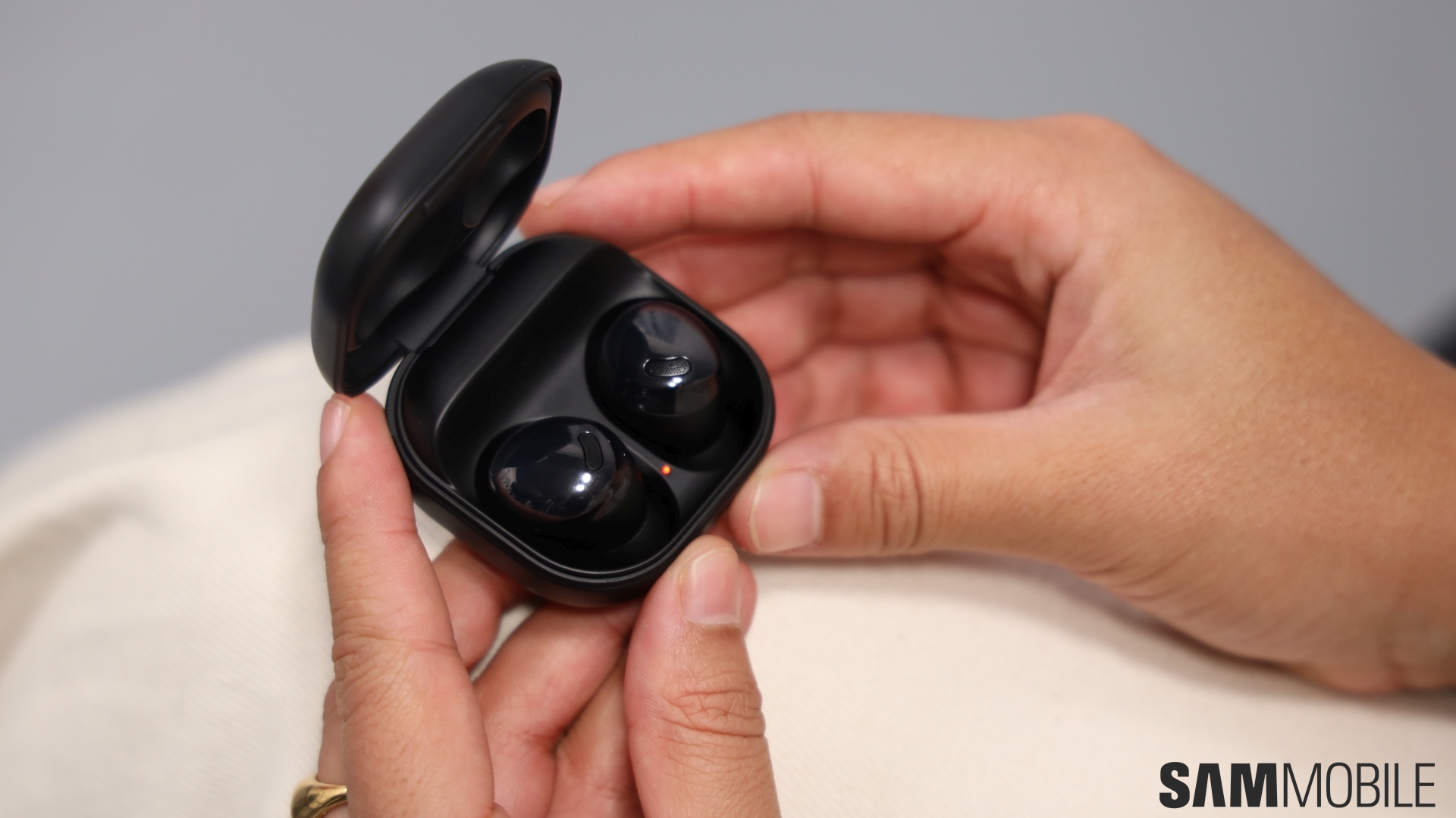 The use of the Pro moniker is partly justified by a higher water resistance rating as well as other hardware and design improvements. These changes, however, led to an increase in price of roughly 15% over the previous generation.

While the Galaxy Buds Live were an ambitious take on wireless earbuds design, the newer Galaxy Buds Pro revert back to an in-ear / canal-type design that’s similar to the Galaxy Buds+. This approach works in favor of ANC because the eartips provide an additional layer of passive noise cancellation. 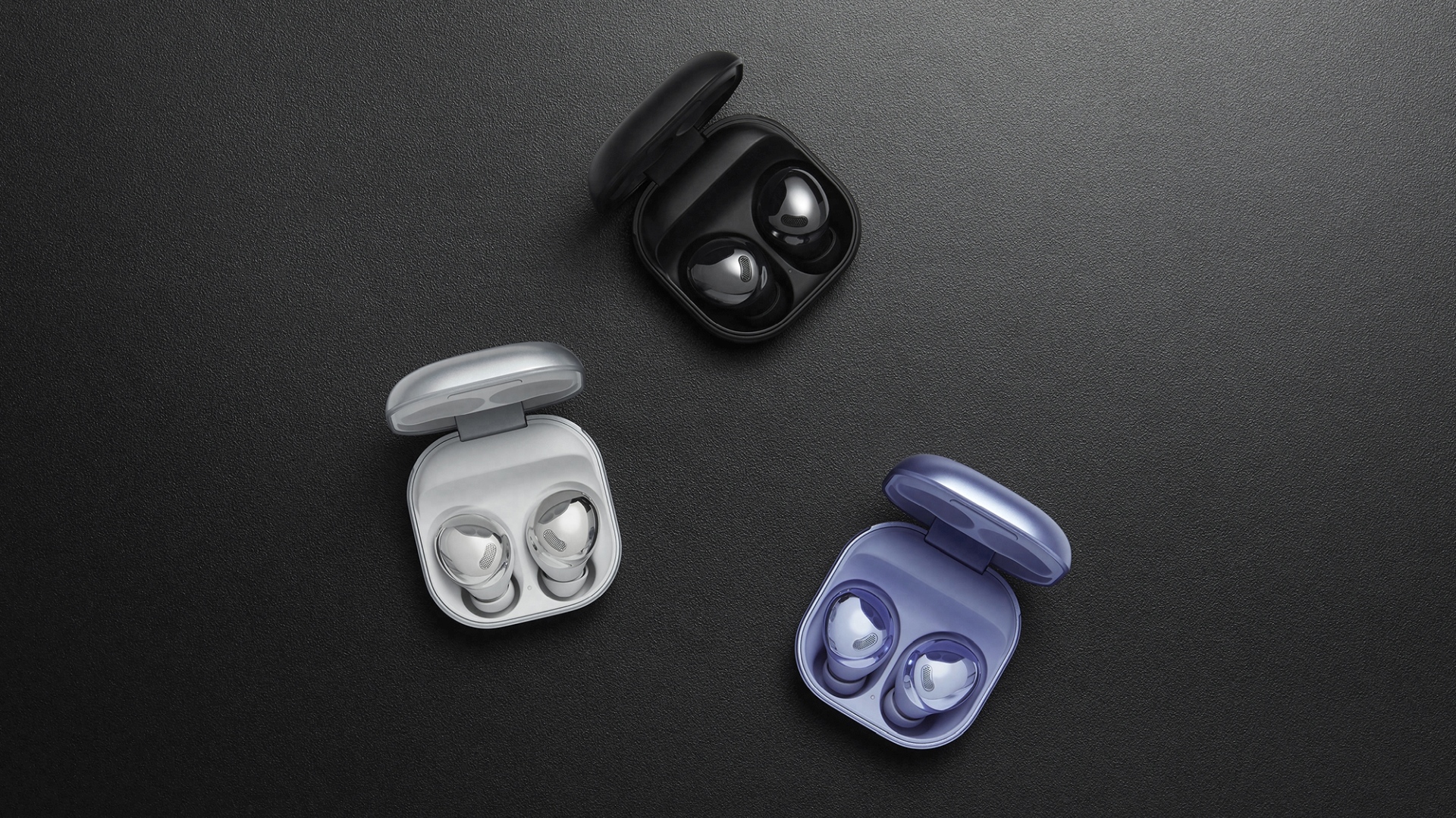 Each earbud measures 20.5 x 19.5 x 20.3mm and the charging case measures 50 x 50 x 27.6mm. In South Korea, Samsung is selling custom charging case skins shaped like two of the company’s popular flip phones of the early 2000s. They add a strong sense of nostalgia to a product that was released in 2021.

Samsung’s latest wireless earbuds boast a custom-built 2-way speaker system with sound by AKG, wherein a 11mm woofer and a 6.5mm tweeter work together to provide an improved sound quality over the previous generations.

ANC and Ambient Sound were also improved by the in-ear design itself as well as: an inner mic, a high SNR mic for picking up the user’s voice, and an inner dual-mic array for improved beamforming performance. 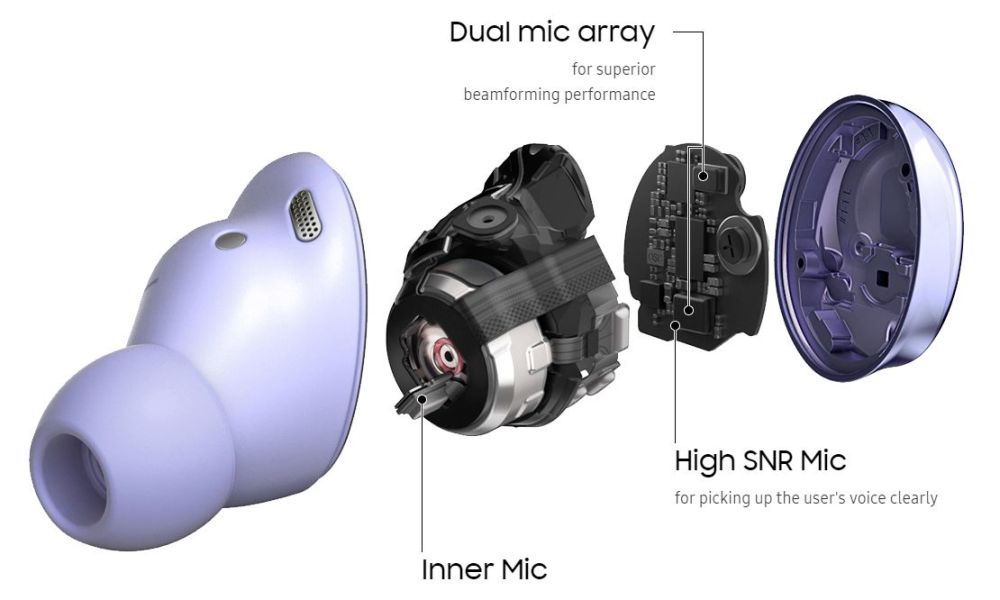 Another big improvement over the previous generation lies in the higher IPX7 water resistance rating. It should keep the Galaxy Buds Pro safe from water damage even when submerged in up to 1 meter of fresh water for half an hour. The earbuds support Bluetooth 5.0 connectivity and they’re compatible with smartphones specced with at least 1.5GB of RAM and Android 7.0 or later.

SamMobile exclusively revealed that the Galaxy Buds Pro will support Active Noise Cancellation nearly two months before Unpacked 2021, so the event wasn’t much of a surprise in this regard. The quality of ANC compared to the previous generation, however, is surprisingly good. 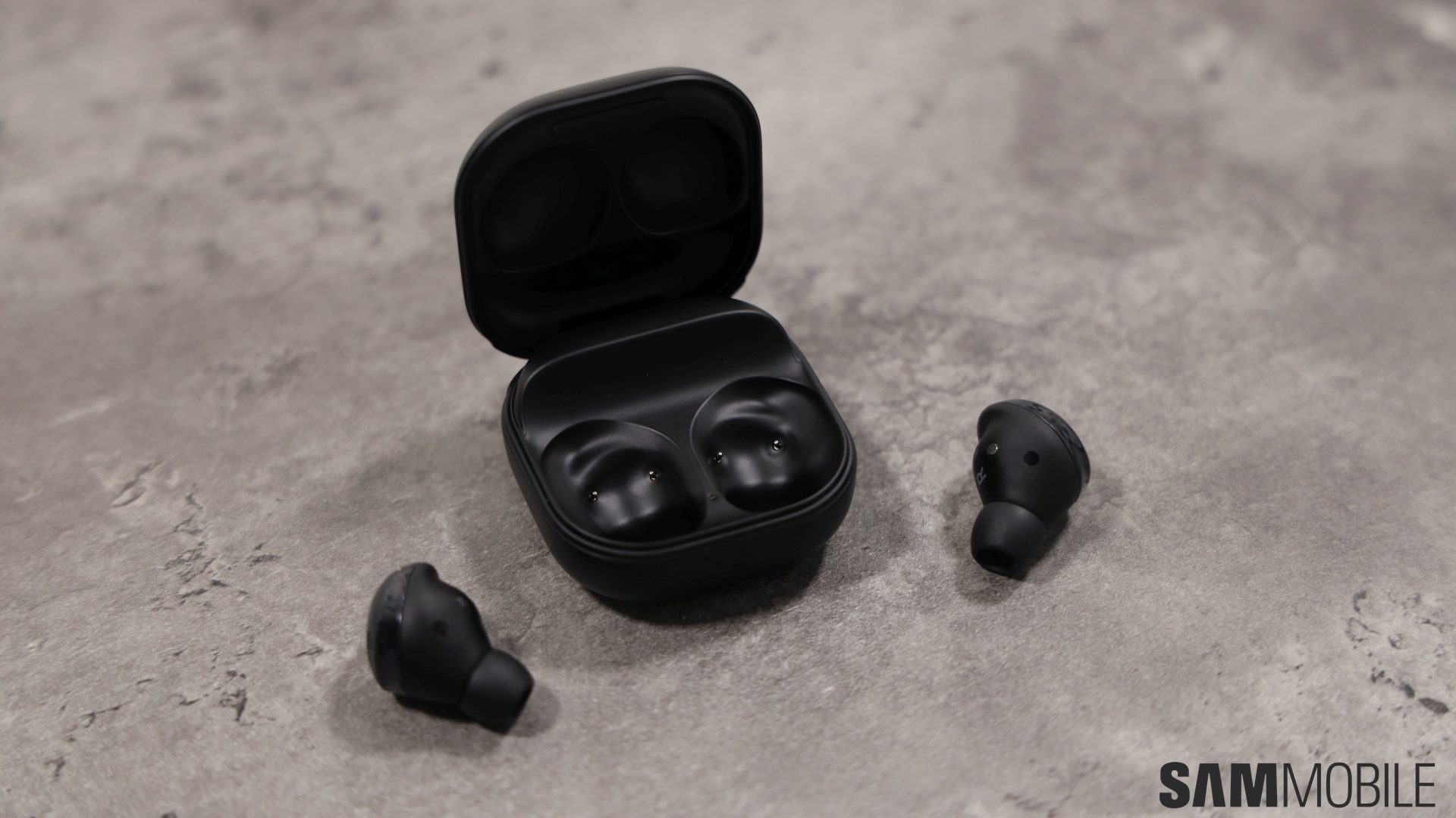 Users can choose between a couple of different ANC levels, each for a different sound environment. Furthermore, ANC now works in harmony with Ambient Sound, so the Galaxy Buds Pro can switch from ANC to Ambient Sound on the fly if the user’s voice is picked up in a conversation.

Bixby voice wake-up is par for the course, and so are the touchpad controls and optional eartips.

All the extra features that were added to the Galaxy Buds Pro meant that Samsung had to increase the product’s launch price, and the new earbuds were introduced for $200. Buyers could decrease the cost by $50 through Samsung’s trade-in program.

The Galaxy Buds Pro earbuds were unveiled on January 14, 2021, and they were accompanied on stage by the Galaxy S21 flagship phone series. They were scheduled to ship by January 29 in most markets.

SamMobile offers readers various resources like Samsung APKs, firmware, and wallpapers. They are available to download for free.

Readers who sign up for an optional membership will benefit from additional perks such as expert support, giveaways, faster firmware downloads and ad-free browsing on our website, and more. 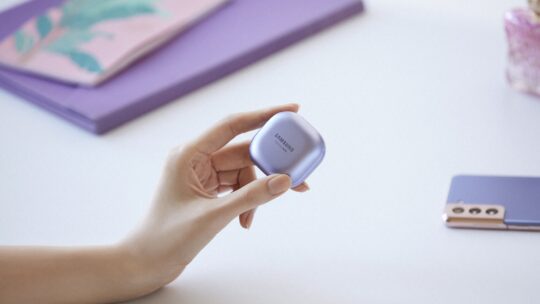 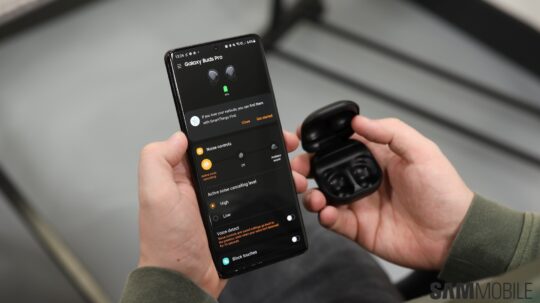 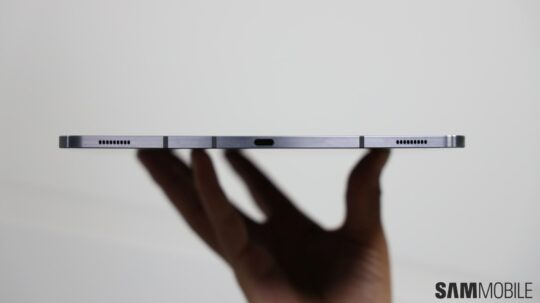 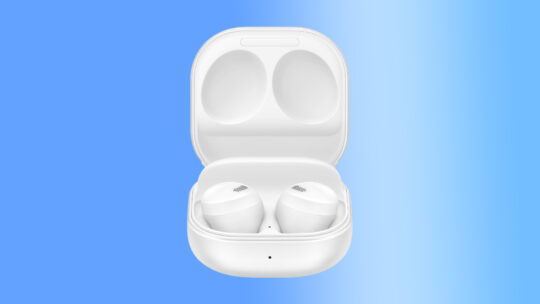