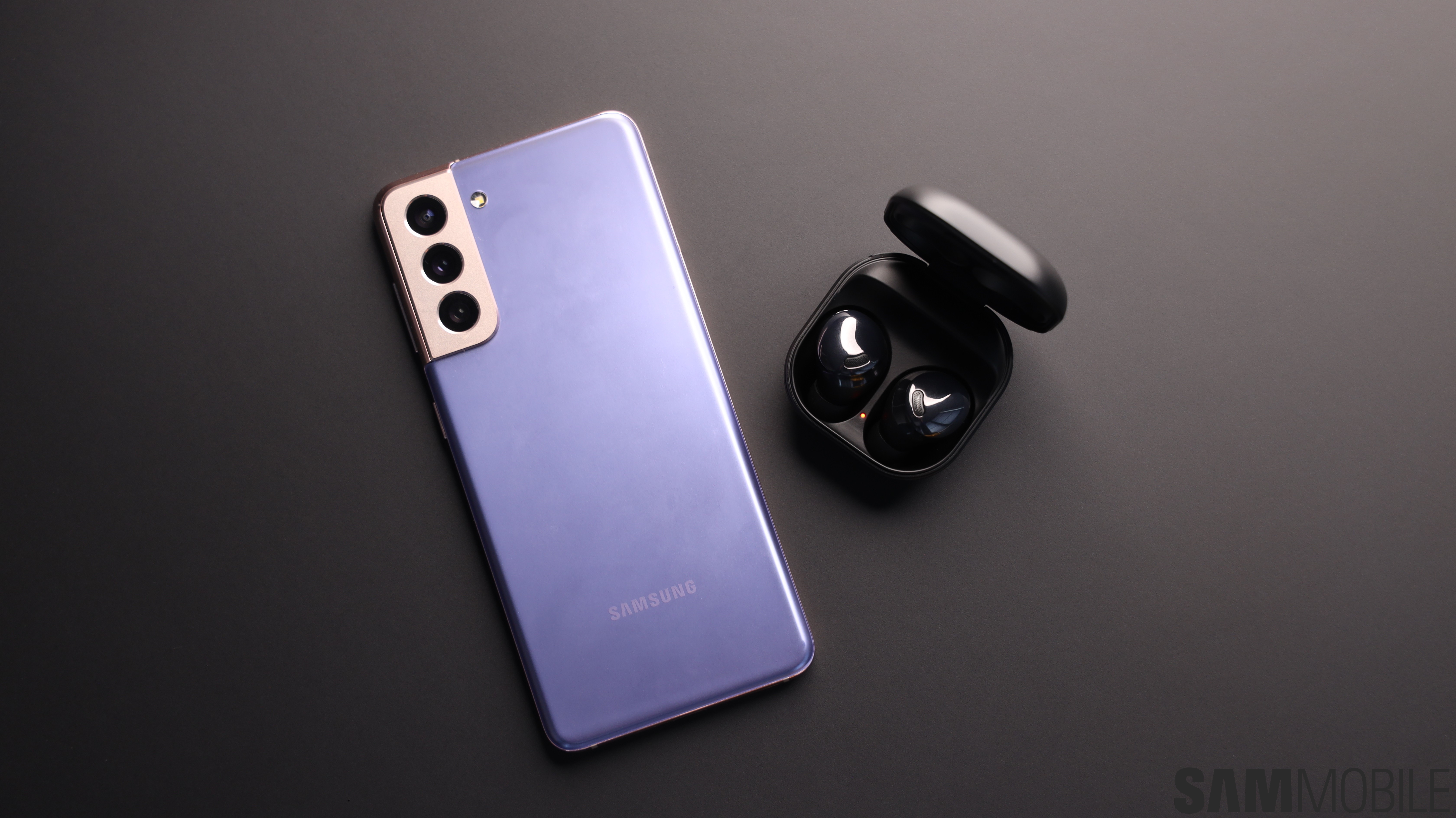 It’s a new year and Samsung has a new pair of wireless earbuds for us to review. Arriving merely six months after the Galaxy Buds Live, the Galaxy Buds Pro are Samsung’s second earbuds to feature Active Noise Cancellation.

These earbuds are the true successors to Samsung’s Galaxy Buds/Buds+. They have a similar design but many new improvements under the hood. This makes them seem, at least on paper, much better than any previous Samsung earbuds.

In this Galaxy Buds Pro review, we’ll closely look at all of the improvements that Samsung has made. We’ll see if the sound quality really has been improved. Perhaps most importantly, we’ll put the advanced Active Noise Cancellation to the test. So let’s dive right in. 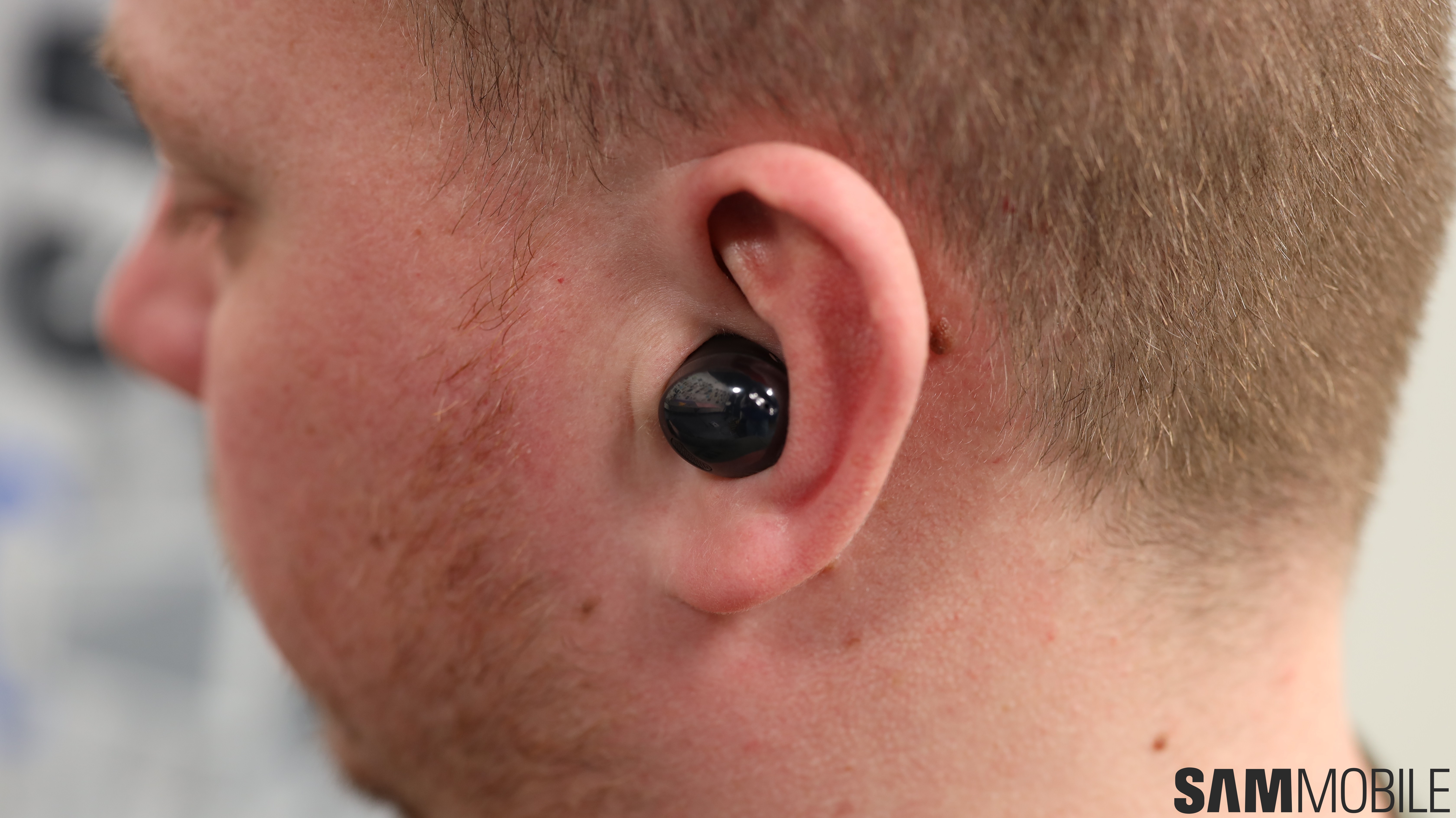 To ensure a more comfortable fit, Samsung opted for a low-profile, ergonomic design. This reduces the contact area between the ear and the bud to minimize the clogged-up feeling that most users will be quite familiar with. That’s something we didn’t particularly like about the Galaxy Buds or Buds+ for that matter. Wearing them for extended periods of time was uncomfortable.

The minor design changes Samsung has made here do make a big difference. They don’t protrude out of the ear much and certainly feel more comfortable to wear for much longer. This comfort hasn’t come at the cost of a secure fit, though. The Galaxy Buds Pro fit securely in the ear canal and they remain firmly in place even during the most intense workouts. 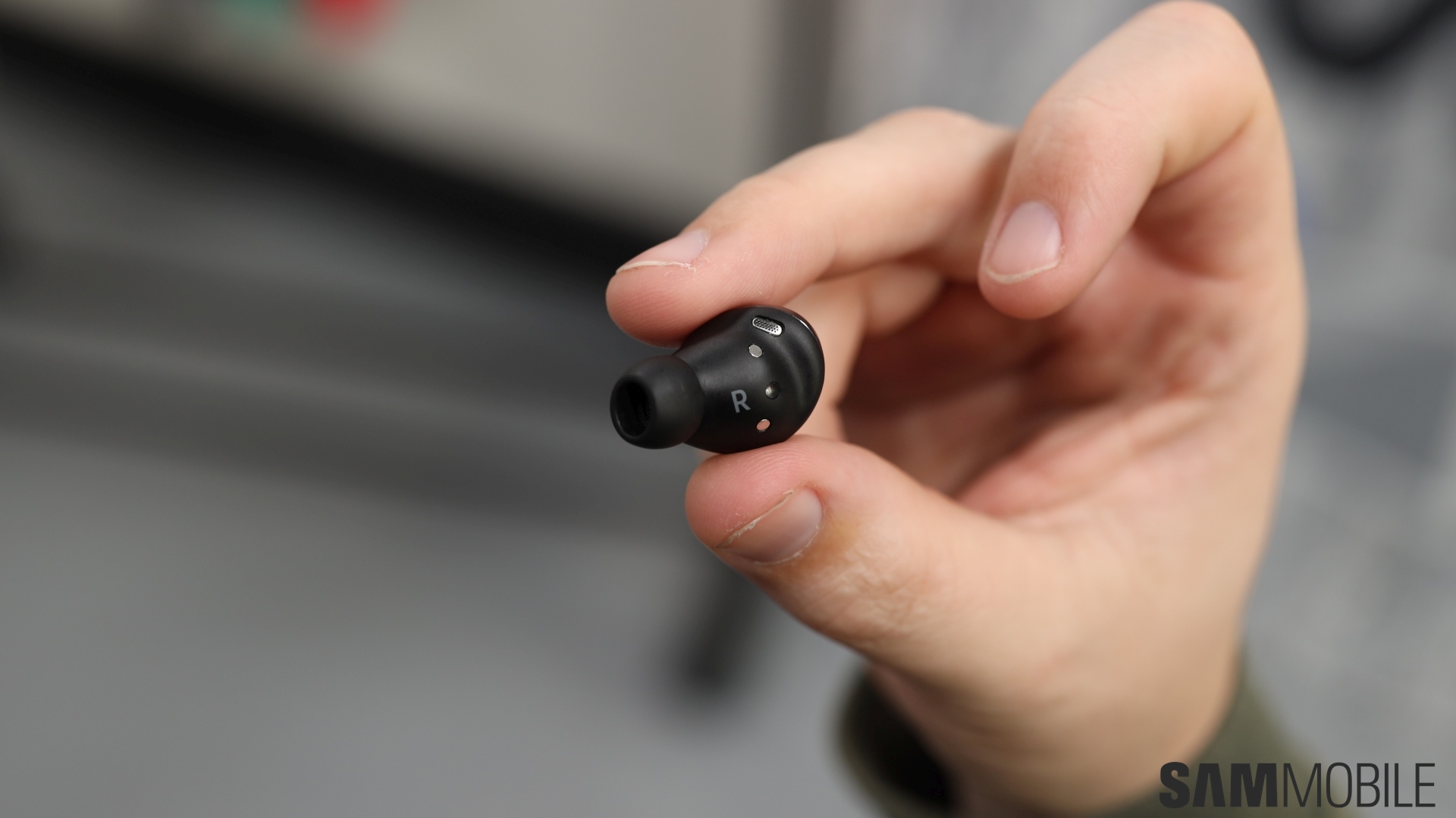 The unassuming, understated design isn’t as eye-catching as the Galaxy Buds Live but Samsung has added some glossy elements to the shell to make them stand out. This is going to be an acquired taste. We felt that a matte finish would have been better. It would certainly have matched more precisely with the Galaxy S21’s matte finish but this is only a minor inconvenience if you don’t like the glossy look.

The touch panels on the earbuds often feel too sensitive so accidental touches are unavoidable. This has been the case with all previous Galaxy Buds. As irritating as that may be, the touchpad serves an important purpose. It allows you to control playback, increase/decrease volume, skip tracks, launch Bixby and more with simple taps and gestures. You can customize them via the Galaxy Wearable app which also allows you to lock the touchpads if you’d like.

Durability was on Samsung’s mind when it built these. The Galaxy Buds Pro have an IPX7 rating, the highest water resistance standard of any product in the Galaxy Buds series. This gives you the peace of mind that you can use them in all weather conditions and that even the sweatiest of workouts won’t wreck them.

There’s not much to complain about as far as the design is concerned. The build quality seems solid and the earbuds are nicely put together. The slimmer design provides a comfortable fit. There’s little to no discomfort when using them for a long time, which is basically what most users are mainly concerned about when looking at earbuds to buy. The Galaxy Buds Pro does spectacularly well in that department. Samsung has focused a lot on improving the sound quality that its latest earbuds provide. It has added two-way speakers that include an 11mm woofer and a 6.5mm tweeter. Obviously, there are a lot of claims of detailed sound and full bass attached to these speakers in Samsung’s marketing materials, but how do they actually perform?

The two-way speakers Samsung is using for the Galaxy Buds Pro do sound much better than all of its previous earbuds. They certainly provide a very enjoyable listening experience. They create a pleasant soundstage with clear treble and surprisingly punchy and well balanced bass. The output from these tiny earbuds is quite impressive.

There are plenty of EQ settings to choose from if you’d like to tweak the sound. Choose “Bass boost” if you’d like more oomph or “Treble boost” if you want the higher frequencies to stand out more. Compared to the Galaxy Buds Live, there’s significantly less sound leakage, so people around you won’t be disturbed even if you’re listing to Drake on full blast, though I’m not sure why anybody wouldn’t like Drake.

To sum it all up, there’s merit in Samsung’s claims. It’s tough competing with more high-end options from the likes of Sony and Bose, but the Galaxy Buds Pro do offer a very enjoyable listening experience. 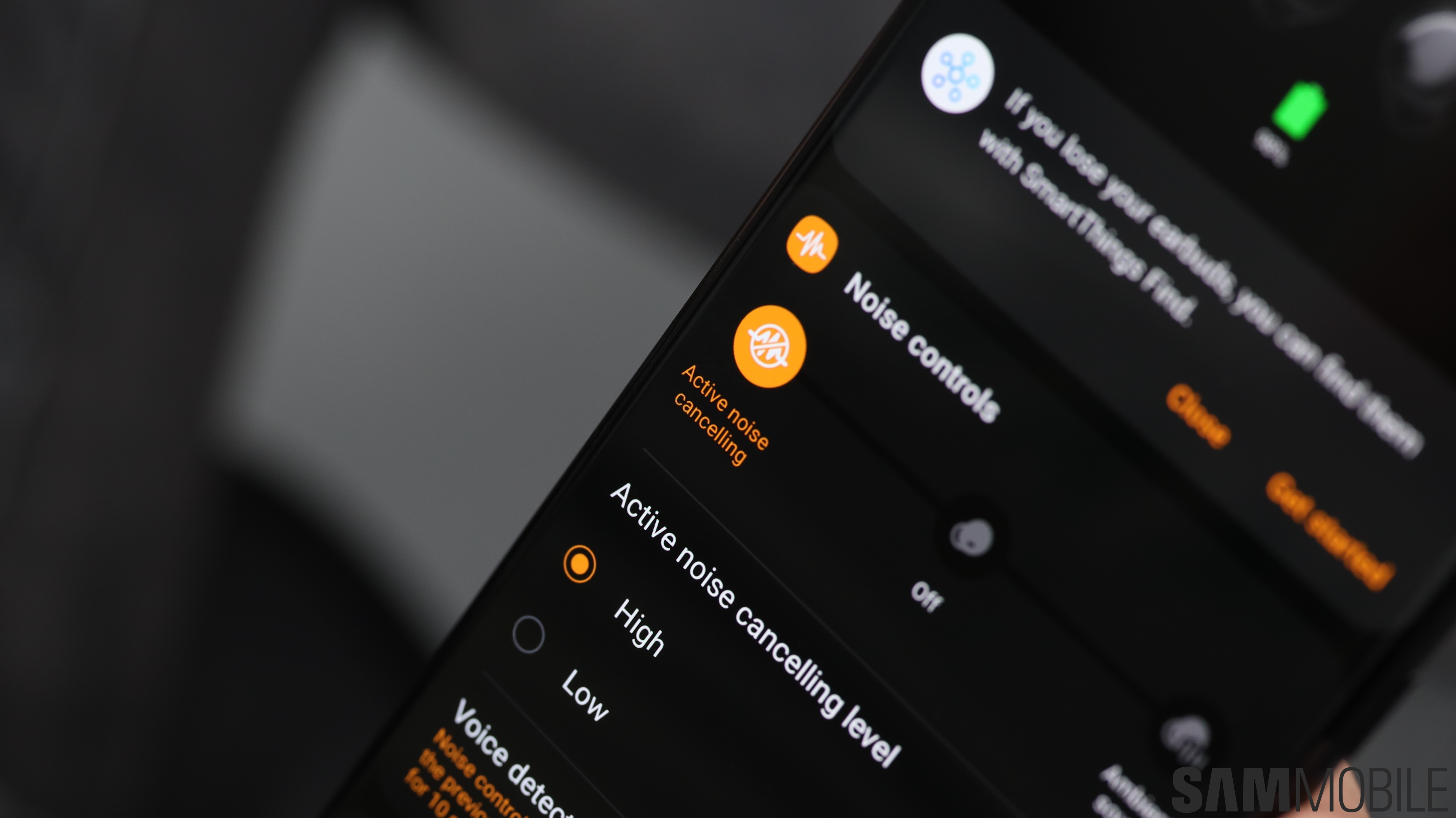 These are the first in-ear design earbuds from Samsung to feature Active Noise Cancellation. ANC left a lot to be desired on the Galaxy Buds Live, partly because of their design. The in-ear design already provides a bit of sound isolation and that provides a great base for ANC to work off of.

Samsung says that the Galaxy Buds Pro can cancel out 99% of external background noise. That’s a tall claim but if you use ANC on the new earbuds after using the Galaxy Buds Live, you’ll instantly notice that it’s much better on the Galaxy Buds Pro. The ANC level is actually adjustable. You can choose between High and Low depending on the environment you’re in.

The Galaxy Buds Pro are perfectly capable of canceling out the background noise in your home or office. Outside, even when turned up to High, ANC won’t tune you out from your surroundings. You’ll notice the sound of cars speeding by you which is probably a good thing. It’ll be interesting to see how good the Galaxy Buds Pro are at canceling out engine noise on a flight, we can’t say for sure since we haven’t jumped on a plane for quite some time now.

What we’re absolutely blown away by is the Advanced Ambient Sound mode. It allows you to amplify nearby voices so that you’re always aware of your surroundings even when you’re immersed in your favorite song. It’s quite the improvement over earlier models that made amplified noises sound very robotic. There are four levels of amplification to choose from – Low, Medium, High and Extra High. Cycle through the options and you’re bound to land on one that best fits the environment you’re in.

Voice detect is perhaps the most useful feature on the Galaxy Buds Pro. ANC and Ambient Sound work together intelligently so that you can have conversations and interact with people around you without having to take the earbuds out or manually turn the volume down. There’s an accelerometer inside the earbuds that picks up jaw movement to know when you’re speaking.

It then switches from ANC to Ambient Sound so that you can have the conversation. Once it senses that you’ve stopped talking for a few seconds, ANC resumes and your music plays at the same volume as before. Do keep in mind, though, that this feature will trigger even if you like to sing along to your favorite songs. 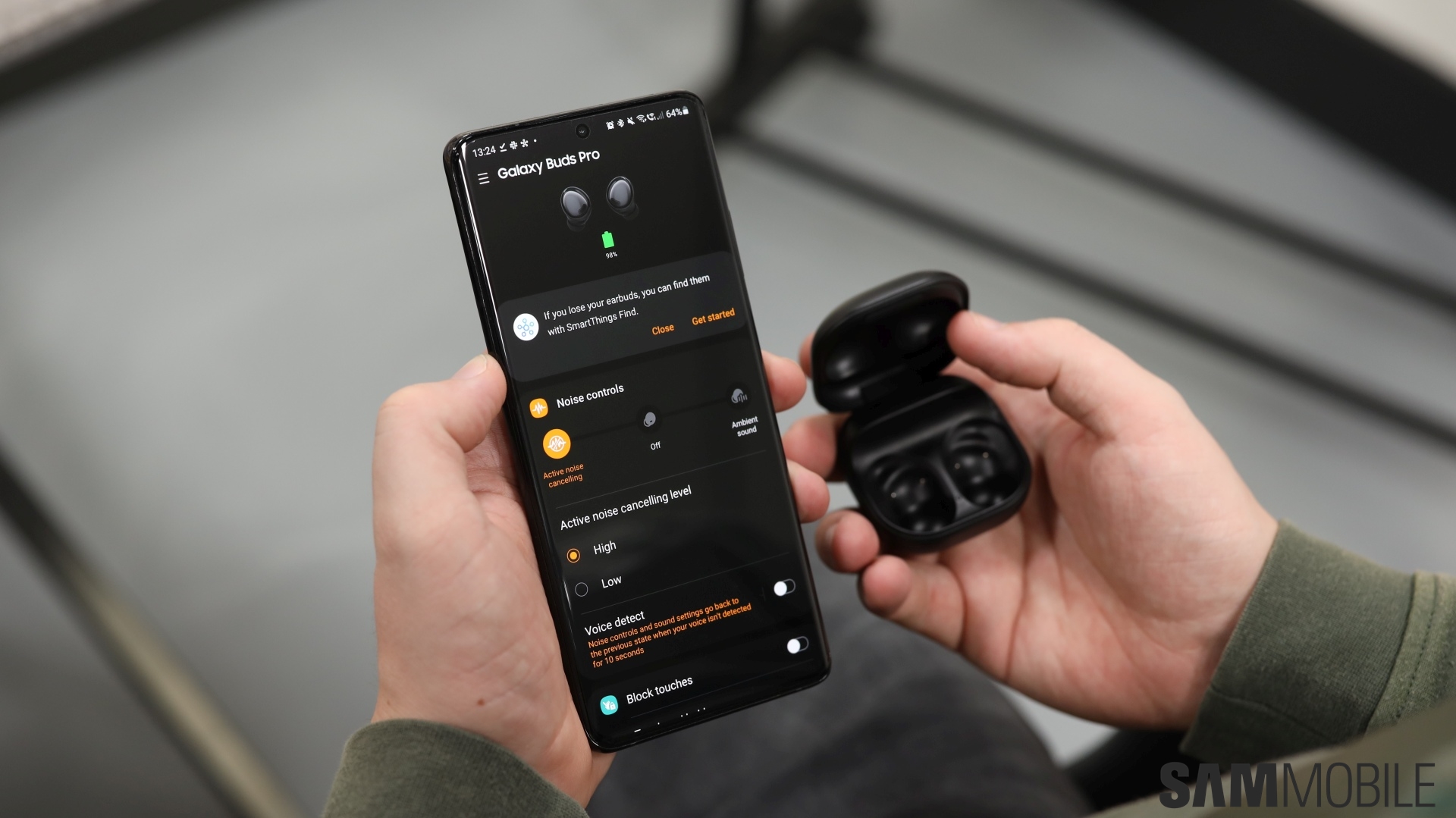 Call quality has always been less than ideal on Samsung’s earbuds, there’s a noticeable improvement in the Galaxy Buds Pro. Each earbud has two outer mics and one inner mic. The less protrusive shape of the earbud already reduces wind contact area and the effect of wind is further reduced through the mesh-covered Wind Shield chamber.

The earbuds use beamforming to isolate your voice so that it can be clearly picked up for audio calls. The result is a much better calling experience than what we’ve seen with other earbuds from Samsung. The hardware upgrades are definitely playing their part here. Getting absolutely perfect call quality from truly wireless earbuds is a tall ask, but the Galaxy Buds Pro manage to provide respectable quality. 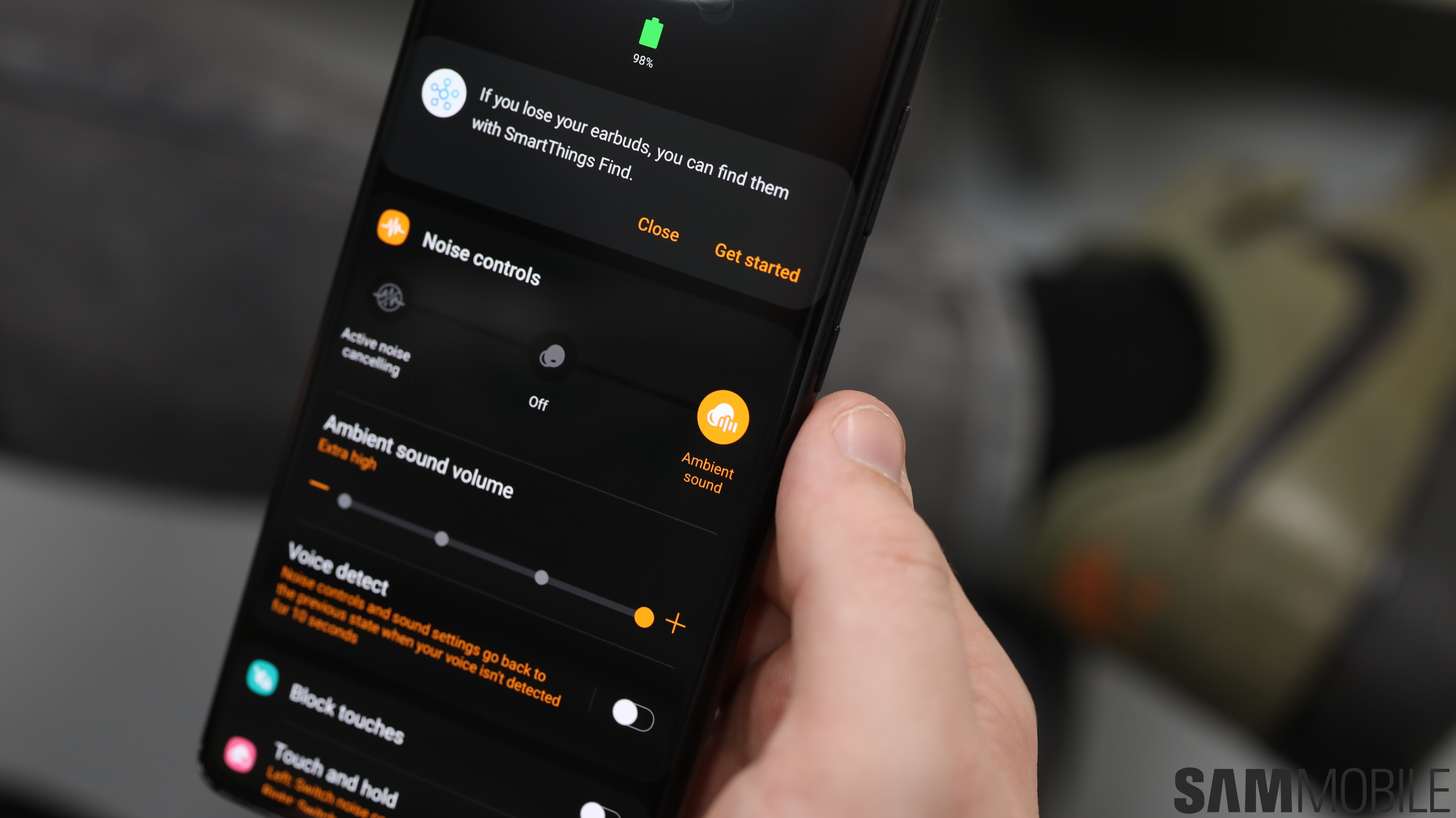 There are a number of familiar features available. This includes hands-free Bixby Voice wake up with the “Hi Bixby” command. Swift Pair, which allows for easy pairing of the earbuds with a Windows 10 PC, is also present. Game Mode is another useful feature. It reduces the lag between audio and video when playing games on the device.

Samsung has also introduced a couple of new features with 360 Audio being a particular highlight. It replicates multi-dimensional sound with Dolby Head Tracking to provide “theater-like” sound. There’s a lot of wizardry that goes behind making this happen. The 360 Audio feature can be enabled via the Galaxy Wearable app.

Do keep in mind that it requires One UI 3.1 which is only going to be available on the Galaxy S21 series initially. We tested out the feature on our Galaxy S21 Ultra and found that it works as advertised. You can really feel which direction the sound is coming from even when moving your head.

Another One UI 3.1-only feature is Multi-Mic Recording. You can capture recordings using the mics on both a compatible Galaxy smartphone and the Galaxy Buds Pro. This is a great feature for YouTubers and vloggers in particular and it works very well.

Auto Switch is a new addition as well. It enables the Galaxy Buds Pro to automatically switch between Galaxy devices. You could be watching Netflix on your tablet when you receive a call on your Galaxy smartphone. Auto Switch will let you answer the call with the Galaxy Buds Pro and once it’s over, the earbuds will automatically switch back to the tablet so you can continue watching your show. No manual input required.

Samsung has limited Auto Switch to its own ecosystem. You can’t use it with any other Android device. Laptops are out of the question as well even though this feature would be a perfect fit, especially now since most people are working at home with multiple devices. 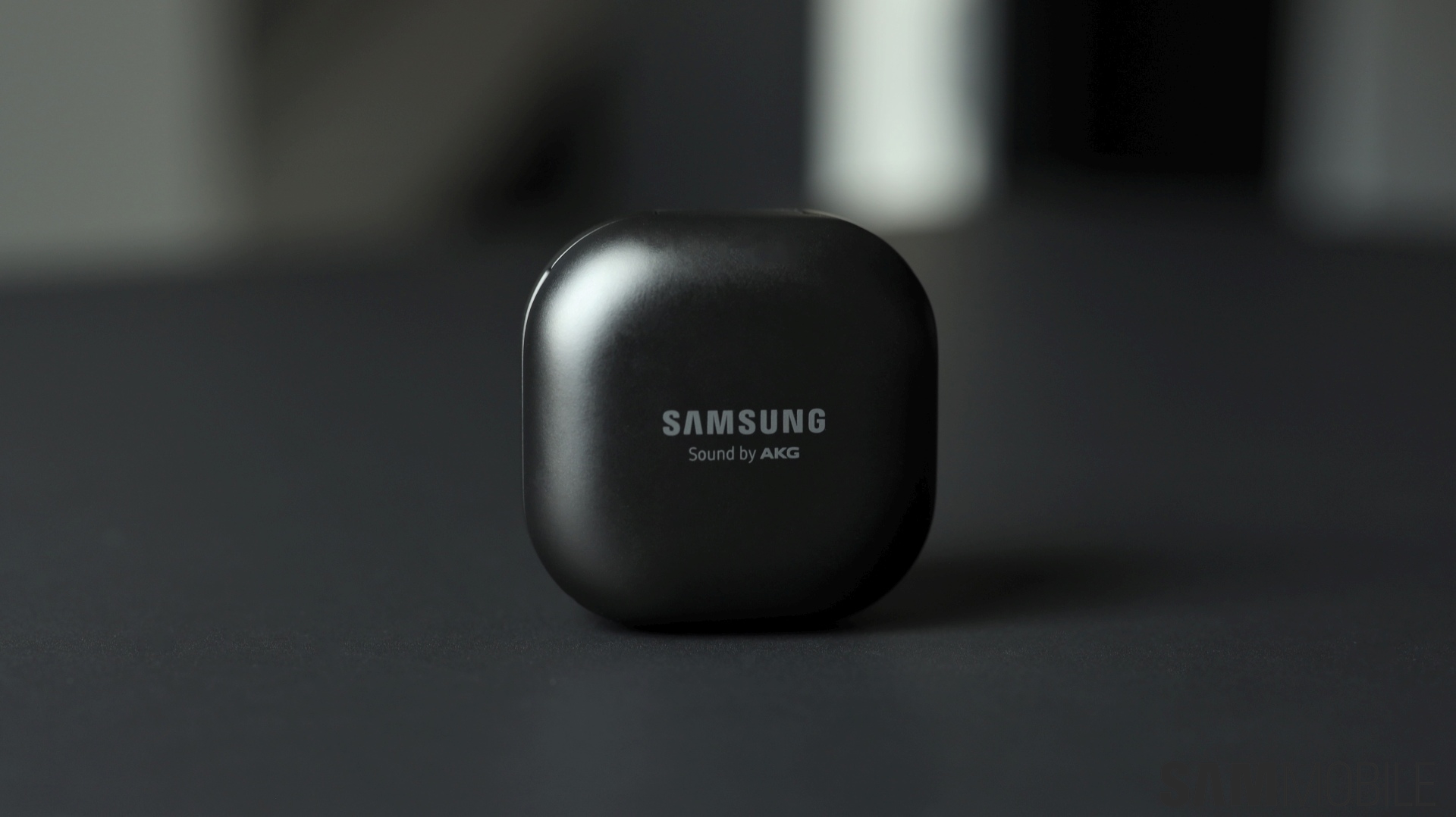 The Galaxy Buds Pro provide you with decent but not remarkable battery life from their 61mAh batteries. The charging case has a 472mAh battery that can provide an hour of listening time with just a 5 minute quick charge.

Real world performance is quite similar to Samsung’s published figures. It’s not bad at all but again, not entirely remarkable, either. There are obviously size limitations with earbuds so we’ve got to make the most of what we can get. Even with heavy use throughout the day with ANC and other special features, you can get a full day’s use out of it but you’ll need to charge them before heading out in the morning.

For those who are committed to the Samsung ecosystem, the Galaxy Buds Pro are definitely worth the $199 asking price. Features like Auto Switch and 360 Audio are how Samsung gets them their money’s worth with these earbuds. Buy them without a second thought if you’ve already bought a Galaxy S21 and are now on the hunt for earbuds.

The Galaxy Buds Pro are also worth the asking price even if you’re not entirely within the ecosystem. They’re better than any other Samsung earbuds at providing an elevated listening experience. The ANC is also much more effective compared to the Buds Live.

They look good, too, though we would have preferred a matte finish over glossy. The fit is secure and very comfortable indeed with the IPX7 rating being a plus point as well. What we have here is basically a perfect blend of everything that was great about the Galaxy Buds+ and Galaxy Buds Live.

So should you buy them? As far as truly wireless earbuds in this range go, the Galaxy Buds Pro are the best that Samsung has made so far. I’d even urge you to consider them if you already own a pair of the earlier Buds. The improvements in sound quality alone are enough of a reason to.

[Result] SamMobile Weekly Giveaway: Get in the groove with the Galaxy …