Galaxy Buds Live review: Many reasons to buy but ANC isn’t one of them 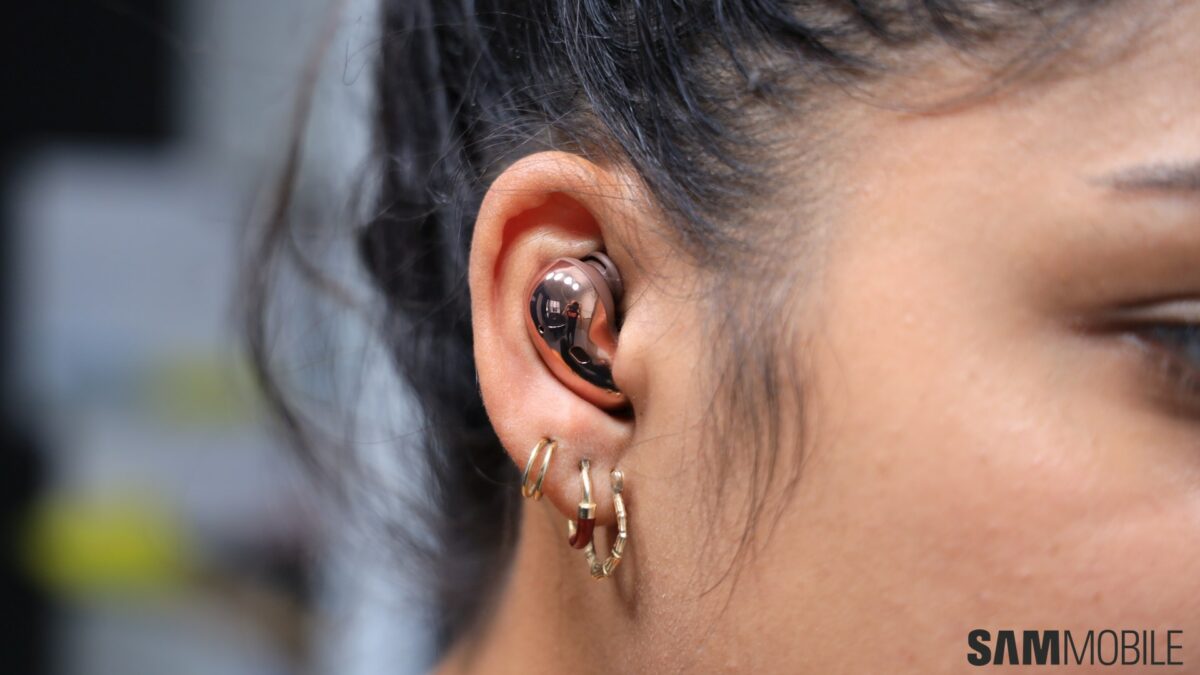 The Galaxy Buds Live are Samsung’s second truly wireless earbuds for 2020. In case you forgot, the Galaxy Buds+ were launched in February this year. They didn’t bring any significant upgrades apart from battery life and minor sound quality improvements. Active Noise Cancellation was a feature that many had been expecting and it wasn’t present.

It later became evident that Samsung would release an entirely new pair of earbuds in the second half of this year. They’re completely different than the earbuds we’ve seen from Samsung so far. The company has gone with a unique design and it has also upgraded the internals. They’re also the first among Samsung’s offerings to feature Active Noise Cancellation.

Are they really everything that Samsung makes them out to be? We have a lot of ground to cover so let’s dive right into this Galaxy Buds Live review.

Samsung has gone with a unique kidney bean-shaped design for the Galaxy Buds Live. It has designed them to look more like a fashion accessory while also being very comfortable to wear for extended use. In order to achieve this design, it had to lay out the internal components horizontally.

This has resulted in an added benefit that we particularly like. The Galaxy Buds Live don’t protrude from the ears, rather, they fit snugly. This also addresses one of my biggest pet peeves with the Galaxy Buds/Buds+. If you laid on your side with your face resting on your palm, it would often trigger the touchpad, causing whatever you were watching or listening to pause.

It has always been possible to lock the touchpad through the Galaxy Wearable app but then you have to go back in there and unlock it since the touchpad is actually very useful in every other situation. I’m glad to see that this frustration has been addressed with the Galaxy Buds Live. 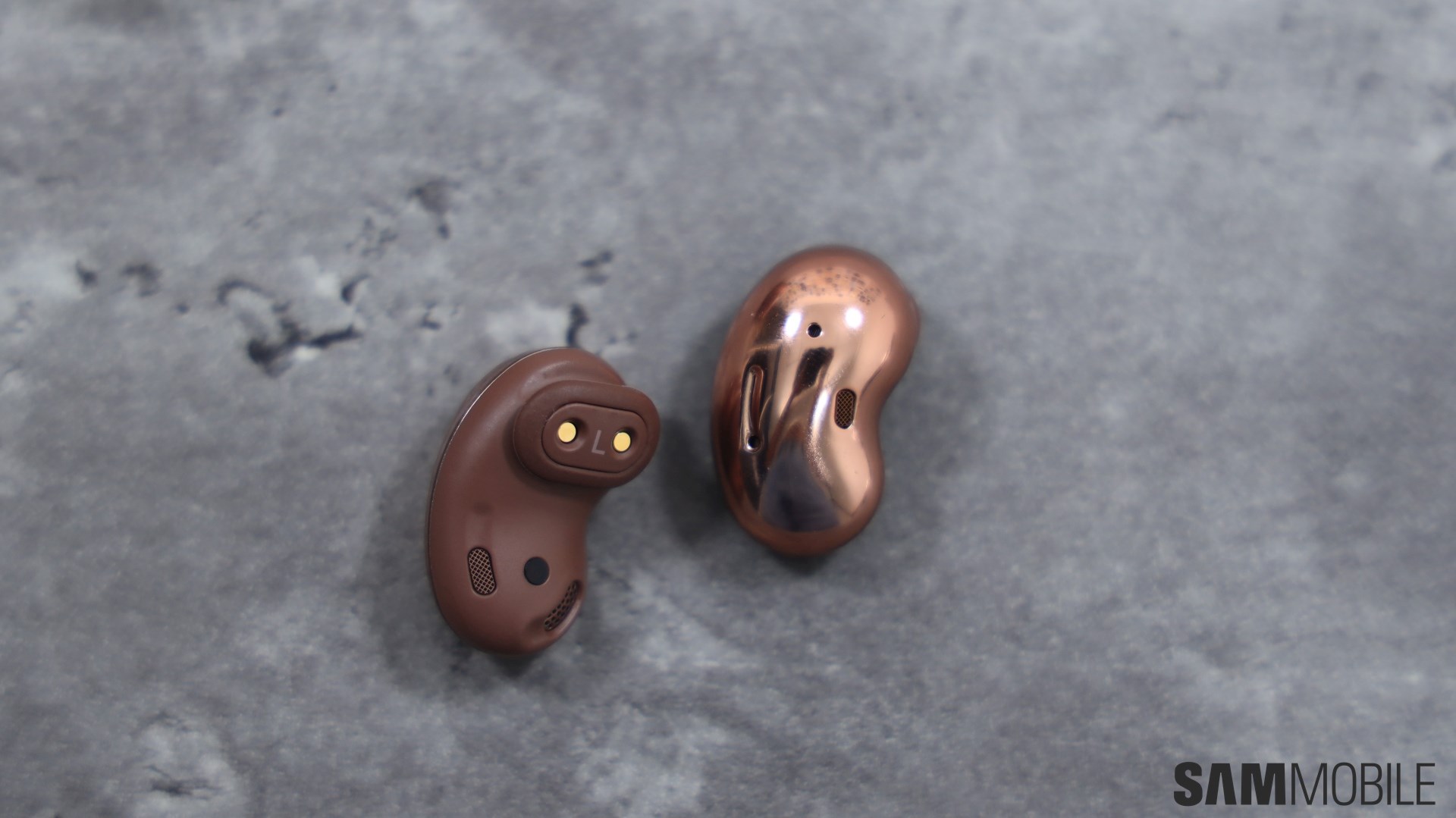 The Galaxy Wearable app will teach you the right way to wear the Galaxy Buds Live. You just have to make sure that the speaker is pointing in the direction of the lower part of your ear. Slide that part in first and then place the top of the earbud into your ear. From there, you can make any adjustments to get the right fit. Two sets of wingtips come in the box so finding the perfect fit won’t be difficult.

Sound isolation isn’t as great as we’ve experienced on the other Buds. That’s a consequence of this new design. It won’t really bother you but if you like listening to music on full blast, the person next to you on the train would be able to easily judge you on your music tastes. Guess that won’t be too big of an issue as long as we’re living in our socially distanced reality. 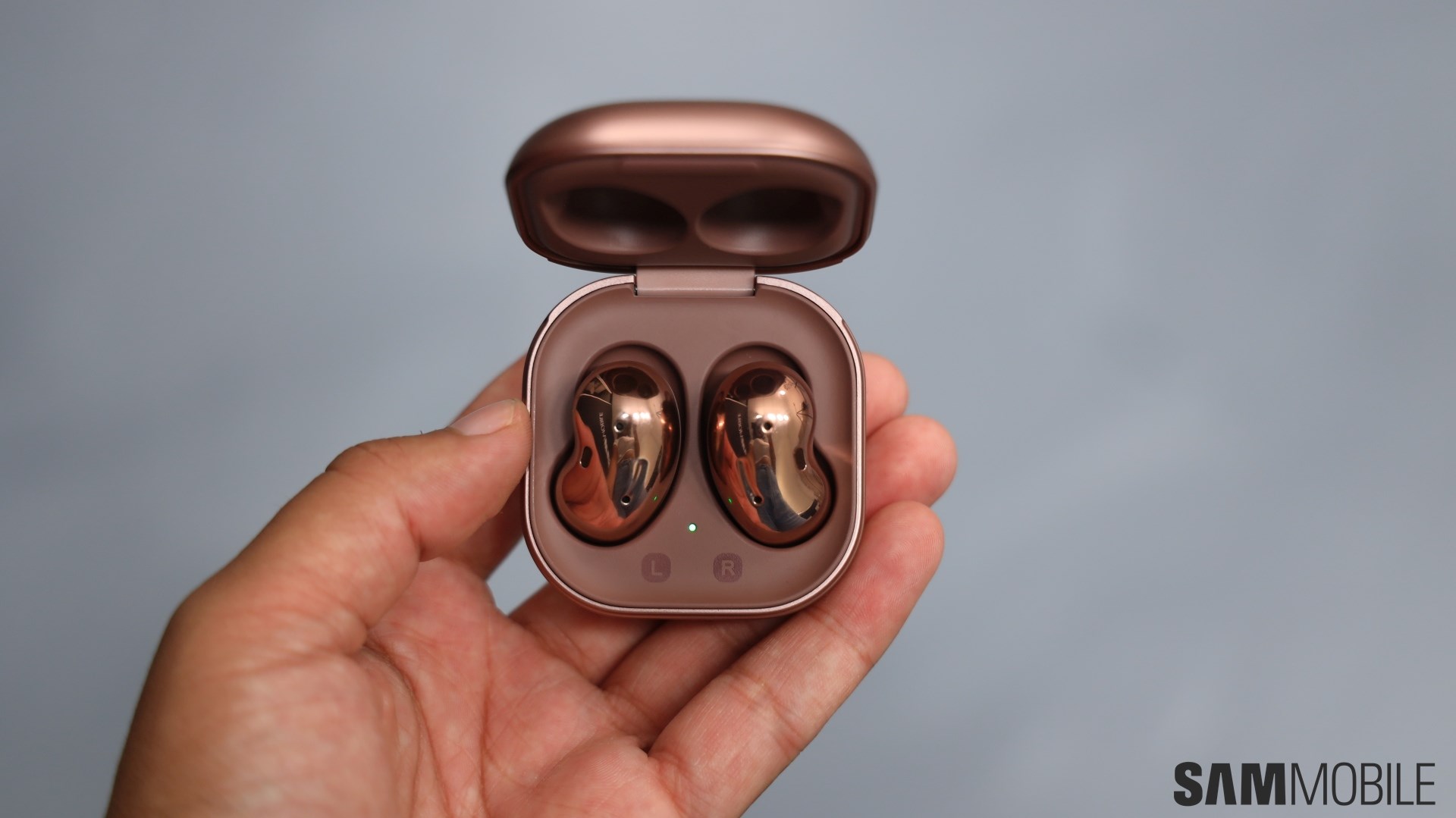 The touchpad on the Galaxy Buds Live makes for easy control. A single tap can play or pause your music, double tap can skip songs, receive or end calls while a triple tap can bring up the previous song. Tapping and holding on the touchpad can activate one of the many functions that you can choose from in the app, like waking up Bixby. 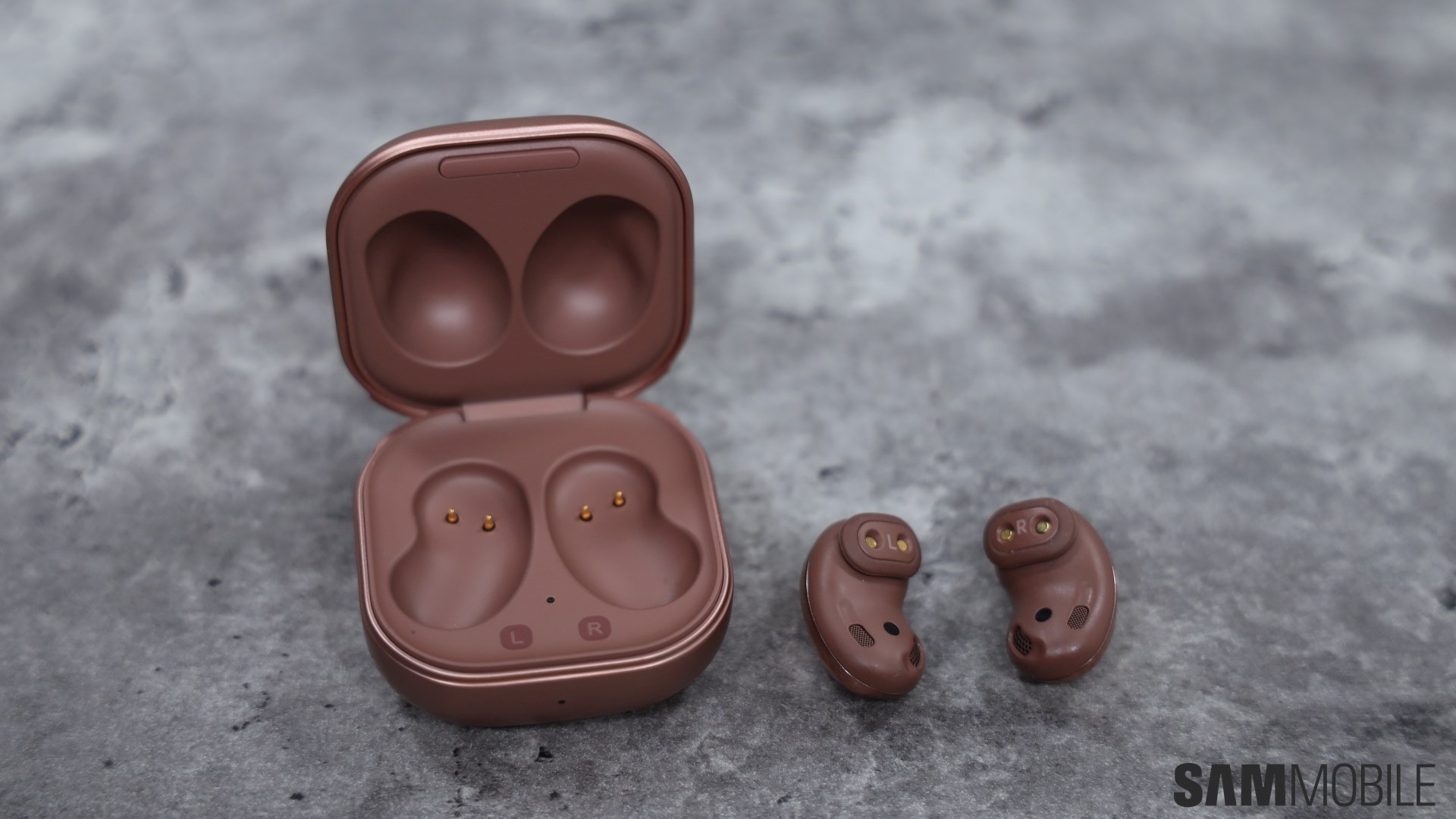 The Galaxy Buds Live aim to offer a more premium audio experience compared to its predecessor and they do succeed in this mission for the most part. The improvements are driven by a bigger AKG-tuned 12mm speaker and a separate bass duct. The duct is actually a clever piece of engineering to extract more out of this speaker.

There is a noticeable difference in the quality compared to earlier models. The Galaxy Buds/Buds+ were not bass heavy by any means. Granted, you can’t really expect such tiny speakers to output bass that can get your heart thumping, but a commendable effort has been made with the Galaxy Buds Live to add some extra oomph to the party.

The new speaker also improves the reproduction of mid and high frequencies which simply means that these earbuds don’t sound too basic, and that’s a good thing. The volume can get nice and loud without any crackling sounds when it’s turned up all the way. We also didn’t experience any Bluetooth connection dropouts during our tests.

The easiest way to describe the Galaxy Buds Live sound quality without getting all technical is that it’s good for a product of this kind. It will be an enjoyable experience for you, more so than it was on the earlier models. 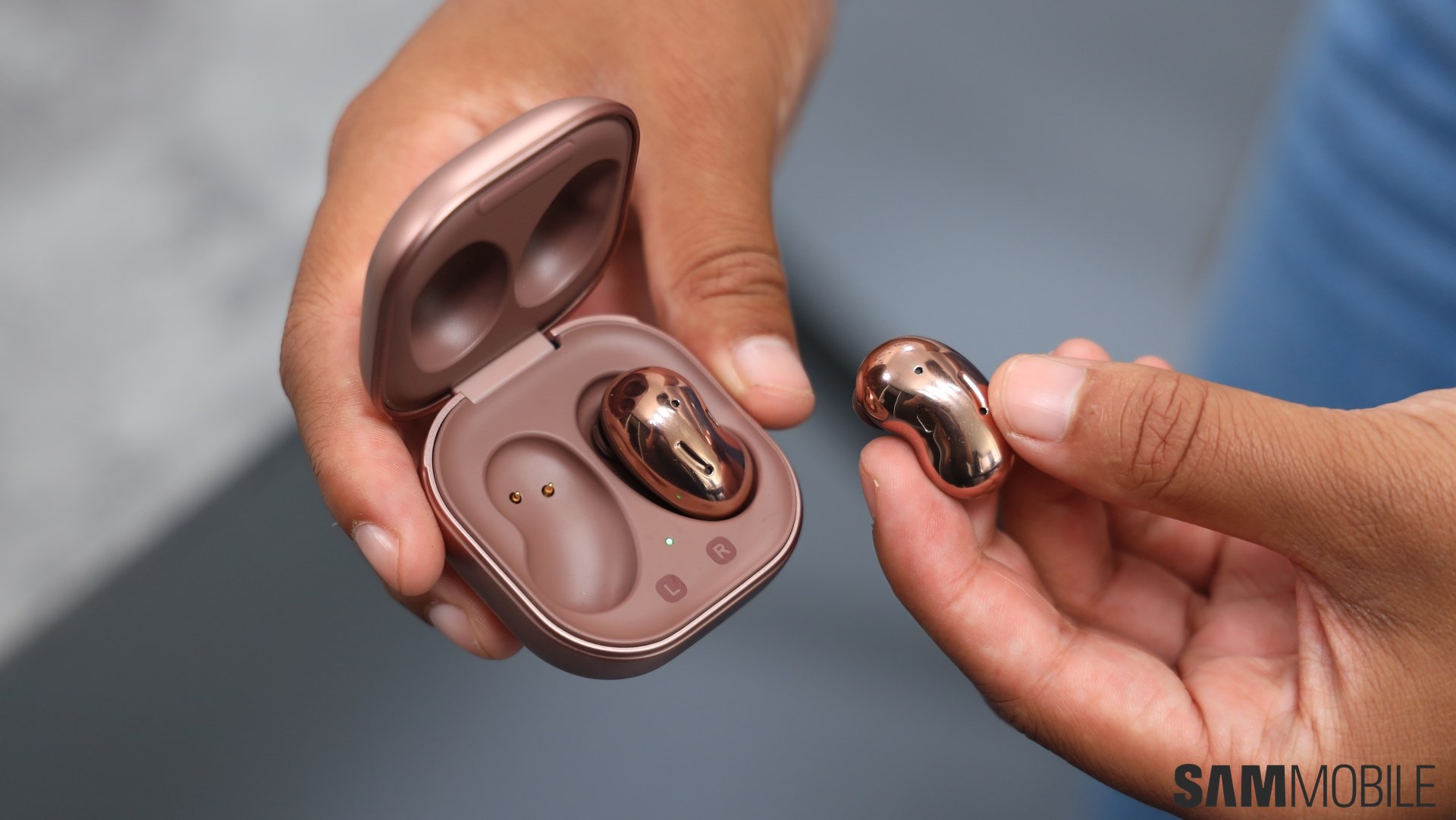 Samsung added a third microphone to the Galaxy Buds+ because customers had complained about the not-so-ideal voice call performance of its predecessor, particularly outdoors. The Galaxy Buds Live also gets some improvements in this department. It also has three microphones – one inner mic and two outer beamforming mics on either side. The mics are paired with an accelerometer, or as Samsung calls it, a Voice Pickup unit.

In our tests, we found the call quality to be quite good indoors, but not all that different from the Buds+. We did notice a slight improvement outdoors, an environment where the Buds have historically struggled in. The mix of beamforming mics, which focus their signal on where your voice is coming from, and the Voice Pickup Unit that senses the movement of the jaw and bone conduction to convert those vibrations into voice signals, are to thank for that.

As always, you can personalize the sound quality through the Galaxy Wearable app. There are equaliser presets that you can switch between. Those among our team who prefer more bass like the Bass boost preset the most. 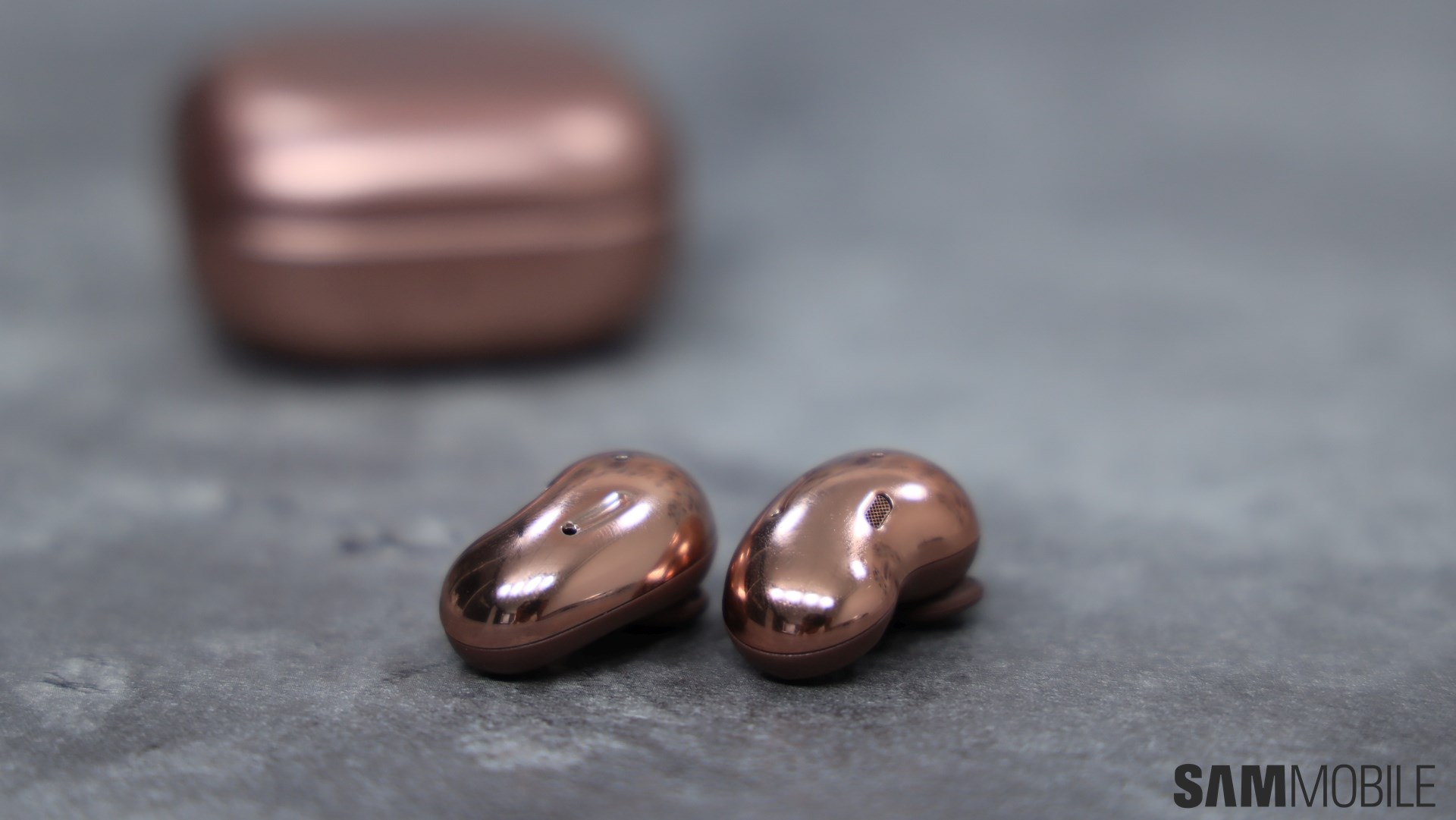 These are the first wireless earbuds from Samsung to feature Active Noise Cancellation (ANC) and that’s going to be one of the biggest selling points of this product. Samsung has developed ANC for open type earbuds like these and claims that the feature can reduce low-band background noise such as those generated by trains and buses up to 97%, while not tuning out noise above 700Hz as much. This means that you can be completely immersed in your podcast but not miss the train conductor’s announcement.

In reality, though, we felt a bit underwhelmed by this ANC implementation. While they didn’t have any sort of noise cancellation per se, the in-ear design of the Galaxy Buds/Buds+ did a good job of blocking out ambient sound. The silicone eartips basically sealed the ear canal. That’s not possible on the Galaxy Buds Live due to the very nature of their design.

ANC on the Galaxy Buds Live is only marginally better than that. We can’t say that ANC makes a major difference compared to the natural noise cancellation provided by the other earbuds. That’s largely due to the fact that these open type earbuds can’t block sound on their own. This is a consequence of the form factor, there’s only so much you can extract out of such tiny earbuds after all.

The feature’s efforts to drown out the noise was noticeable when enabling ANC in a bustling office but not substantial enough to make a difference. It made us wish even more for a future Buds+ model with ANC as we feel that would be a much better implementation. 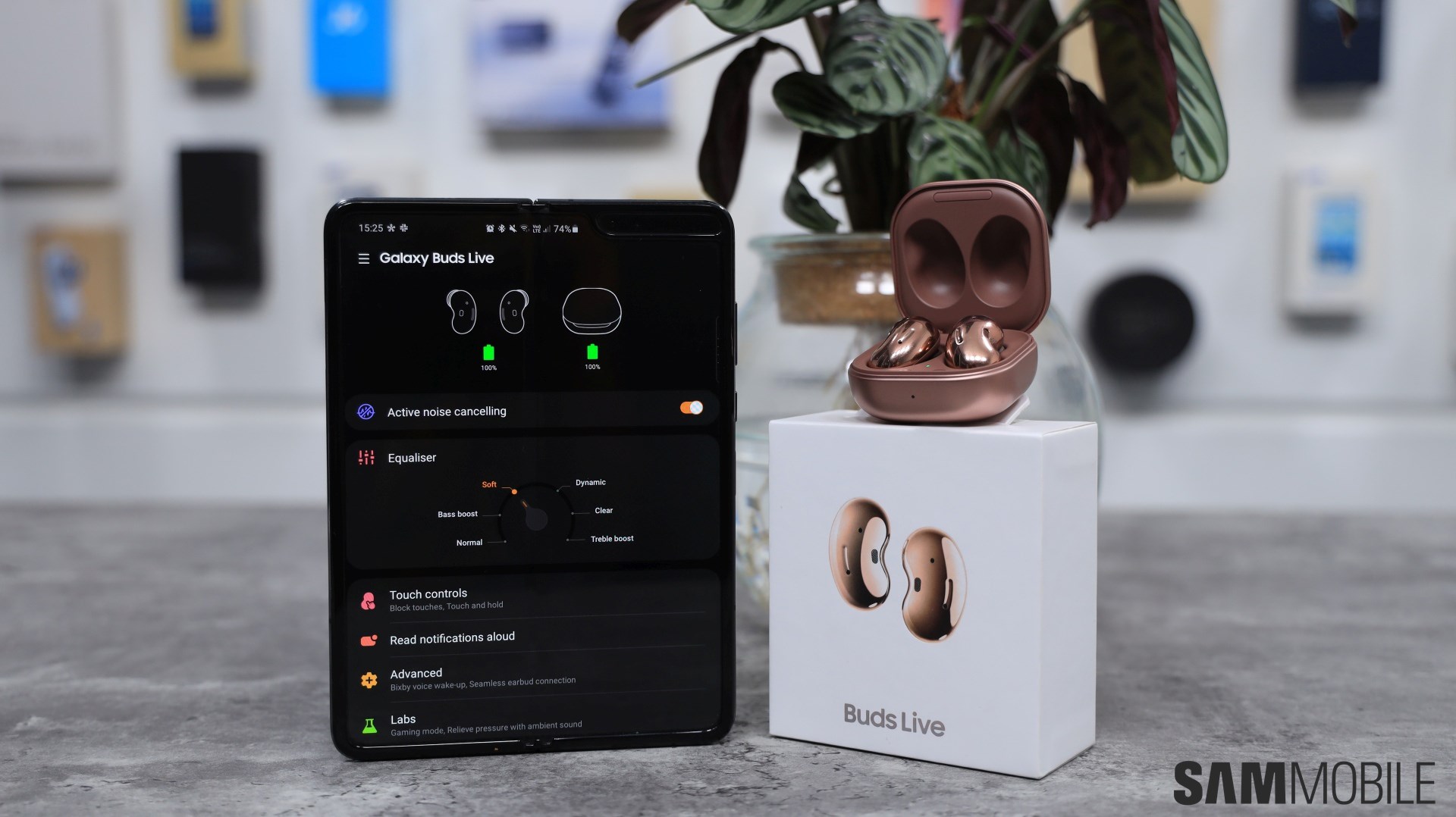 There’s added functionality like the Game Mode that can be enabled through the Galaxy Wearable app. It improves audio latency when playing games. The new Buds Together feature is particularly useful if you like to share what you’re listening to with your friends. As sanitization and minimizing contact has become our new normal, you may not feel comfortable sharing earbuds with your friend, no matter how awesome the track they want you to check out is.

Bixby voice control is obviously present. When paired with your Galaxy device, use commands like “Hi Bixby, how’s the weather today,” to get your digital assistant to respond. The new mics do help with voice pickup but the whole experience tends to be hit or miss like always. Spotify remains Samsung’s preferred music streaming service and it’s possible to control basic features for the service through the new buds. The new earbuds have slightly smaller 60mAh batteries compared to the Galaxy Buds+ but the charging case has almost double the capacity at 472mAh. That also means each earbud is slightly lighter than the Buds+ at 5.6g compared to 6.3g. The Galaxy Buds Live can give you one hour of playtime with just a 5-minute charge, great for when you have to rush out the door. Qi-certified wireless charging is also supported.

Samsung’s official figures claim up to 6 hours of play time from the earbuds with ANC enabled and Bixby voice disabled and up to 21 hours including the case. If both functions are off, the numbers jump up to 8 hours and 29 hours respectively. The claims are mostly accurate. There’s always some variance between the published figures and real-world usage but it’s not significant by any means.

We were impressed by the battery life of the Galaxy Buds Live. We’ve grown accustomed to the longevity of the Galaxy Buds+ but didn’t feel that the new buds are at any significant disadvantage. Even after using the earbuds all day and draining them, I could always get nearly an hour’s worth of play time by placing the buds in the case for 5 minutes, giving them just enough juice to last my commute home from the office. 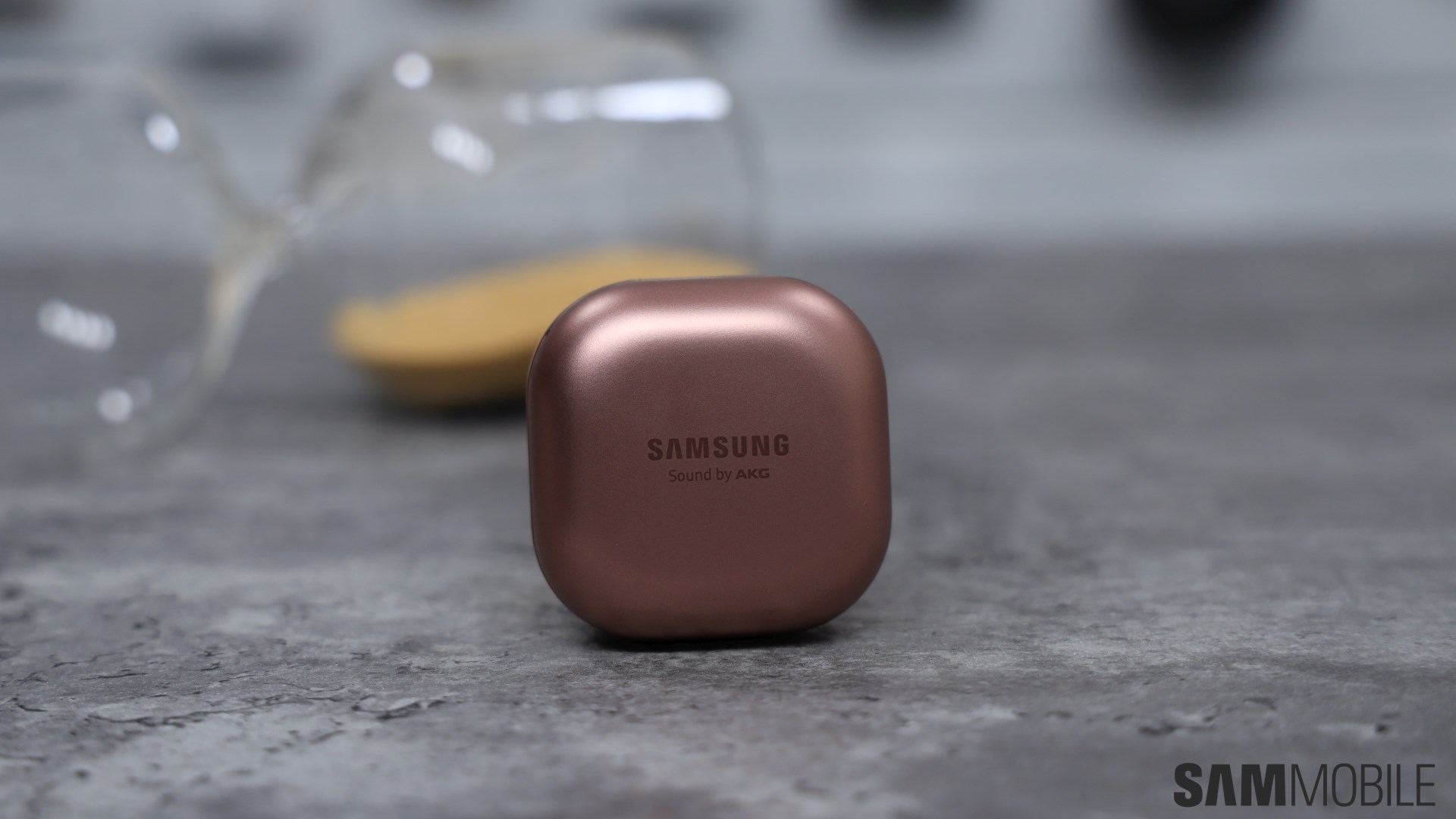 Let’s cut to the chase: Do we recommend the Galaxy Buds Live? Yes, we do. The new design significantly improves comfort and the audio experience has been elevated as well. A noticeable effort has also been made to address issues with call quality. Battery life is solid so you never have to worry about the earbuds dying on you.

These are the reasons why we feel you should buy the Galaxy Buds Live if you’re interested in them. ANC might be the big-ticket item here but on its own, it’s not enough to earn the Galaxy Buds Live a buy recommendation. It’s great that a feature that Samsung fans had long been waiting for has finally arrived but the current implementation leaves us wishing for more.

Are the Galaxy Buds Live worth it for their $169/€189 price? For the reasons mentioned above, absolutely. If you’ve also made up your mind to purchase a Galaxy Note 20 flagship, you might want to get your pre-order in as Samsung will be distributing a pair as an incentive in select markets. If you’re skipping the new flagship but have been thinking about upgrading your earbuds, go ahead and buy the Galaxy Buds Live. You won’t regret it.