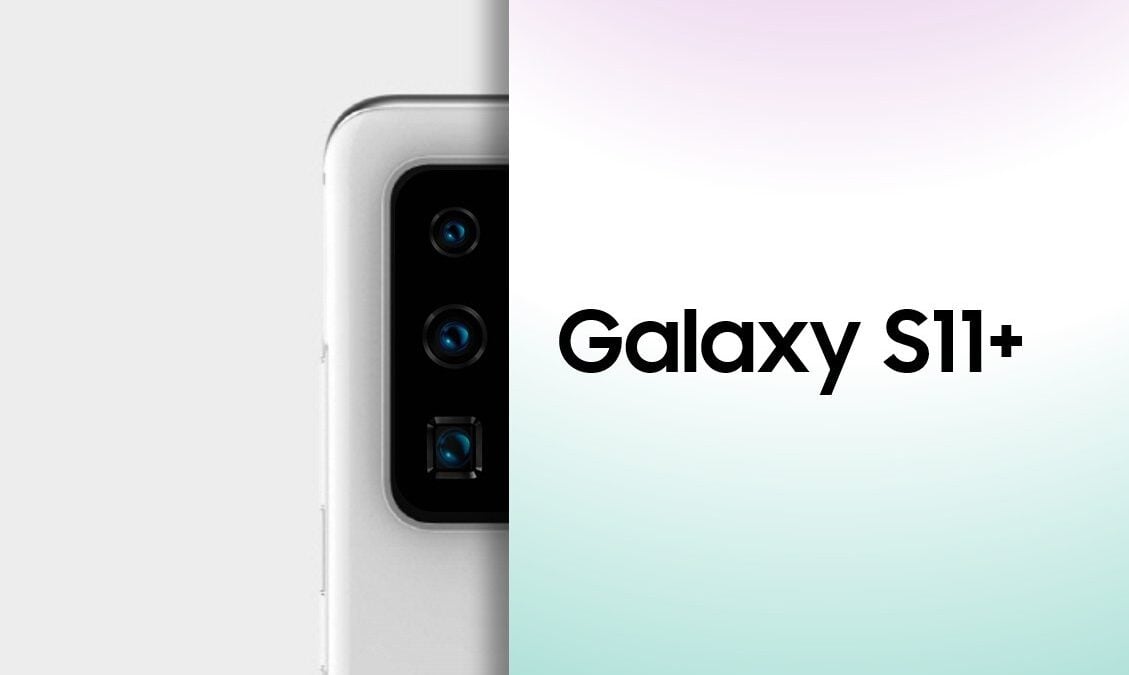 Samsung’s Galaxy S series is the default flagship lineup for many users in the Android ecosystem. While devices from other brands excel in one or two areas, Galaxy S flagships are great all-rounders with no debilitating drawbacks. Therefore, it is natural for customers to be curious about and eagerly anticipate the next Galaxy flagship.

Typically, Samsung releases its Galaxy S flagship in the first quarter of the year and a Galaxy Note device in the third quarter. If the company sticks to the same release schedule and naming scheme, we may see the Galaxy S11 in February or March of 2020. There are, however, some plausible rumors that the company may merge its Galaxy Note and S lineup next year and launch the upcoming flagship under the Galaxy One branding.

The Galaxy S11 (or whatever the next Samsung flagship smartphone is called) is reportedly codenamed Picasso. The name doesn’t reveal anything interesting, but it is in line with Samsung’s use of another famed artist Da Vinci as the codename for the Galaxy Note 10.

Let’s look at what the rumors and leaks say about what the Galaxy S11 may bring to the table. We’ll keep updating the information on this page as we approach the Galaxy S11’s launch, so don’t forget to bookmark it in your browser.

19/12/2019: The Galaxy S11’s 108MP primary rear camera could be accompanied by a 48MP 5x zoom camera, according to Twitter leakster Ice universe. And, as we exclusively revealed, 8K video recording is confirmed to be one of the features on the Galaxy S11 camera.

04/12/2019: The Galaxy S11 could come with an upgraded fingerprint sensor that has a larger recognition area and can scan two fingers at the same time. More details here.

25/11/2019: Two important specs for the Galaxy S11 5G have been confirmed thanks to the device showing up online on benchmark website Geekbench. The S11 5G will have the Exynos 990 under the hood and 12GB of RAM, according to the benchmark.

22/11/2019: A major new leak has given us our first glimpse at what the Galaxy S11 could look like. Centered punch hole, up to five rear cameras, and more can be seen in renders of the device that have surfaced online.

22/11/2019: Some rumored Galaxy S11 camera features have been confirmed thanks to trademarks Samsung was granted recently.

21/11/2019: The 5x optical zoom camera on the Galaxy S11 will have optical image stabilization, according to a patent Samsung has been granted recently.

21/11/2019: Samsung has begun work on the LTE variants of the Galaxy S11. The company had only been working on the 5G variants till now.

20/11/2019: Samsung has reportedly begun producing the Galaxy S11 batteries. The battery design is said to be similar to the Galaxy Note 10’s and should theoretically allow Samsung to increase battery capacity with a relatively minor bump in its physical size. 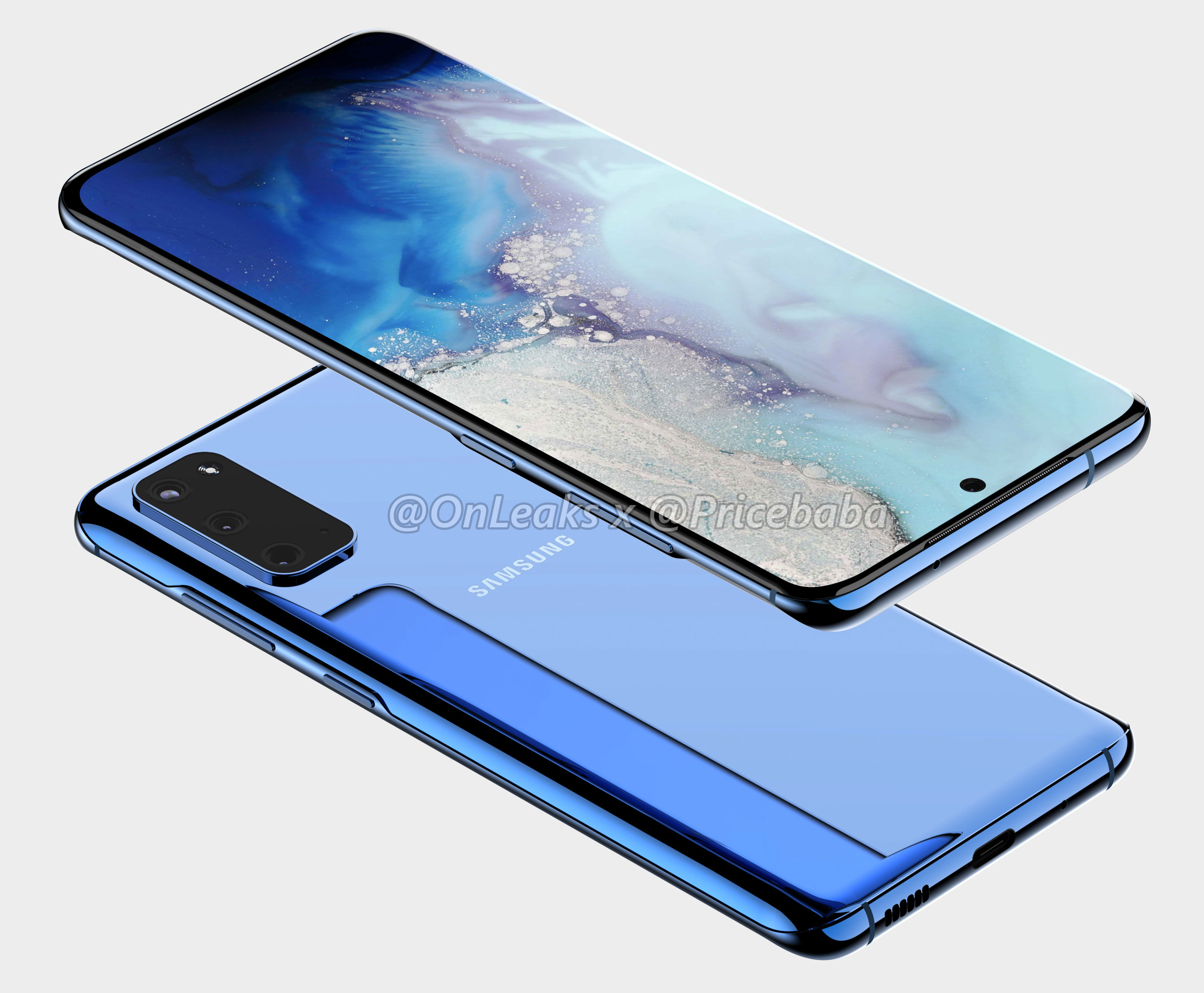 In the last couple of years, smartphone design has peaked, leaving very little room for innovation without changing the form factor. Manufacturers can no longer make easy gains in the design of their new products and are thus limited to minor improvements such as making the bezels smaller, reducing the size of the notch, hiding the front camera with a slider, etc.

There is no doubt the design of the Galaxy S11 will be facing the same challenge. It’s doubtful that Samsung’s next flagship will sport a radically different design given how far they have already pushed what is possible with the current flagship models. From whatever we have heard so far, the Galaxy S11 will look a lot like the Galaxy S10 with minor tweaks. You can expect the bezels to be smaller, placement of the front camera to be even more discreet, and possibly a redesigned camera module on the back to accommodate all the rumored new tech.

Though there is some talk of Samsung launching the Galaxy S11 with an under-display camera to eliminate the notch problem completely, it’s very unlikely as the company has already said that technology is a year or two away from commercialization. The Galaxy S11 will probably just get the Note 10’s centered punch-hole instead.

As we inch closer to the launch of the Galaxy S11, we can expect more credible and revealing leaks about the design of the device. Until then, we are left with nothing more than guesswork and unsubstantiated rumors.

Samsung has already pushed its flagships to limits, and there is little other than incremental upgrades it can add to the Galaxy S11. From all the leaks so far and considering the Android landscape, it’s fair to say that the Galaxy S11’s biggest focus will be on the camera.

The Galaxy S11 will most probably be powered by the Exynos 9830 SoC. Of course, in a handful of markets, it will feature the latest Snapdragon chipset, which in this case could be the Snapdragon 865. SamMobile can exclusively confirm that the Galaxy S11 lineup will come (not all the models but cumulatively) in four storage options: 128GB, 256GB, 512GB, and 1TB. There is currently no information about the microSD card situation on the Galaxy S11, but it will most probably skip the headphone jack.

We can also expect the 45W fast charging introduced with the Galaxy Note 10+ to be a standard feature across the Galaxy S11 lineup. Similarly, expect all the Galaxy S11 models to offer 5G connectivity as opposed to a completely separate 5G variant like the Galaxy S10 5G. 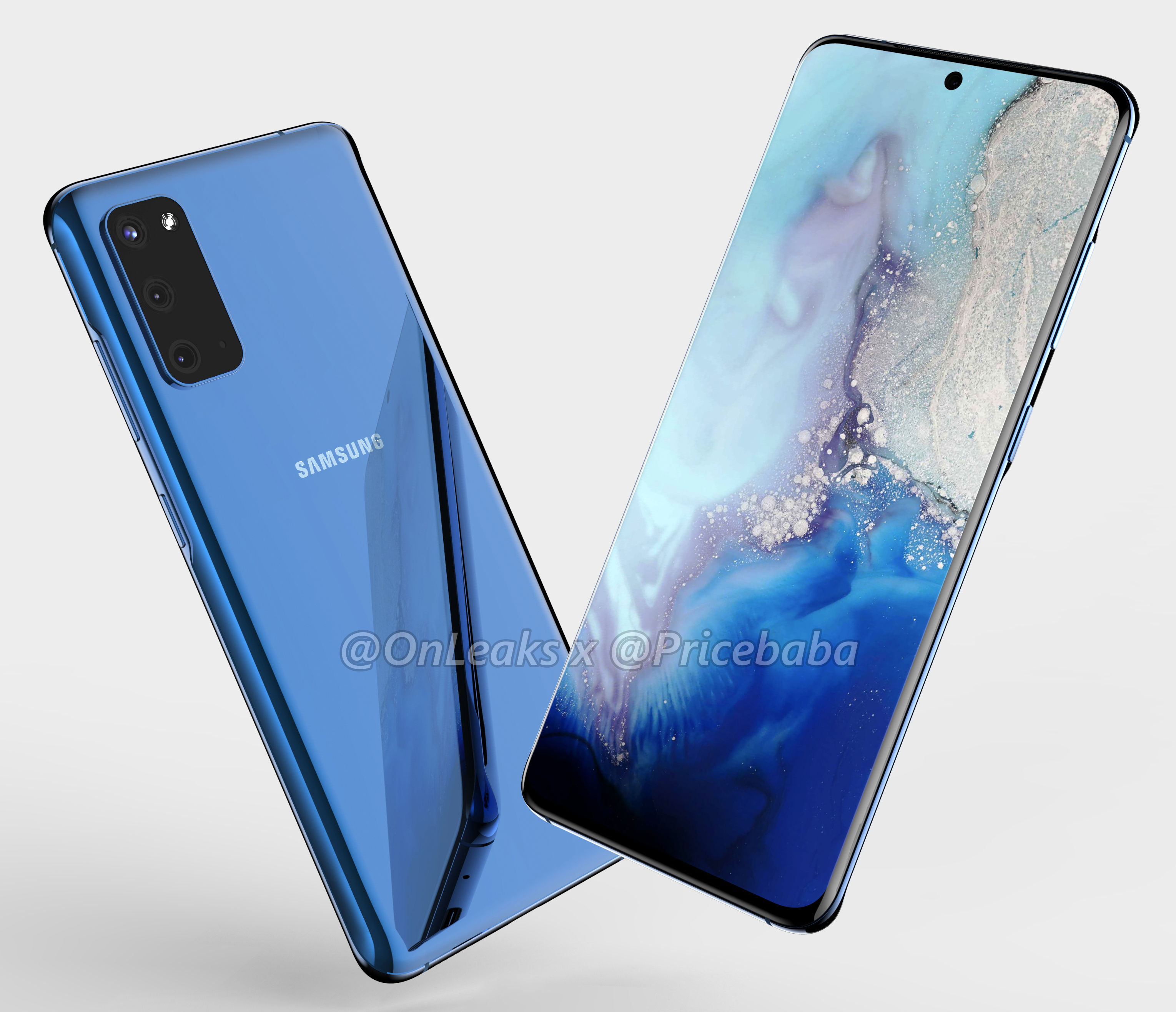 Samsung flagships always come with top-notch displays, and the Galaxy S11 will be no different. So far, we haven’t come across any significant or credible leaks regarding the screen on the next Galaxy flagship, but it is safe to say it will be an incremental upgrade over its predecessors.

A browser benchmark revealed that the Galaxy S11 would sport a taller 20:9 display as opposed to the 19:9 screens on the company’s 2019 top-end offerings. This points to even smaller bezels and possibly a marginal increase in the screen size of the upcoming flagship. Samsung already has a couple of mid-range devices such as the Galaxy A70 and the A80 with this display ratio.

Curved screens have been the hallmark of most Galaxy flagship devices. They help Samsung differentiate its devices from dozens of rivals in the market, so expect the company to continue with them. Also, given the growing popularity of displays with high-refresh rates and that Samsung is the supplier for some of these panels, there is a real chance that the Galaxy S11 might pack a 90Hz or a 120Hz display to match rivals in the market. 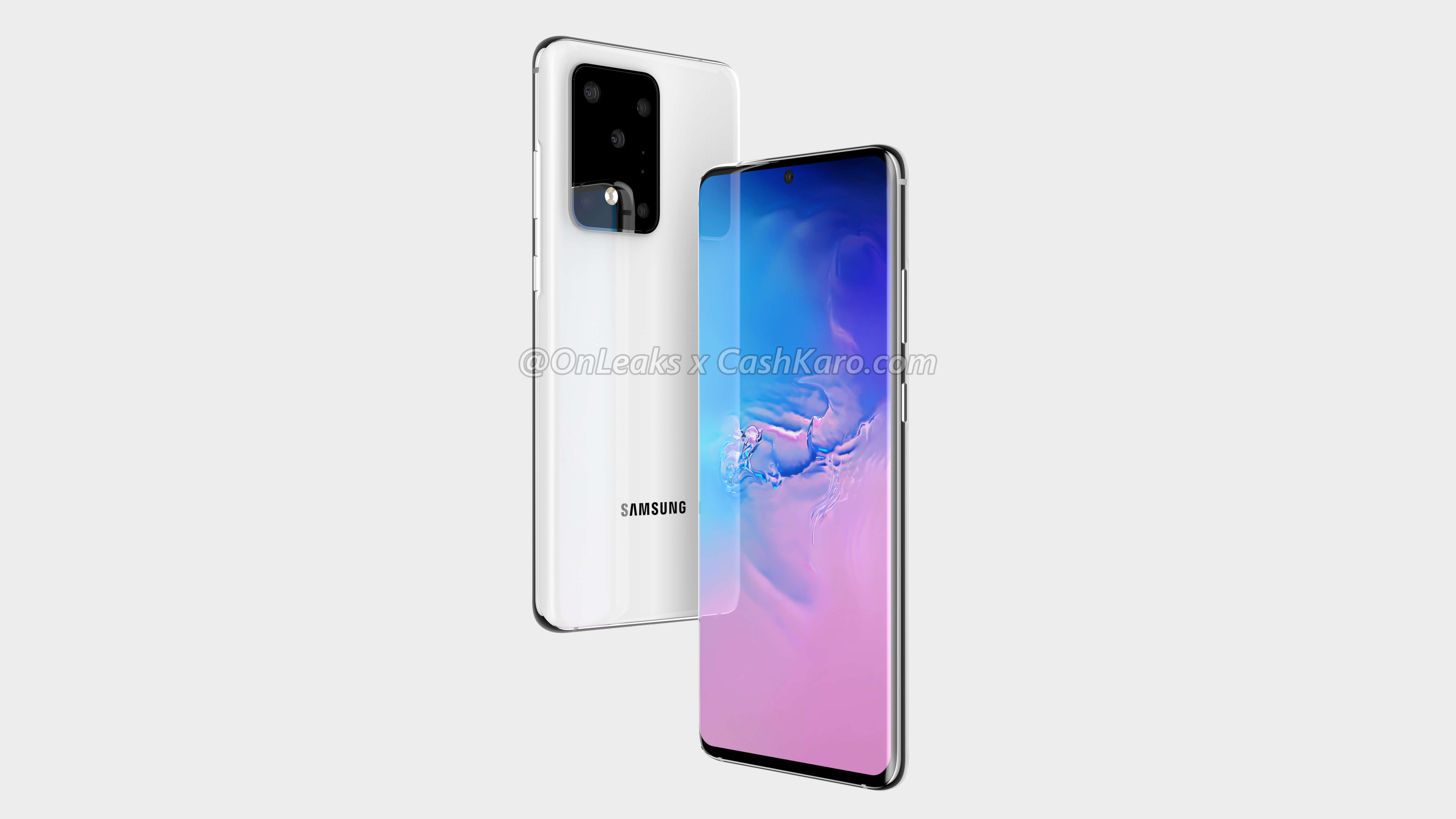 A recent report said the Galaxy S11 will be equipped with a 108MP primary camera (possibly the ISOCELL Bright HMX sensor) and supports 5x optical zoom. Later, a separate report mentioned that the camera on the Galaxy S11 is codenamed Hubble (referring to the Hubble telescope), which is a strong indication that the S11 might indeed feature some impressive optical zoom capabilities.

The company will reportedly use a ‘periscope system’ that allows the camera module to sit flush with the body of the smartphone. Under this arrangement, the sensor and lenses are placed sideways and utilize the principle of reflecting light in a telescope.

We currently don’t know how many cameras each of the Galaxy S11 models will sport on the front and the back. 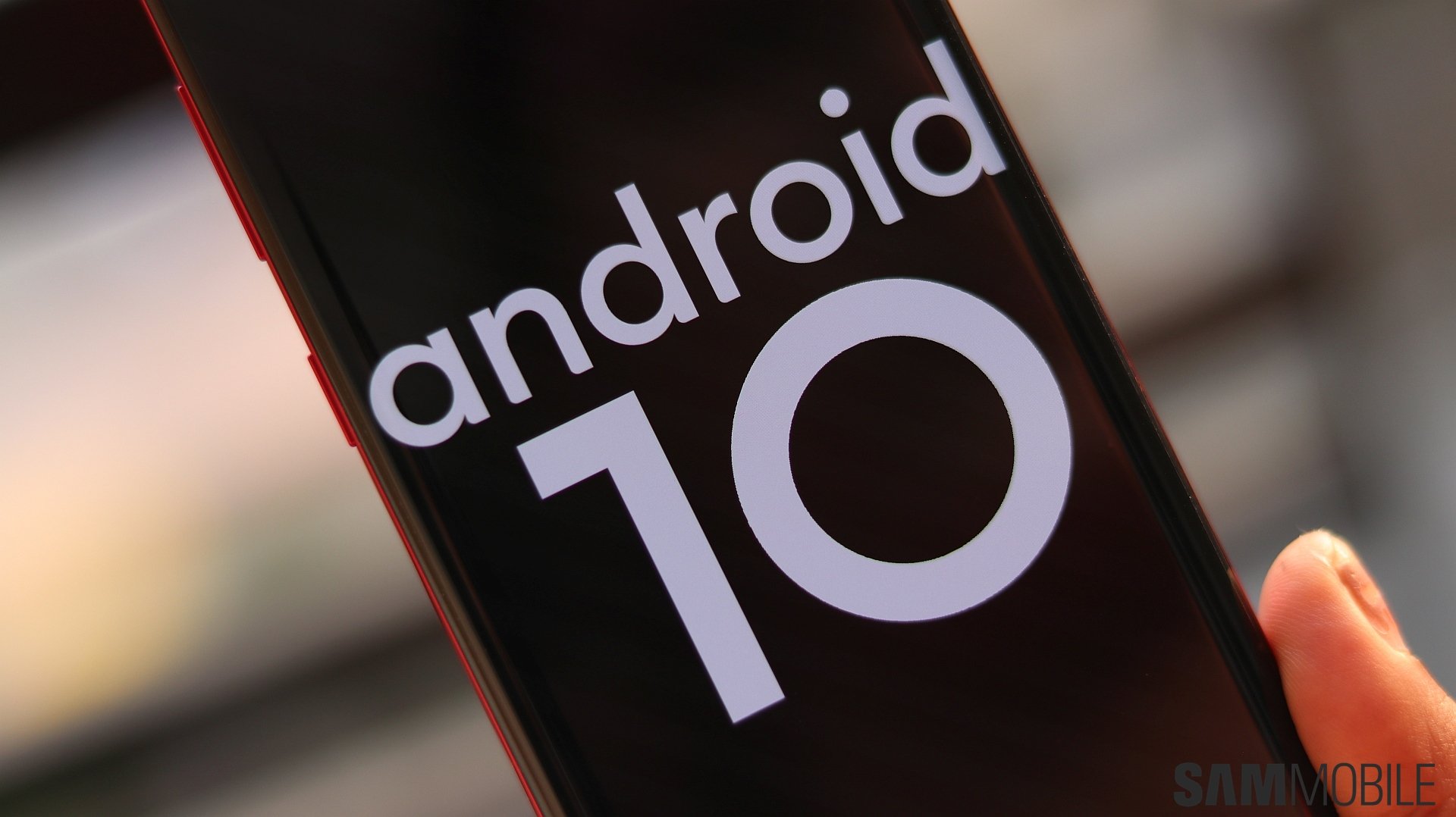 The Galaxy S11 will run Android 10 out of the box, and as we reported exclusively, it will come with One UI 2.1 on top. We don’t know yet what new software features Samsung will pack into the Galaxy S11, but wireless DeX mode seems to be a good guess. Earlier this year, Samsung confirmed they are exploring this option without committing to any launch date.

If the rumors pan out, the camera will be the main focus of the Galaxy S11, and that means more camera-centric software features. In fact, Samsung has done this for nearly all of its recent flagship devices. For the Galaxy S11, the company could be working on introducing features like 8K video recording, a Hyperlapse mode for low-light conditions, and more.

Samsung will hold the Galaxy S11 Unpacked event in the third week of February according to our sources, which is in line with what the company did for the Galaxy S10 launch. If the device announcement happens in late February, you can expect Galaxy S11 to hit the market in early to mid-March.

Finally, unlike the Galaxy S10 series where there was a separate 5G model, expect 5G connectivity across the lineup. While not many buyers will be able to benefit immediately from the inclusion of 5G, it will help Samsung to convince customers that the Galaxy S11 lineup is not missing any key features that rivals are offering in their smartphones. The company may even ditch the 4G models in some markets and sell only the 5G variants.