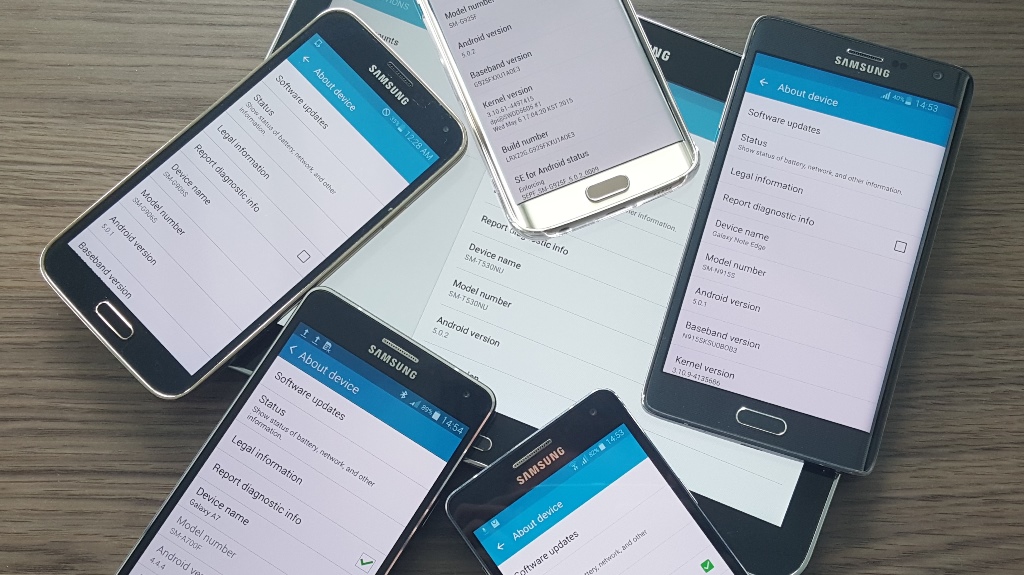 It has become something of a hobby for many in smartphone land: bemoan Samsung’s unreliable update policy. Many of our visitors come to do just that, and we play the game ourselves from time to time. However, as controversial as it may sound, slowly but surely hell is freezing over, at least in some markets. Samsung is getting better with regard to software updates. Though perfection is a long way away, bear with us as we examine recent developments.

It has now been over two years since Samsung announced it would simplify its smartphone portfolio, and by and large, this is exactly what has happened, at least in some markets. For example, in Europe the Galaxy lineup has become fairly simple: the Galaxy J series covers the low end of the market, the Galaxy A series is the mid-range, and the S series are Samsung’s sole high-end offering since the demise of the Note 7.

Now, we know things aren’t as clear-cut elsewhere, especially not since Samsung started to muddle things up in a big way this year with the launch of too many different Prime and Pro variations of the On and J series phones, primarily in Asian markets. But for the purpose of this treatise, we’ll focus first on markets where things have indeed become simpler.

In 2015, Samsung launched the first-generation Galaxy A3, A5, and A7. At that time, they were running Android 4.4 KitKat. Later that year, they were updated to Android 5.0 Lollipop, and this year saw them – and the A8 – receive Android 6.0.1 Marshmallow. The second generation of these devices was launched on Lollipop, recently came over to Marshmallow, and will get an update to Android 7.0 Nougat next year, as we recently confirmed. This is Samsung’s mid-range getting two full-blown Android updates, just as the high-end flagships get.

Of course, in between these big updates, there are the security patches. The first generation A series get them a few times a year, while popular devices launched in 2016 receive them pretty much on a monthly basis. But what is more is that security updates now keep coming long after the last significant Android update has finished rolling out.

In 2016, for example, Samsung has provided security patches for the Galaxy S4. This three-and-a-half-year-old device is still being kept up-to-date, security-wise. And before you complain that up-to-date does not include an update to an Android version higher than Lollipop, keep in mind that newer software does not equate to an improved user experience. We have an actual first-generation iPad Mini lying around here, which received iOS updates until recently, rendering it near-useless. Our Galaxy S4 hasn’t suffered as much and is still very usable (despite coming out only a few months after that iPad). But that is, in fact, besides the point.

It seems that, for the core of its device portfolio, Samsung is not only providing two full Android updates but rolling out security updates long past that point – at least for devices in its mid-range portfolio and higher. In 2017 we will learn if the same applies to its Galaxy J lineup (minus all dirt-cheap Galaxy J1 and J2 variants). The first generation Galaxy J5 received its portion of Marshmallow last summer and autumn, while also receiving security patches regularly, even if not monthly. The newer J5 (2016) and J7 (2016) have yet to get a big Android update, as they are currently on Marshmallow, but they too have been getting regular security fixes in recent months.

So, a Galaxy older than three-and-a-half years still getting security patches, mid-range devices getting multiple full Android updates, and even parts of the low-end being kept neatly up-to-date are all signs that Samsung is putting genuine effort into improving its overall update effort. Though this development will surely have been stimulated by legal proceedings targeting exactly this topic, the improvements cannot be denied.

However, as we pointed out earlier, things are not that simple. There are still plenty of spin-off devices on the market that do not keep up properly. For example, while the original Galaxy S5 is still getting security patches on a monthly basis, the Galaxy S5 Neo, which is about half as old, is already lagging in this respect. And while the Galaxy S5 Mini will eventually be getting its dose of Marshmallow, Samsung is doing so in an inexplicably slow fashion.

If only the problem were confined to spin-off models (Mini’s, Neo’s, Value Editions, etc.) that will eventually disappear from the market, all Samsung would have to do is sit out the coming year, and it would be left with a set of neatly up-to-date Galaxy devices, and a policy to keep things secure.

Still, Samsung is Samsung, and the clear-structured portfolio described above has once more gotten muddled in some markets. Despite the company so far refraining from releasing any S6 spin-offs (there’s no S6 Mini, Neo or Value Edition), things have gotten seriously complicated in the low-end portfolio in many Asian countries. Not only is there the additional On series, but the chaotic addition of 2016-generation devices, Pro variants and Prime editions has quickly made a mess of what seemed to be a portfolio on its way of being cleaned up. It is too early to tell, but this does not bode well for the future updates of at least the cheapest of these devices.

Overall, however, there are reasons to be optimistic about Samsung’s improving ability to keep Galaxy devices updated and secure, even if this primarily applies to its portfolio’s mid-range and high-end sections. A solid two-year period of Android updates and an even longer period of regular security patches seem to be where the company is headed.

In the lower realm of the Galaxy, however, things look less rosy. While some devices might get at least one big Android update, it remains to be seen how well each single device variant will be kept safe through security patches. Some of those devices are dirt-cheap, but not all are.

Leaving you with a short conclusion, we can recap saying there’s cause for both concern and optimism, but the fact that any analysis of Samsung’s update policy leaves room for optimism (next to criticism) is an improvement worth noting.