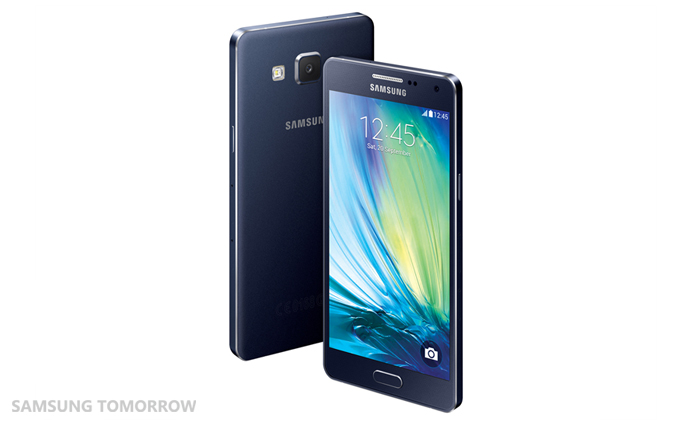 Leaks and rumors about the Galaxy A3, Galaxy A5, and the Galaxy A7 had reached almost fever pitch in recent days, and now, Samsung has announced two of the three A series devices. The Galaxy A3 and Galaxy A5 are now official, and as we had exclusively leaked months ago, feature a full-metal unibody design. The two are also the slimmest Samsung devices after the Galaxy Alpha, with the A3 6.9mm thick and the A5 coming in at 6.7mm, which is as thin as the Alpha. Samsung is targeting young consumers with the Galaxy A3 and A5, with a focus on social networking.

The focus on social networking seems to stem from the 5-megapixel front-facing cameras on both the A3 and A5, which Samsung says will “offer a superior mobile and social experience to young consumers who want to express their unique style while constantly staying connected.” Both devices come with the latest camera software, with features like Wide Selfie, Palm Selfie, Rear Cam Selfie, and Beauty Face, which debuted on the Galaxy Note 4. Samsung has also thrown in LTE connectivity, another feature we had revealed would be present on the entire Galaxy A lineup.

Both devices will feature an NFC chip on the LTE variants, and will run on Android 4.4 KitKat out of the box. Samsung has included features like Ultra Power Saving Mode, and an option to change between four themes, a first for an Android device from Samsung and one we hope makes it to the company’s other smartphones.

Samsung hasn’t offered any details on pricing, but consumers will be able to buy the Galaxy A3 and Galaxy A5 in November in a multitude of colors, including Pearl White, Midnight Black, Platinum Silver, Soft Pink, Light Blue and Champagne Gold. Unfortunately, it looks like the phones will launch in only select markets, at least early on, though once again we’re in the dark about exactly what regions will be lucky enough to see the two devices go on sale.

With the Galaxy A3 and Galaxy A5, Samsung seems well-poised to take back some of the mid-range market it has lost over the last few months. It’s not everyday we see full-metal designs on devices that aren’t meant to be flagships, though pricing will still remain a key factor that will decide whether the Galaxy A3 and A5 can contribute in turning things around for the Korean manufacturer and its falling revenues and profits.

Samsung Electronics’ Ultra Slim Galaxy A5 and Galaxy A3

Seoul, Korea – October 31, 2014 – Samsung Electronics Co., Ltd. today unveiled the Galaxy A5 and Galaxy A3, offering a refined, trendy design and the most advanced functions to support social networking. Available in a variety of colors and sizes, both devices empower younger consumers to quickly and easily capture meaningful moments, connect to social media and share their daily lives.

“The Galaxy A5 and A3 offer a beautifully crafted full metal unibody, slim design, superior hardware and the best possible social media experience,” said JK Shin, CEO and Head of IT & Mobile Communication at Samsung Electronics. “These devices make our advanced Galaxy experience even more accessible to young and trend conscious consumers.”

The Galaxy A5 and A3 are Samsung’s slimmest smartphones to date, featuring refined full metal unibody designs that are 6.7mm and 6.9mm thin, respectively. Both devices will come in a variety of colors, including Pearl White,Midnight Black, Platinum Silver, Soft Pink, Light Blue and Champagne Gold, to accommodate the personal style and preference of diverse users.

The Galaxy A5 and A3 offer a superior mobile and social experience to young consumers who want to express their unique style while constantly staying connected. Sporting an advanced 5MP front-facing camera, taking vivid selfies is now easier than ever before. Innovative photo-taking features, such as Wide Selfie, Palm Selfie, Animated GIF, Beauty Face Features, and Rear-cam Selfie, let users capture attractive selfies in high resolution by automatically detecting and focusing on a person’s face. Users are also able to quickly and easily share photos or videos on their favorite social media channels with the device’s fast network speed of LTE Category 4 standard.

The Galaxy A5 and A3 are ideal for young consumers seeking practicality and functionality. Both devices are equipped with an extraordinary Super AMOLED display and Adaptive Display technology to deliver clearer images with deep contrast and better viewing angles for more vivid, colorful content in virtually any environment, even under bright sunlight. The Galaxy A5 and A3 are also outfitted with a Quad Core 1.2 GHz processor for seamless multi-tasking and faster browsing experience. In addition, the Galaxy A5 and A3 include popular features exclusive to Galaxy devices, such as Ultra-Power Saving Mode, Private Mode and Multiscreen, as well as adjustable audio which intelligently adapts and enhances sound output based on the user’s surrounding environment.

The Galaxy A5 and A3 will be available in select markets starting in November 2014.