Samsung’s ambitions to create a new device category came to fruition earlier this year when it released the Galaxy Fold. It’s not a perfect device, but it is one of a kind even among flexible devices. It is the beginning of a new legacy.

Samsung is now working on its second foldable phone. It doesn’t have an official name yet but most people have silently agreed on calling it the Galaxy Fold 2 for the sake of continuity.

However, even as the so-called Galaxy Fold 2 boasts a flexible display much like the original model does, it will be very different from the ongoing Galaxy Fold in nearly every other aspect. For starters, it’s expected to have a clamshell form factor which was all but confirmed by Samsung a couple of months ago at IFA.

It’s also expected to have a much lower price tag compared to the original smartphone-tablet hybrid, mostly because it’s poised to have less powerful – and even fewer – components.

Today, we’ll wrap up all of the information we have on the Galaxy Fold 2 as of this writing, so let’s have a closer look at what we can expect from this model. Bear in mind that none of these details are officially confirmed and there’s always a chance that the real product will be different.

13/1/2020: A new report suggests that Samsung’s clamshell foldable phone won’t be called the Galaxy Fold 2 or Galaxy Bloom, but that it will hit the shelves as the Galaxy Z Flip. Meanwhile, a separate report indicates that the device might be limited to 15W fast charging with no plans to implement 25W super-fast charging.

14/1/2020: The Galaxy Z Flip has been certified by China’s regulatory agency 3C. The online documents lend more credibility to the rumors claiming that the device will be limited to 15W fast charging.

15/1/2020: Samsung may have developed a new flexible display for the Galaxy Z Flip. It’s supposedly made of ultra-thin glass and has an additional protective layer made of plastic. It should be more resilient and easy to repair. The phone is powered by a battery with a combined capacity of 3,300mAh, the rumor claims.

15/1/2020: In other news, new  – unofficial – 3D renders have surfaced. They may offer a closer look at the Galaxy Z Flip’s final, market-ready design.

17/1/2020: Samsung will reportedly offer only one case design for the Galaxy Z Flip. It’s a genuine leather cover available in black or white for the price of around $100.

20/1/2020: The Galaxy Z Flip will reportedly be offered in exclusive colors by South Korean mobile carriers.

20/1/2020: In other news, a supposed promo image for the Galaxy Z Flip has leaked, potentially confusing some people about the phone’s design.

22/1/2020: Yet another rumor indicates that the clamshell foldable could cost more than expected; or the equivalent of around $1,375.

23/1/2020: After some back and forth regarding the foldable phone’s official moniker, a regulatory body has reconfirmed that Samsung’s clamshell device will be called the ‘Galaxy Z Flip.’

24/1/2020: New reports suggest that the Galaxy Z Flip could have a crease on its foldable screen. In addition, it might have a side-mounted fingerprint scanner as opposed to embedding one in its display.

28/1/2020: We exclusively reveal that Samsung’s upcoming clamshell might be launched in a variety of color options including gold, black, purple, silver, the latter of which will have a ‘football-like’ pattern.

28/1/2020: The Galaxy Z Flip has been leaked in a handful of high-quality renders. These renders also reveal that the clamshell device has a couple of small bumpers on the lower screen bezel for additional protection.

30/1/2020: The foldable clamshell has now been tipped to feature stereo speakers, 12W wireless charging, and more.

2/2/2020: The Galaxy Z Flip has been featured in a first early hands-on video, and it both looks and sounds nice indeed!

3/2/2020: Samsung’s upcoming clamshell smartphone has been spotted online in Geekbench running a Snapdragon 855 SoC and 8GB of RAM.

5/2/2020: Support pages for the Galaxy Z Flip’s Leather Back Cover have been prematurely published by Samsung Romania.

8/2/2020: A new live photo with the device has emerged, giving a closer look at the flexible display crease. Meanwhile, new case renders have emerged as well, and so has a new hands-on video.

10/2/2020: Samsung has teased the Galaxy Z Flip in a 30-seconds ad shown during the Academy Awards (Oscars) 2020 broadcast. Meanwhile, reports claim that Samsung is gearing up to sell 2.5 million Galaxy Z Flip units.

10/2/2020: It didn’t take long for the Galaxy Z Flip Thom Browne Edition to show up in leaked material. A leaked TV ad has been published on YouTube, revealing the special edition’s color scheme and retail box contents.

As mentioned previously, the Galaxy Fold 2 will have a clamshell design harking back to the popular form factor of the 2000s. In other words, the phone will unfold vertically as opposed to flipping open like a book.

Judging by the recently-leaked live photos showcasing the alleged Galaxy Fold 2, the phone will have a flexible primary screen with an Infinity-O cutout, surrounded by fairly thick bezels that make the whole device look a bit cheap.

Unlike the Galaxy Fold, the clamshell sequel has a very small cover display design to show key bits of information such as the time of day and notifications. A dual-camera setup resides right next to the small screen.

Samsung appears to use the same hinge design employed by the original model but it’s unclear if any aspects were changed to favor durability. The hinge seems to share its color with the rest of the case, and the phone could launch in black, white, and purple.

All in all, the Galaxy Fold 2 aims to be a compact phone that can unfold to become twice as large. It doesn’t quite follow the same philosophy as the original model, which was more focused on combining the phone and tablet form factors into a single device.

The Galaxy Fold 2’s internal flexible screen is expected to measure anywhere between 6.7 and 6.9 inches. The exact pixel count is unknown, but the aspect ratio appears to be taller than usual.

Samsung is making efforts in eliminating the durability concerns marring the original Galaxy Fold, and the company is said to be working on a more resilient flexible screen protector based on ultra-thin tempered glass rather than polyimide.

However, it’s unclear whether these newer technologies will debut with the clamshell Galaxy Fold 2 or the actual direct sequel to the original Fold, which is said to be planned for release in the second half of 2020.

As for the cover display, there’s simply not a lot of information to go by, but it’s clear that this element is not going to be the main selling point, as you can tell from the image above. It’s bound to have some practical uses and possibly even notification animations, but it’s nothing to write home about.

Cameras and other specifications

There’s little information available right now about the full specs of this device. However, by now it should be obvious that the clamshell Galaxy Fold 2 has very little in common with the original model. The camera setup is just another area that couldn’t be more different from one device to the other.

While the Galaxy Fold comes with no fewer than 6 cameras, the clamshell Galaxy Fold 2 seems to be equipped with only three shooters, one of which is a selfie camera embedded in the Infinity-O display cutout. The other two rear-facing sensors seem rather underwhelming, particularly because most of Samsung’s smartphones now have at least two main cameras. The Galaxy Fold 2 simply makes do with just a couple of sensors, which means that it should be missing either a telephoto or ultra-wide lens.

The exact specifications for these sensors are unknown, but one could have a 108MP resolution, while the other could be a telephoto unit providing 5x optical zoom, leaving the ultra-wide sensor out of the equation.

We’re also fairly confident that the Galaxy Fold 2 will have a secondary 900mAh battery (shown in the image below) residing in one of its halves. It will likely be used to power the small cover display, while a larger secondary battery should power the more demanding flexible panel and other internal components. 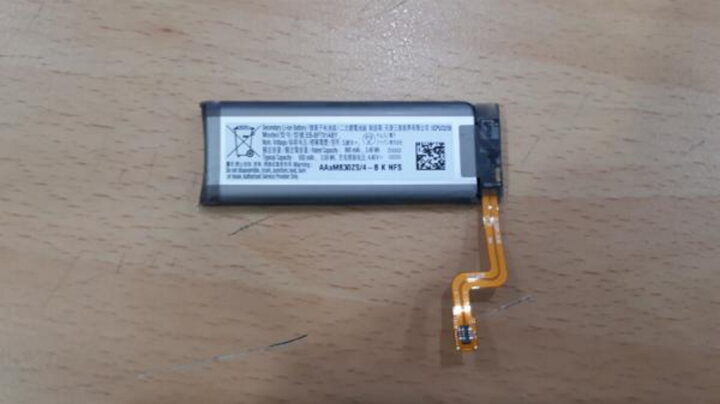 Other specs remain unknown, but assuming that the information we have right now is correct then it would be fair to say that Samsung is cutting some corners. The Motorola Razr with which the clamshell Galaxy Fold 2 will likely compete is underwhelming in terms of raw specifications, and Samsung’s alternative could be similar in this respect.

The clamshell Galaxy Fold 2 throws App Continuity right out the window. Samsung’s custom software designed to seamlessly transition apps from the cover display to the larger flexible panel and vice-versa is no longer required by the clamshell design as the cover display isn’t capable of running apps.

Judging by what we know so far, there’s little in terms of custom software that the clamshell Galaxy Fold 2 will deliver. There’s simply no need for anything too fancy, and One UI 2.0 coupled with Android 10 should be enough to offer a complete experience. The clamshell form factor will present a different software challenge to Samsung, in that how apps would resize when the device is half-folded and if additional functionality can be enabled in that position.

As to when we can expect the clamshell Galaxy Fold 2 to be released, the first half of 2020 is a fairly good bet. The device is rumored to make an appearance at the Galaxy S11 launch event likely taking place on February 18. It could hit the market for around $850-$1,000 which would put it in an odd position.

What’s your take on the clamshell Galaxy Fold 2 based on the existing rumors and leaks? Is this going to be your first – or maybe even second – foldable device? Are you ready to make the jump to this new form factor? Do you think Samsung is approaching this segment the right way with a less-expensive model, or should the company keep honing the luxurious Galaxy Fold formula until manufacturing prices go down with the passage of time? Join us in the comment section below and share your thoughts.