The Galaxy Fold was a heavily guarded secret until the day Samsung decided to show a glimpse of it to the world, and if the company had something similar planned for its second foldable smartphone, well, it’s not going to be very happy today. A leak from the Chinese website Weibo has revealed live images of the Galaxy Fold 2, Samsung’s clamshell foldable phone that it is going to release alongside the Galaxy S11 next year.

There’s a lot to talk about here. First, it seems the Galaxy Fold 2 will have the same hinge mechanism as the Galaxy Fold – you can see the caps covering the gap between the two folding halves in the pictures. Secondly, while the device has an Infinity-O display like the Galaxy Note 10, those bezels are rather huge and make the phone look quite outdated. Naturally, the outer display is pretty small, although it’s unclear what the cover display’s actual size will be (the internal display is rumored to be between 6.7 to 6.9 inches). 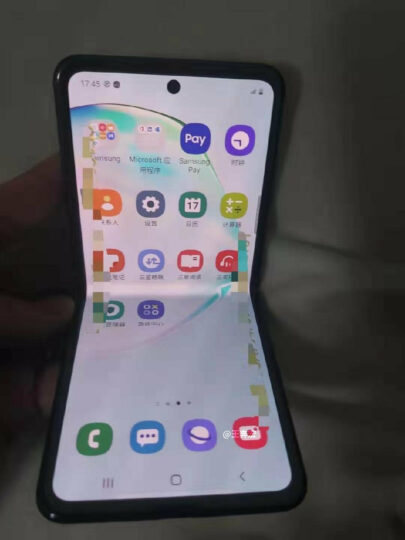 Also interesting is that there are only two rear cameras. Even Samsung’s cheap budget phones have triple camera setups these days, so it looks like rumors about the Fold 2 costing around $850-$1000 might be accurate. A recent report said the Galaxy Fold 2 will have the 108MP and 5x zoom cameras from the Galaxy S11, and if that is the case, then it seems the company’s next foldable will not offer an ultra-wide camera.

And we also wonder just how big a battery the Galaxy Fold 2 will have. One of its two batteries will have a capacity of around 900 mAh – the Galaxy Fold’s battery is divided into two halves of the same capacity, and that may end up being the case on the Fold 2 as well judging by the size of the device. We’re assuming the vertically folding form factor doesn’t leave a lot of space for high-end components or large batteries, which might be why Motorola’s new Razr also has rather outdated specs.

It’s possible the device seen in these images is a prototype and not the final product, but it gives us a good idea of what to expect from Samsung’s next foldable phone. Where the Galaxy Fold offers a premium design with a large screen and flagship specs, the Fold 2 may just be all about the cool factor with little practical utility.