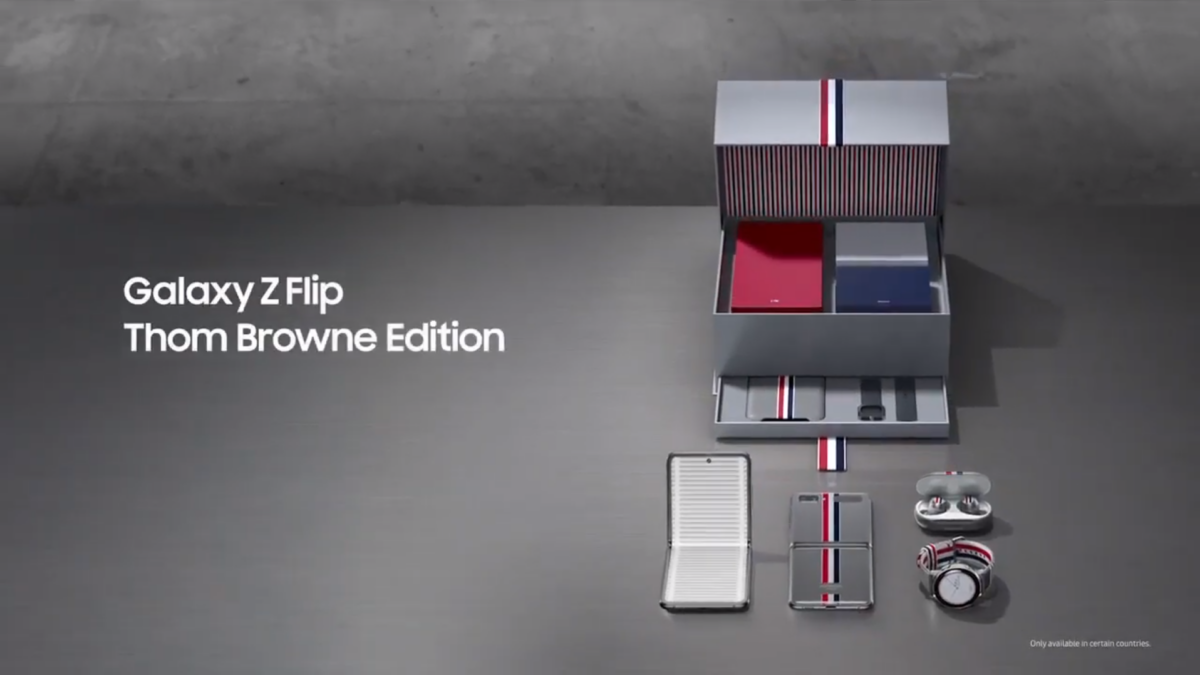 As we’ve learned over the weekend, Samsung is collaborating with fashion designer Thom Browne to create a limited-edition Galaxy Z Flip. It’s not going to be any different than the standard variant in terms of hardware specs, but it will boast unique design elements for prospective buyers who might feel like owning a foldable device is not exclusivity enough.

The key design changes between the standard and Thom Browne edition were unknown up until recently, but we don’t have to wait any longer before we can take a closer look at how Thom Browne’s limited run and the standard foldable differ.

We’ve pulled the image gallery above from a leaked Galaxy Z Flip Thom Browne Edition TV ad that has popped up on YouTube ahead of the phone’s official unveiling (below). The handset has a unique color scheme featuring Thom Browne’s iconic stripes, but the most striking design element is the colored display bezel and hinge caps.

In contrast, the standard Galaxy Z Flip, and indeed the original Galaxy Fold, have black display bezels and hinge caps regardless of what flavor they carry on their backs. The Galaxy Z Flip Thom Browne Edition breaks this rule and, more importantly, it looks the part.

Prices are unknown but rumored to hover around the $2,500 mark. This premium is in part justified by the fact that the retail box includes not only the smartphone itself but a Thom Browne protective case, a smartwatch and a pair of Galaxy Buds+ as well.

The Galaxy Z Flip is not waterproofed, says the fine print

Finally, even though this probably won’t surprise anyone who has any knowledge of the original Galaxy Fold, one last detail that’s been confirmed by this leaked ad is that the Galaxy Z Flip does not benefit from any waterproofing. The hinge caps – colored or not – aren’t enough to keep water outside of the device. Much like the OG Fold, the Galaxy Z Flip is going to need a bit of extra care from its owners. Whether or not it will be worth it is up to each individual.