Samsung vs Apple in 2020: Who won this rollercoaster of a year? 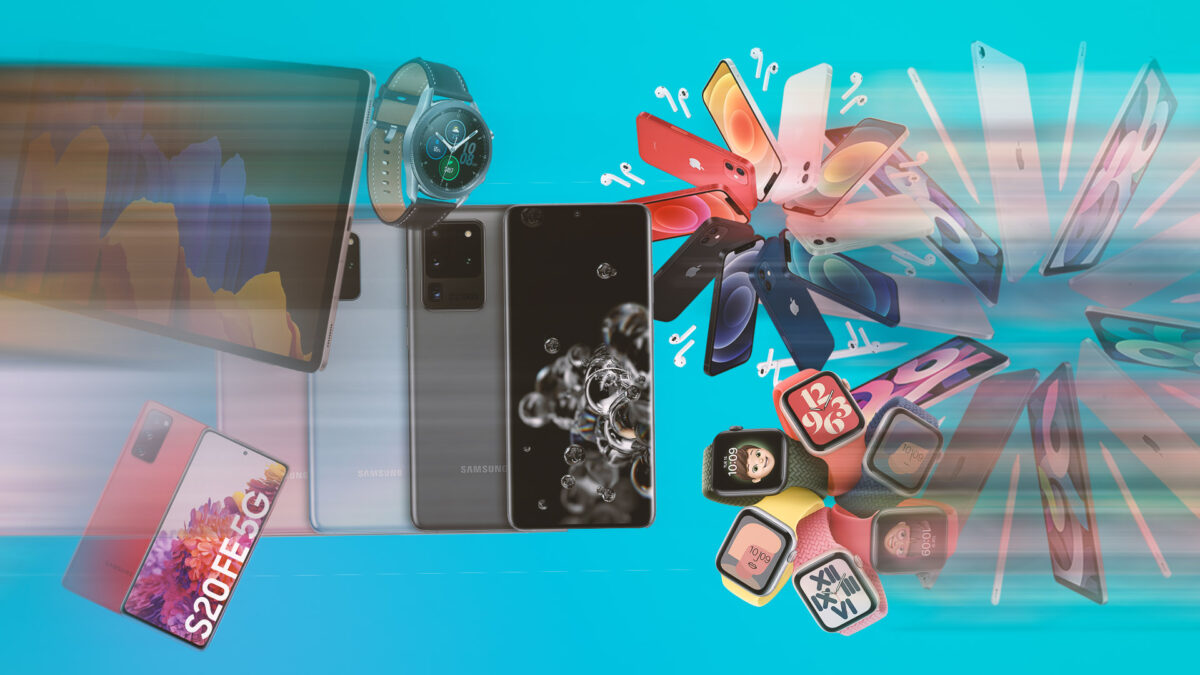 Quite a turbulent year with many upheavals is behind us, but does that mean Samsung forgot about its largest rival? About staying competitive even while going directly against a fast-growing mobile giant with essentially unlimited resources and ambitions? No, not Huawei, the U.S. gifted that win to Samsung on a silver platter already. Its second-largest rival, then – that fruit company backed by Forrest Gump.

Yes, it’s once again time to take a look at how Samsung has been doing in comparison to Apple—and vice versa—over the course of the last 12 months. Starting with what else than the lifeline of the consumer electronics industry – smartphones.

Samsung vs Apple in 2020 smartphones 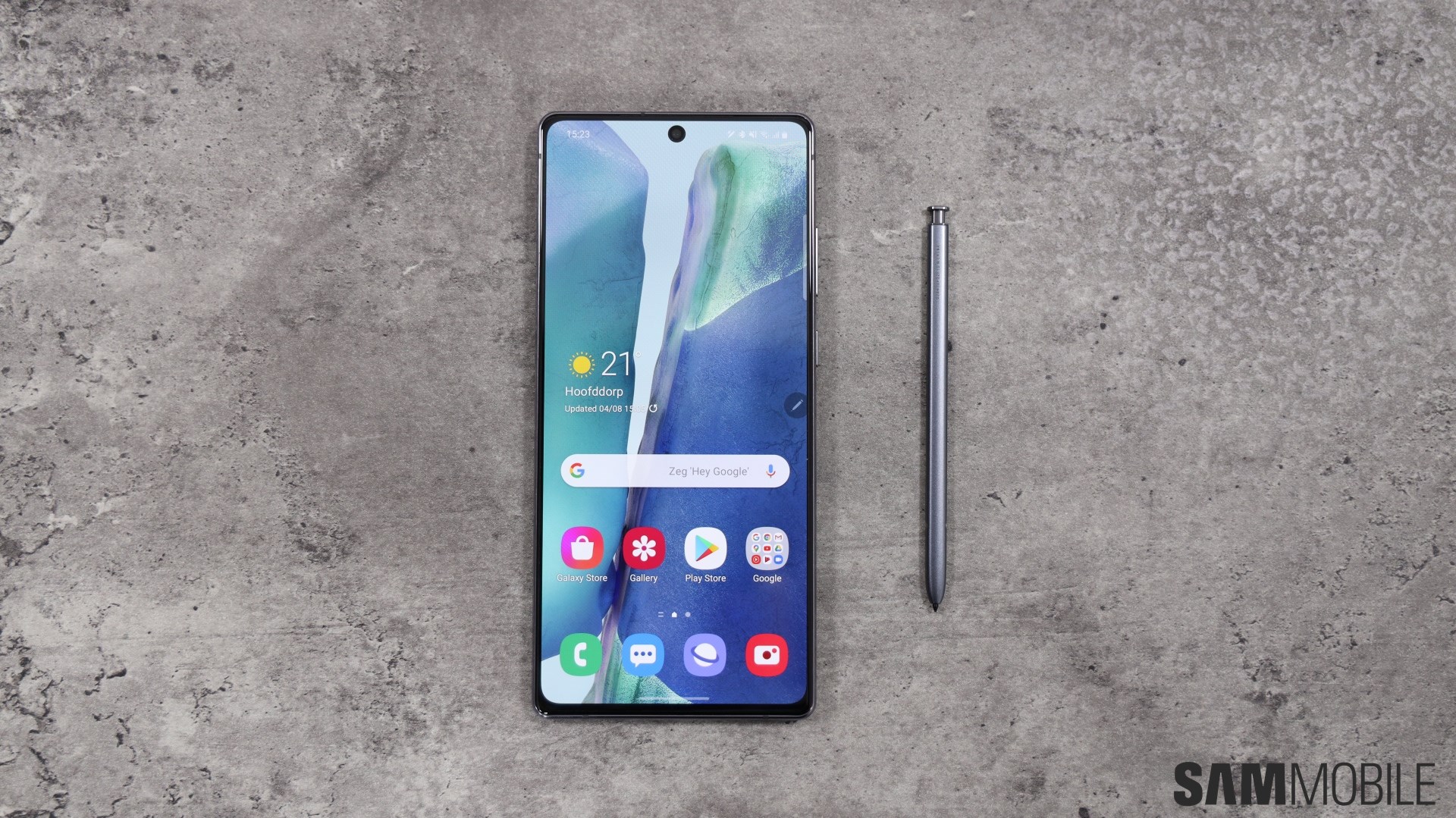 You probably won’t be surprised to learn that a bunch of people who got together to run a Samsung fan site prefers its smartphones over the iPhones. Even with the international models from the Galaxy S20 and Galaxy Note 20 series not being at their best this year due to a subpar chipset. Whereas Apple’s chips keep heading from the launch podium straight into history books due to how insanely efficient they are, but more on that in a bit.

We are still left with Qualcomm’s latest tech. I.e. the handful of high-end devices leveraging the Snapdragon 865 (and 865+), which is a beast in its own right. The smartphones sporting this cutting-edge SoC that Samsung released this year include the Galaxy S20, Galaxy S20+, Galaxy S20 Ultra, Galaxy Note 20, Galaxy Note 20 Ultra, Galaxy Z Flip 5G, and the Galaxy Z Fold 2. On top of those, we also saw the company return to its Fan Edition devices with the Galaxy S20 FE released just several weeks ago.

Apple, meanwhile, released fewer iPhone devices, as it usually does. But not as few as most suspected, seeing how its fall keynote eventually saw it unleash a new smartphone generation that spanned four devices in total: the iPhone 12, iPhone 12 mini, iPhone 12 Pro, and the iPhone 12 Pro Max. Making this the largest iPhone refresh ever. And that’s without even accounting for the iPhone SE (2020) which launched back in late April.

That budget device is actually the only one that we’d say easily beats anything Samsung puts out in the same price range. Which is $399. For that same price, a Samsung Experience Store clerk would recommend you get the Galaxy A51 nowadays, which is an all-around inferior device in terms of everything but interesting color choices.

And so, 2020 gave us a modest Apple that’s focusing on emerging markets and cost-effective smartphones, and a remarkably greedy Samsung whose principal mobile offerings mostly started at the $999 mark. Going up to some truly eye-watering figures, at that. But with seminal flexible-display products such as the Galaxy Z Fold 2, Samsung definitely ended up turning more heads than anyone else. It even outperformed Apple on its home turf for the first time in three years.

Samsung vs Apple in 2020 tablets

On the premium end of the spectrum, the Galaxy Tab S7 and Galaxy Tab S7+ offered pretty significant upgrades over their predecessors – the latter more so than the former. Paired with the S Pen, Samsung once again delivered a tandem of highly capable Android tablets that are easy on the eyes and can last you all day long on a single battery charge. 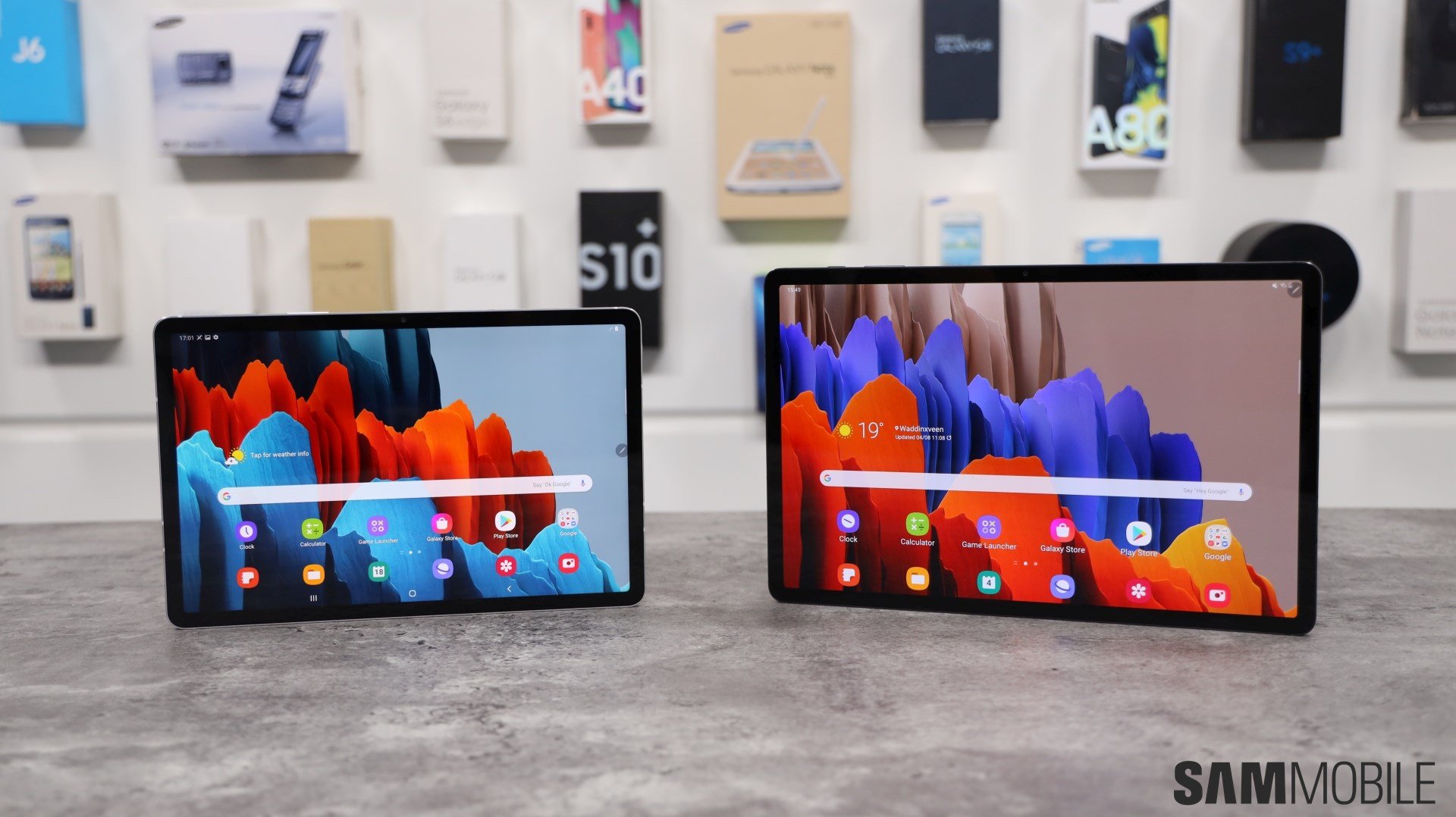 Yet the iPad remains in a category of its own. The fourth-generation iPad Pro 12.9 and second-generation iPad Pro 11 both easily outperform Samsung’s slates from the standpoint of computing prowess and longevity. As a drawing utility, the S Pen is still edged out by the Apple Pencil, which feels more like a pencil than Samsung’s stylus. And the iPad Pro feature list makes this tablet range a more capable replacement for a typical laptop. Samsung’s only slight advantage in high-end tablets was more competitive pricing – arguably the last thing anyone looking to pay a premium for a tablet will care about.

Outside of cutting-edge tablets, the eight-generation iPad 10.2 is even more dominant than its more expensive counterparts. Because not only does it retain the majority of the relative advantages touted by the iPad Pro series, but it does so at a ridiculously low price point which starts at $329. For that modest amount, Samsung was ready to offer… the Galaxy Tab A7. Which doesn’t even deserve to be in the same sentence, value-wise.

Sitting somewhere in the middle is the fourth-generation iPad Air that Samsung didn’t even try to challenge directly. But even the $649 Galaxy Tab S7 looks like a pretty underwhelming package compared to the supposedly mid-range $599 iPad Air and its ridiculously powerful A14 Bionic chip.

Samsung vs Apple in 2020 wearables 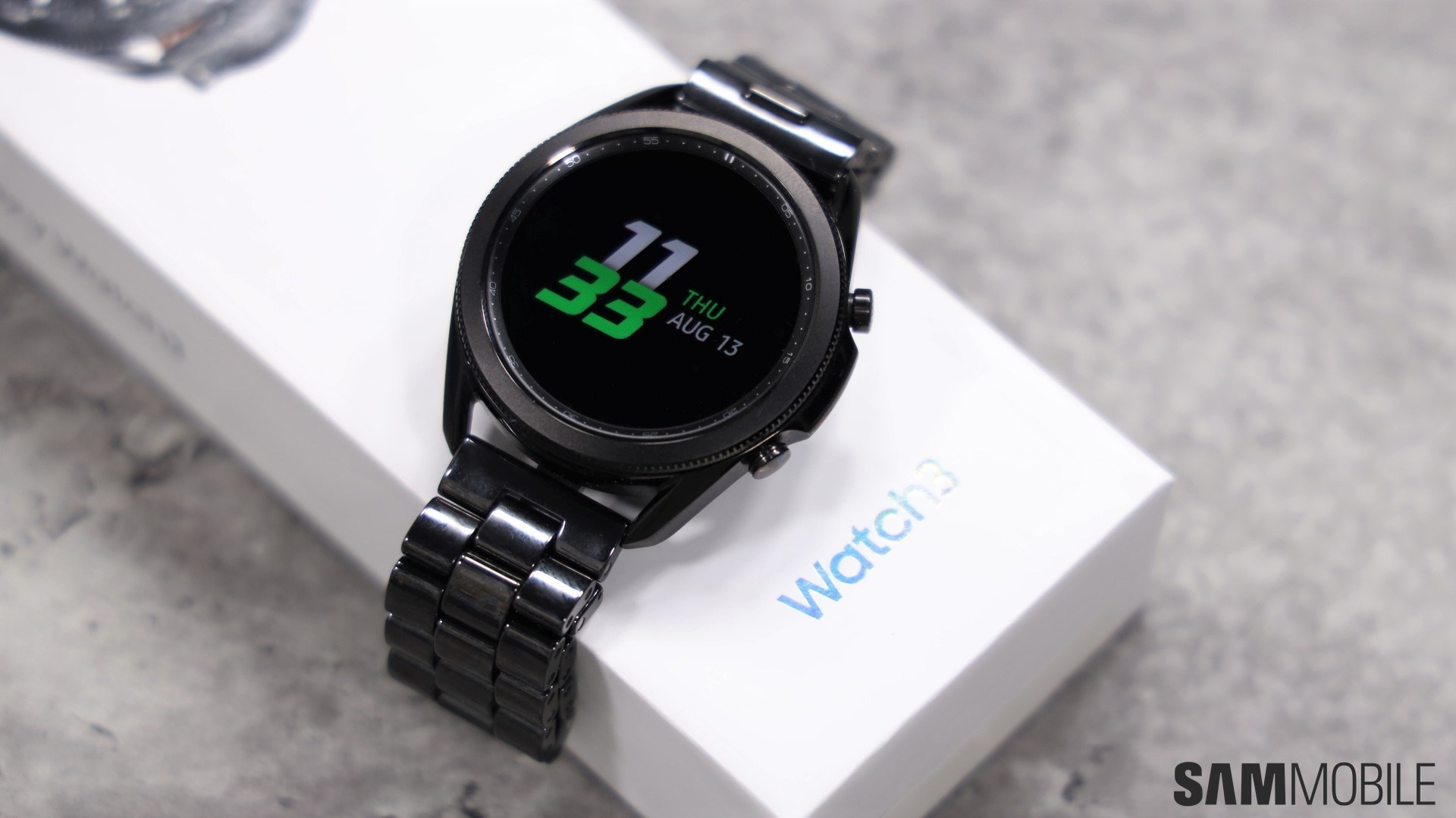 Both the Galaxy Watch 3 and Apple Watch Series 6 were highly iterative device generations with identical pricing which started at $399. Both opted to focus on niche features such as a built-in electrocardiogram (EKG or ECG) and blood oxygen monitoring.

And while Apple is once again charging a premium for its aluminum fitness trackers, Samsung is offering stainless-steel smartwatches that are way less conspicuous design-wise. The Apple Watch Series 6 unsurprisingly edges out the Galaxy Watch 3 range in terms of available apps. But at the same time, we haven’t exactly found many more watchOS apps actually worth using on a daily—or any—basis.

So, while we’d describe the sixth-generation Apple Watch as a great addition to Apple’s ecosystem, the Galaxy Watch 3 is just a quality wearable range overall; one that will serve you well no matter what smartphone, tablet, wireless headphones, or notebook you’re already using.

Samsung vs Apple in 2020 chips

Chips are one area wherein Samsung mostly frustrated us in 2020. Because the Exynos 990 fiasco was disappointing at best and humiliating at worst. Meanwhile, Apple went from strength to strength with the release of the A12Z Bionic, A14 Bionic, and the M1 system-on-a-chip.

Custom-grade silicon superiority is a big part of the reason why Apple continues to dominate in the tablet space. With the M1, the company has even gotten bold enough to begin ditching Intel processors altogether. Meanwhile, Samsung SLI’s Exynos designs are still oscillating on an annual basis. And this year has definitely been another low point for the South Korean tech giant. While things might be looking up going into 2021, Samsung still has a massive gap to close here. Even a world-class Exynos 2100 would hence be just the beginning and far from the end of that tribulation-filled road.

Samsung vs Apple in 2020 audio tech 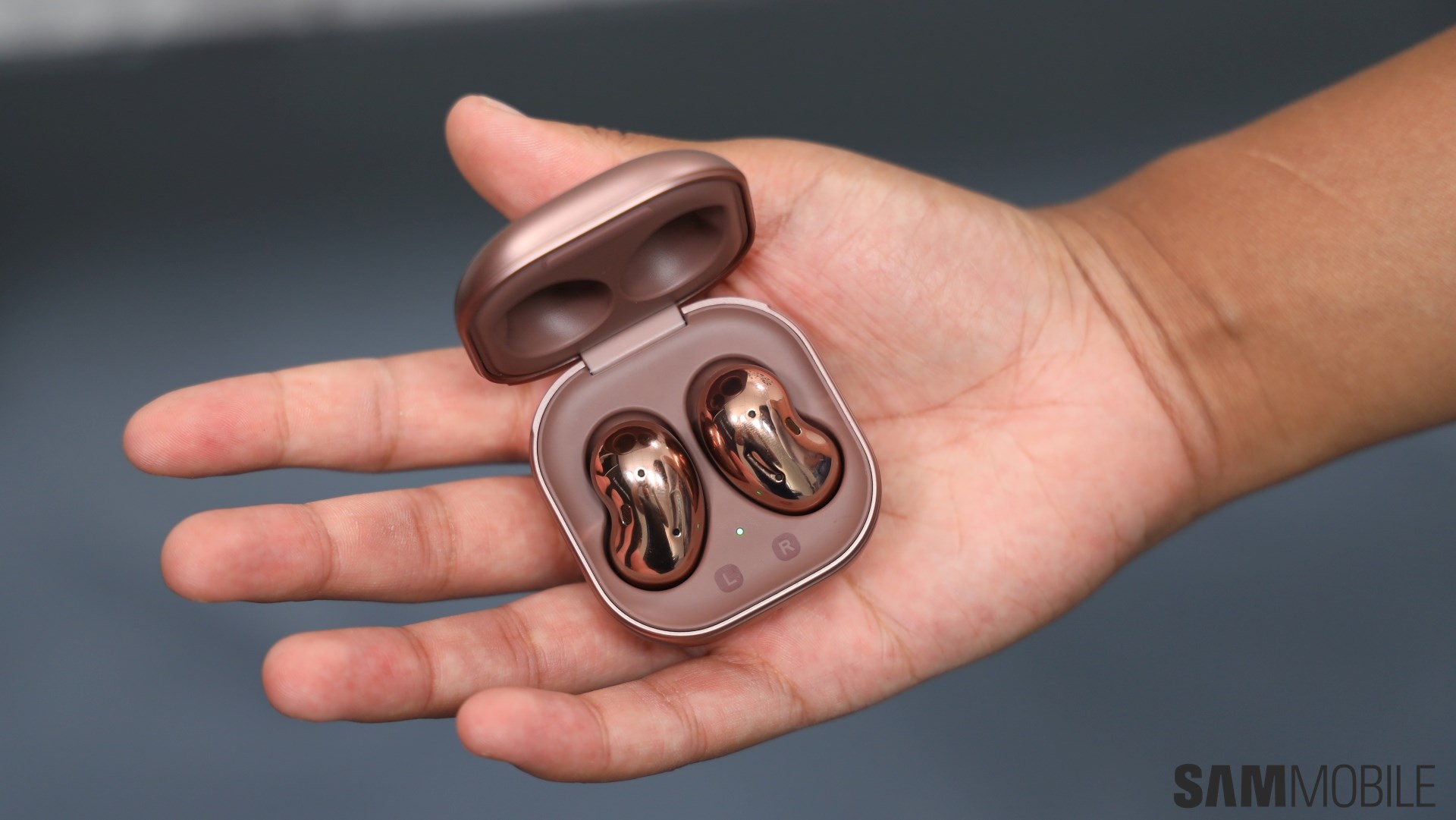 The HomePod Mini was this year’s most significant addition to Apple’s audio portfolio. Which is to say, Apple didn’t do much in this segment throughout 2020. The HomePod Mini was also more of a smart home bet than a high-end audio one. In that regard, the continued expansion of SmartThings easily impressed us more.

As for wireless audio, Samsung continued to make waves with the release of the Galaxy Buds+ and Galaxy Buds Live. Both models offer superior sound quality, unprecedented repairability, and greater overall value compared to Apple’s AirPods line. As if that weren’t enough, Apple decided to close out the year with the launch of the AirPods Max, arguably the most overpriced piece of audio gear in recent memory.

While Samsung doesn’t have a direct AirPods Max rival, you can get two pairs of comparable over-ear headphones for the $549 price Apple is asking for. I would personally recommend the Marley Exodus and Focal Listen Wireless as superior alternatives that also happen to work great with both Galaxy smartphones and iPhones. Otherwise, just get a pair of Galaxy Buds Live and use the remaining $430 toward something more consequential than a first-generation Apple gadget.

Though the iPad remains in a class of its own, Samsung tech still edged out Apple, from our perspective. And Apple’s growing dominance in chips won’t become truly meaningful until software catches up to its cutting-edge silicon. Which we don’t really see happening anytime soon.

Meanwhile, Samsung’s clever foldable strategy and well-rounded wearables continued to impress throughout 2020. And that’s without even accounting for its new audio products which delivered greater value while being platform-agnostic, which is a consumer-friendly trait Apple would never even think to pursue.

Do you agree with this comparison? Think we cut Apple too much slack? Or were you less impressed with Samsung’s 2020 smartphones than we were? Let us know in the comments and all the best in the year ahead!