You can now get the Galaxy A51 from Verizon for free on a 2-year plan
Samsung India launches best-ever Galaxy A51 model with even more RAM
Galaxy S20 series ships 32.6% below S10 in Q1, Galaxy S20+ leads 5G
Galaxy A51, Galaxy S20+ were among best-selling Android phones of Q1 2020
[Poll Results!] Are you a budget/mid-range Galaxy phone user? Tell us why
Galaxy A51 One UI 2.1 update adds screen recorder, but it doesn’t work
Galaxy A51 was Samsung’s best-selling smartphone in Q1 2020
8GB Galaxy A51 joins the 6GB model in Malaysia, costs $23 extra
Galaxy A51 starts getting One UI 2.1 update with April 2020 security patch
Samsung Brazil debuts Mother’s Day deals on new Galaxy phones

Given how popular the Galaxy A50 turned out to be, the Galaxy A51 had big shoes to fill. It was the first of the 2020 Galaxy A series that Samsung unveiled in December 2019. Samsung’s strategy of packing mid-range devices with technology well and truly continued with the Galaxy A51. The device was among the first in its class from Samsung to feature a macro camera at the back.

Samsung also took a new design direction with the 2020 Galaxy A series. The Galaxy A51 was the first device to give us a glimpse of this new direction. It adopts a new L-shaped camera array and places all of the buttons on the right side of the frame. The centered punch hole for the front camera also makes its way from the Galaxy Note 10 to more affordable devices with the Galaxy A51. 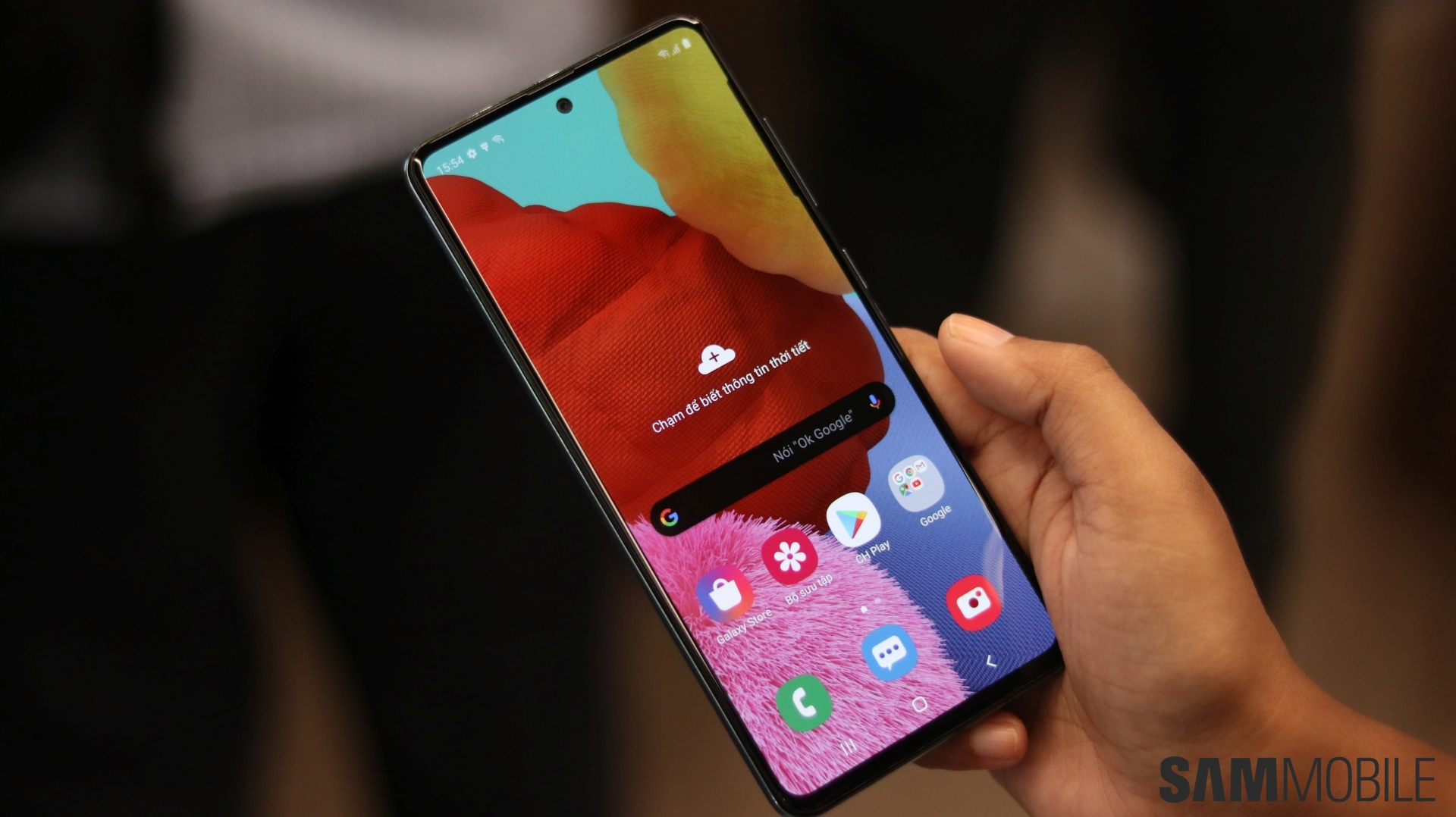 Much like its predecessor, the Galaxy A51 is made from a material that Samsung is calling Glasstic. It’s not actual glass, but plastic that resembles glass. It measures 158.5 x 73.6 x 7.9mm and weighs 172g. The centered punch hole display always for slimmer bezels overall.

The volume and power keys are placed at the right side of the frame. There’s an L-shaped camera module at the back. The device retains a 3.5mm headphone jack and has a USB Type-C port at the bottom. The speaker can also be found at the bottom. 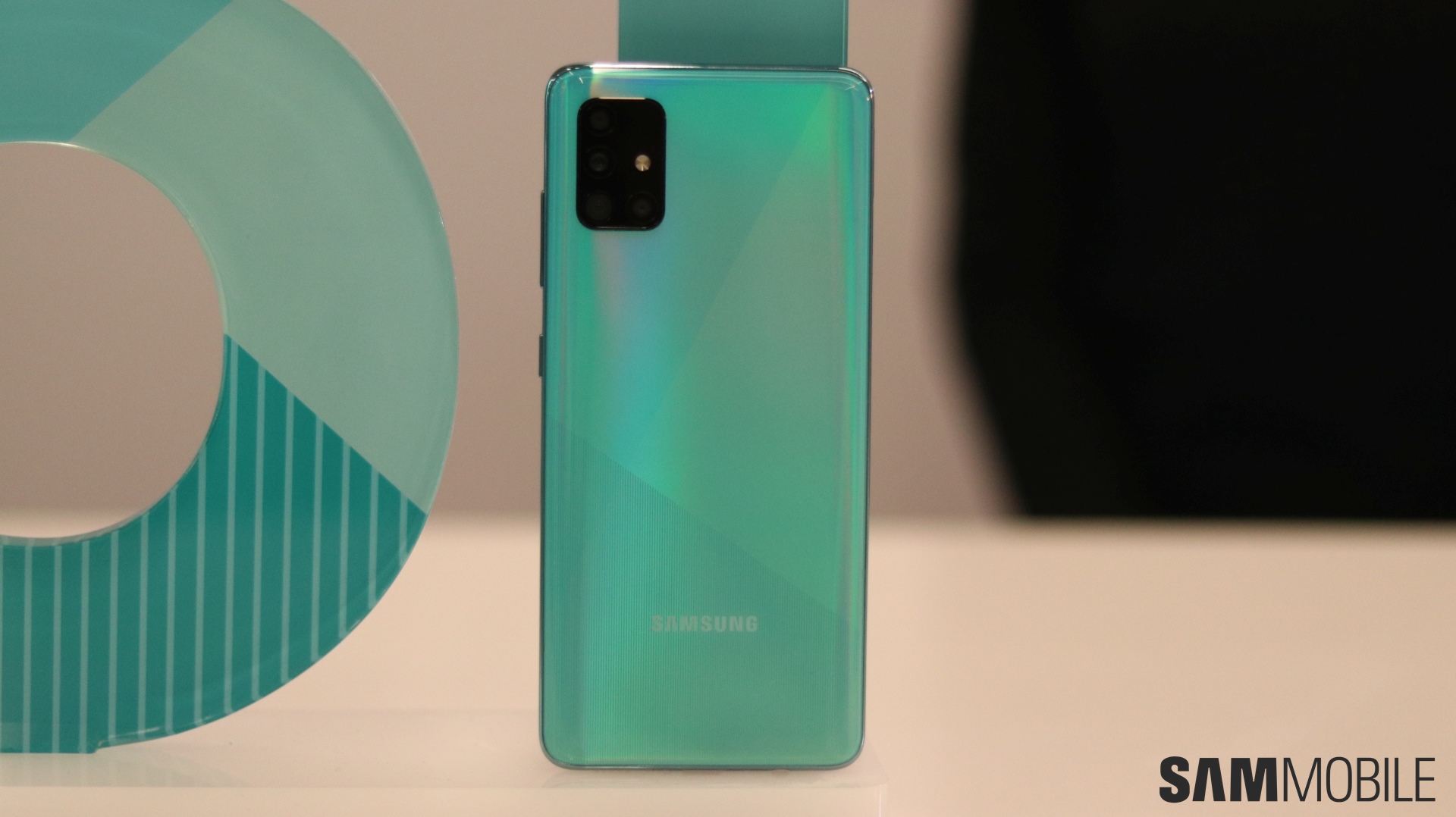 The Galaxy A51 is powered by an Exynos 9611 processor and is offered in 4/6GB and 64/128GB RAM and storage variants respectively. The 6.5-inch FHD+ 1080×2400 pixel resolution panel has an in-display fingerprint sensor as well. The 4,000mAh battery supports 15W fast charging.

The full list of specifications for this device can be found on our Galaxy A51 specs page. 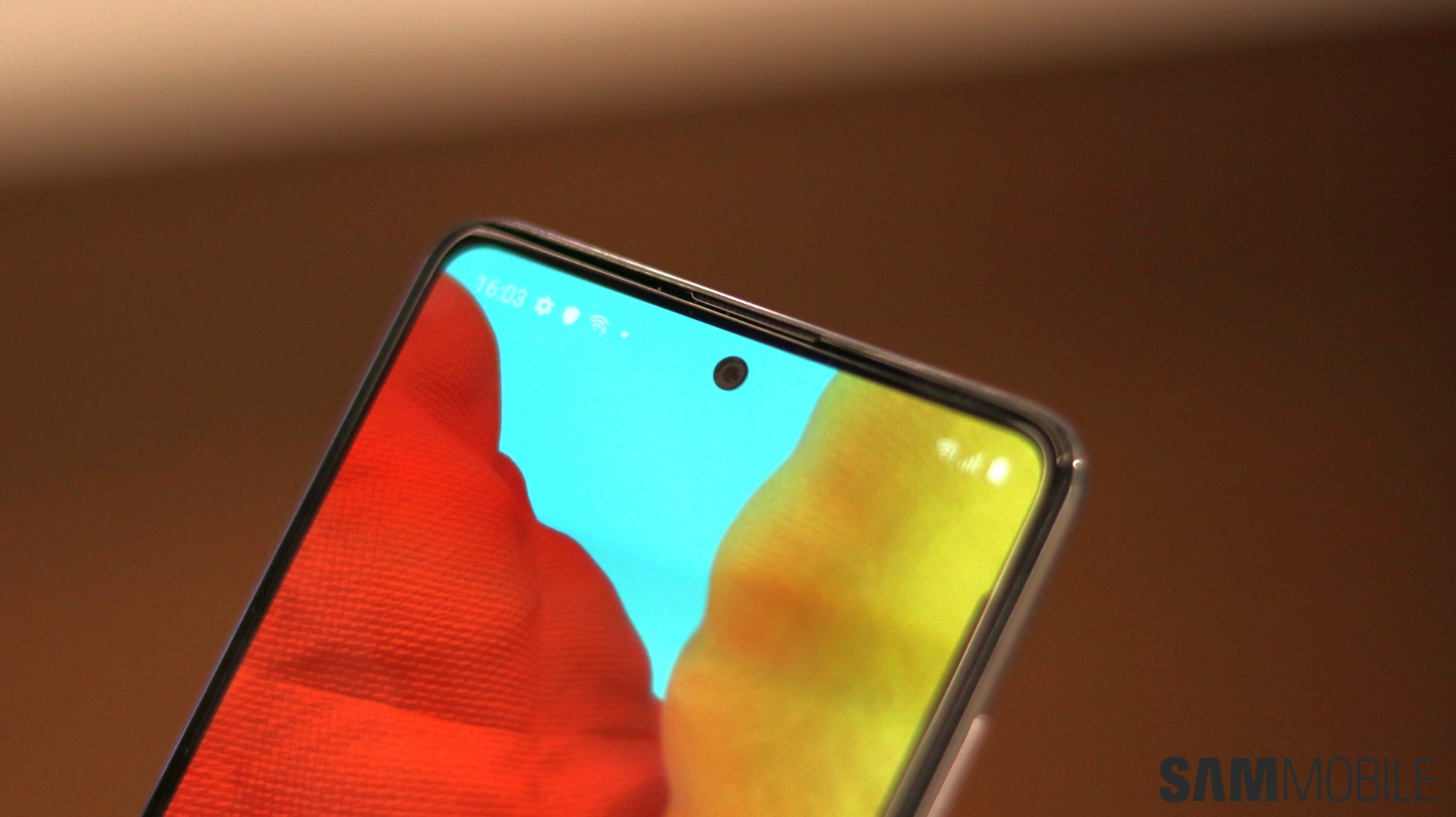 The Galaxy A51’s display has slimmer bezels than its predecessor courtesy of the Infinity-O display which puts the front camera in a hole inside the panel itself. The panel measures 6.5-inches with FHD+ resolution. 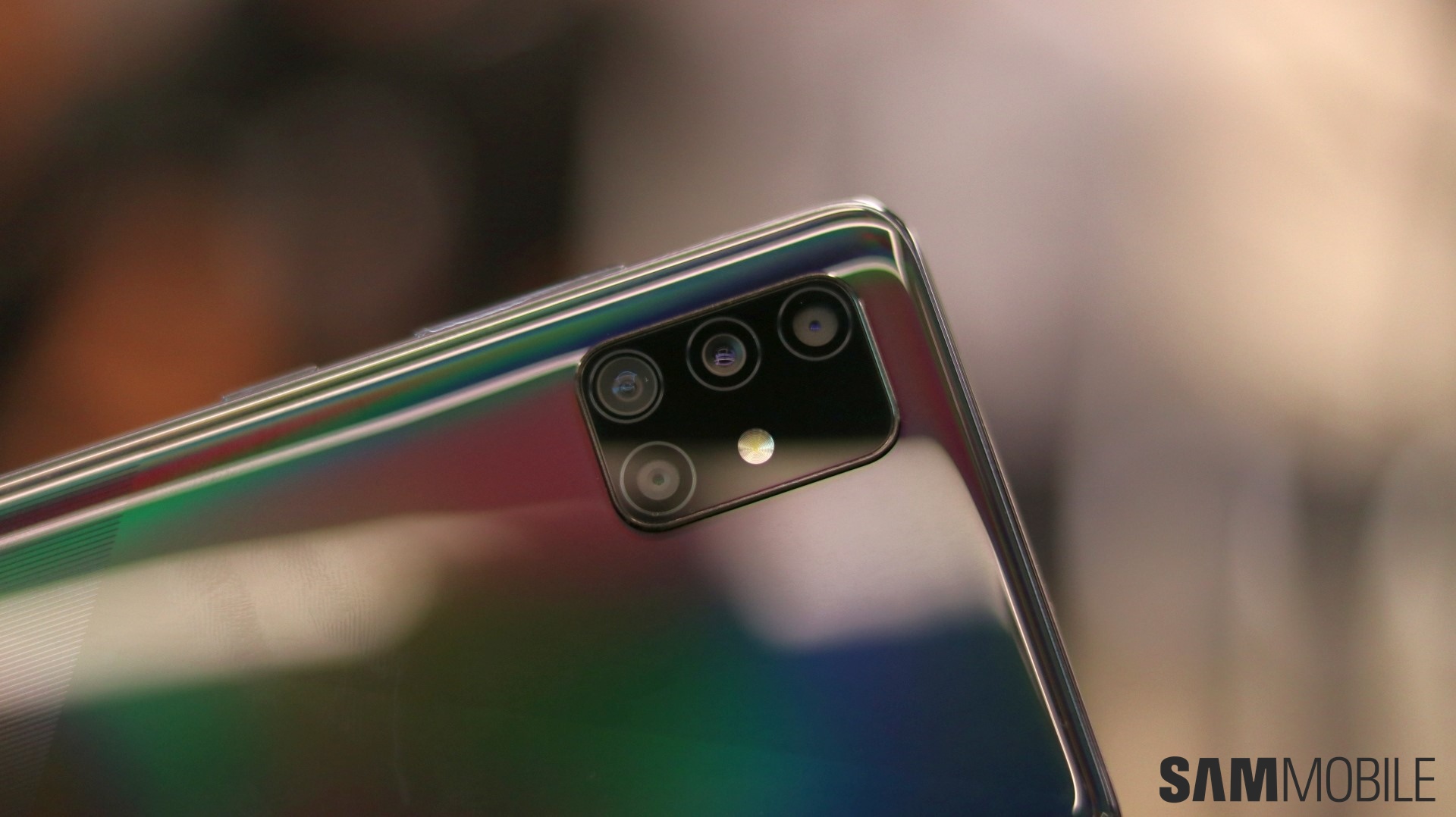 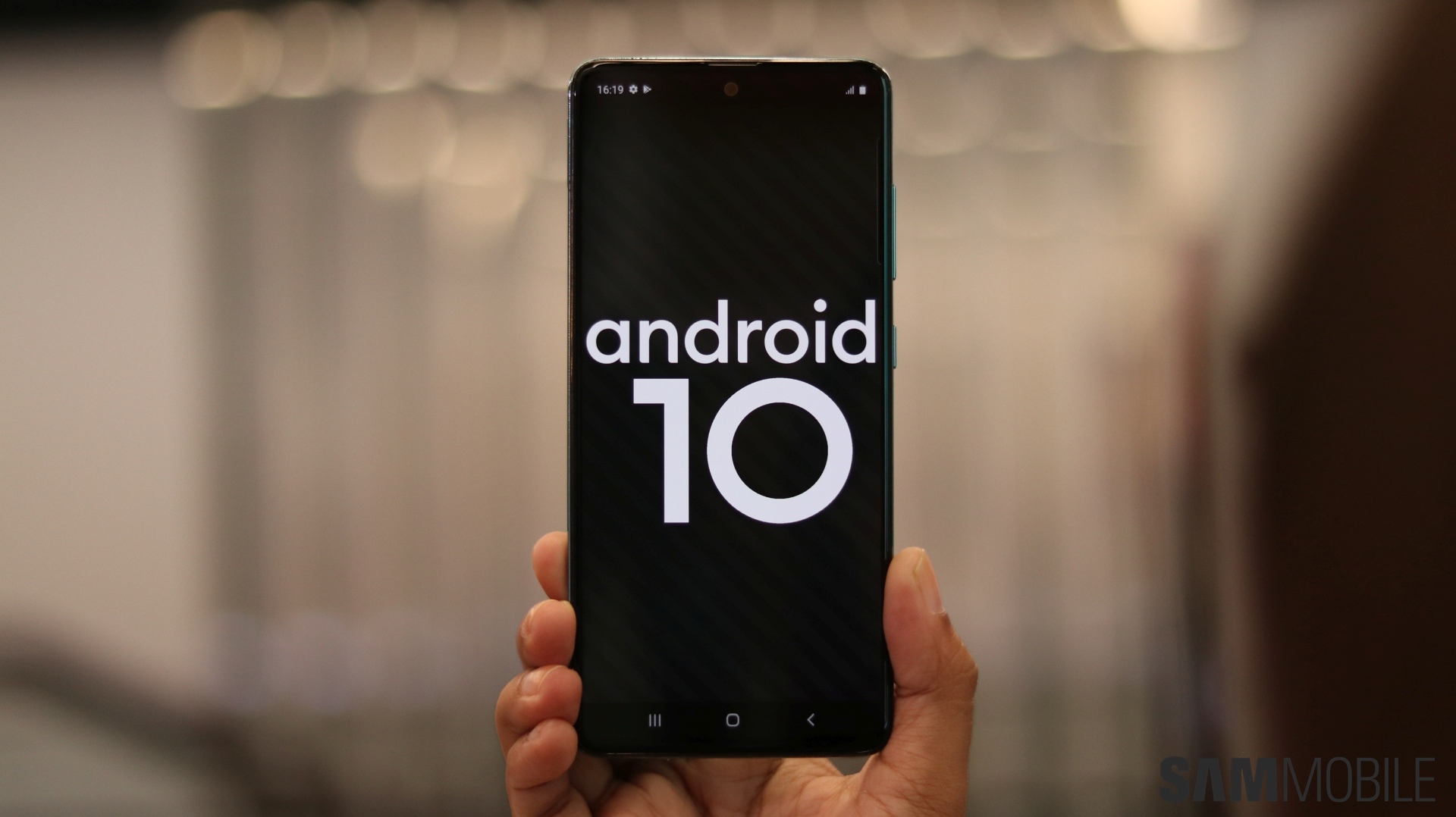 The Galaxy A51 comes with Android 10 installed out of the box. That was to be expected as the new Galaxy A series for 2020 wouldn’t have launched with Android Pie. This also makes it the first Samsung smartphone to come with Android 10 and One UI 2.0 pre-installed. Check out our One UI 2.0 feature focus series to learn more about all of the new features.

SamMobile offers firmware, Samsung APKs and wallpapers for every Samsung device. This obviously includes the Galaxy A51 as well. All of the content can be downloaded for free from our website. Do consider our optional premium plans as well that come with added benefits like expert support, product giveaways, faster download speeds, ad-free browsing, and more. Keep following our coverage of the Galaxy A51 to learn more about the device.