Samsung officially announced the Exynos 9810 processor not too long ago. The Galaxy S9 will be the first handset to be powered by this processor and now the first Galaxy S9 Exynos 9810 benchmark has surfaced online. The single-core and multi-core scores will leave you impressed when you compare them with the recent Qualcomm Snapdragon 845 benchmark.

An Exynos 9810-powered Galaxy S9 bearing model number SM-G960F has now surfaced on the Geekbench website. The listing mentions a single-core and multi-core score of 3648 and 8894 respectively.

That’s quite a significant improvement over the previous high-end chip – the Exynos 8895 – which powers devices like the Galaxy S8 and the Galaxy Note 8. The 8895-powered Note 8 posted 1960 and 6473 single-core and multi-score scores, respectively.

The Snapdragon 845 was benchmarked recently and it returned average (median) scores of 2400 and 8400. Samsung is going to use this chip for some variants of the Galaxy S9 and the Galaxy S9+ in select markets like North America.

The SM-G960F that surfaced on Geekbench was running Android 8.0 Oreo with 4GB of RAM. Previous reports about the RAM and storage variants have suggested that only the Galaxy S9+ will feature 6GB of RAM. The chip’s base frequency is listed as 1.79GHz but it’s likely going to be the clock speed of the little cluster.

It goes without saying that benchmark results are not the end-all, be-all of performance indicators. One can count on the chip’s generational improvement to deliver performance gain but that will only be quantified once we put the device through real-world tests to see how it really performs. The scores themselves can only be properly verified once the device is out and people can run benchmarks themselves.

Bear in mind that it’s still early days as far as Exynos 9810 benchmarks are concerned, not to mention that benchmark results can easily be faked. Expect to see more results surface in the days leading up to the launch. 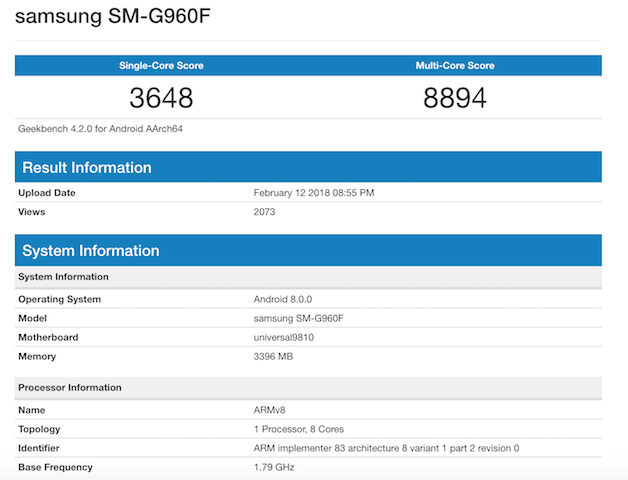