The Galaxy Note 5 represented a turning point for Samsung’s flagship phablet series. Much like it had done with the Galaxy S series, Samsung elevated the phablet’s build quality by ditching plastic in favor of a metal and glass unibody construction. It was the first Galaxy Note handset to feature these materials and every subsequent model has stuck with them. 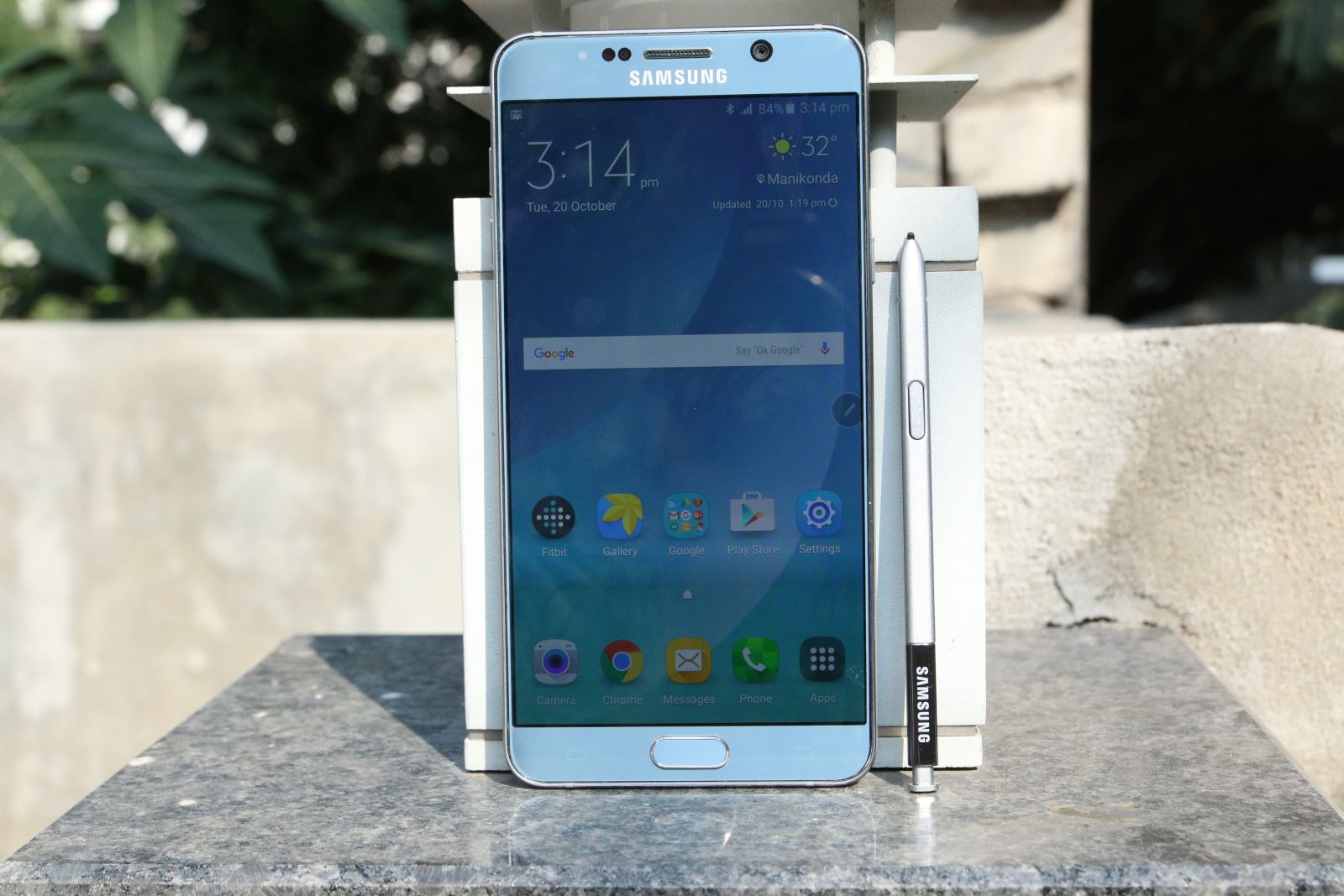 Samsung has always aimed the Galaxy Note flagships at power users so surprisingly, the Galaxy Note 5 was packed to the hilt with powerful new features. It also featured an S Pen, which remains one of the biggest selling points of the company’s Galaxy Note devices. 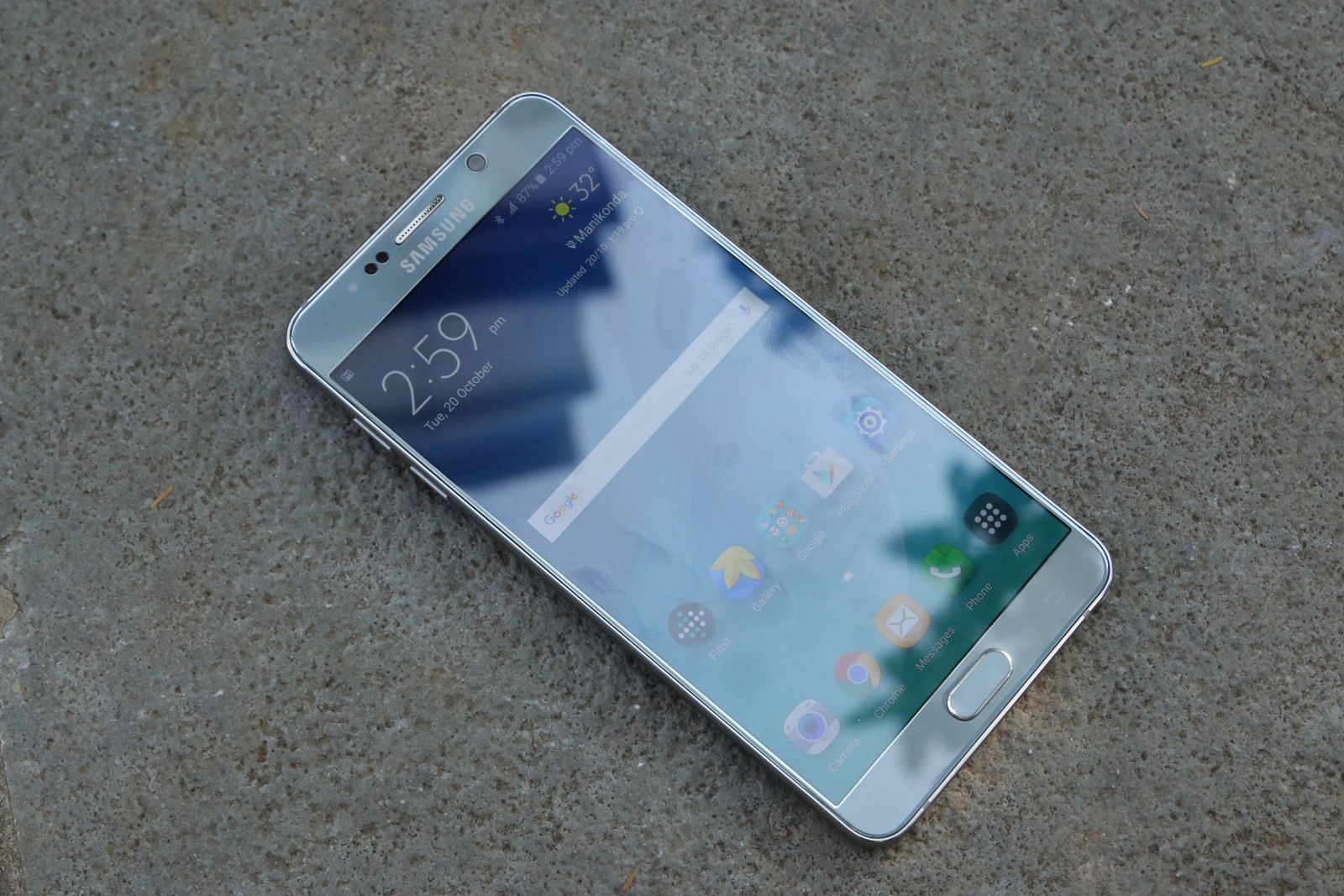 The Galaxy Note series has always had a very distinctive silhouette and Samsung retained that while giving it a major upgrade in the material quality department. The metal and glass unibody construction meant that the battery was no longer removable, but it also made the device look very premium. Since these materials can tend to be very slippery, Samsung added gentle curves to the back so that the phone wouldn’t just slip out of users’ hands.

The Galaxy Note 5 measures 153.2 x 76.1 x 7.6 mm and weighs 171g. It doesn’t have an IP rating for water and dust resistance. The micro-USB port at the bottom is accompanied by a 3.5mm headphone jack and a speaker. The home button on the front has an embedded fingerprint sensor with back and recent apps keys to either side of it. 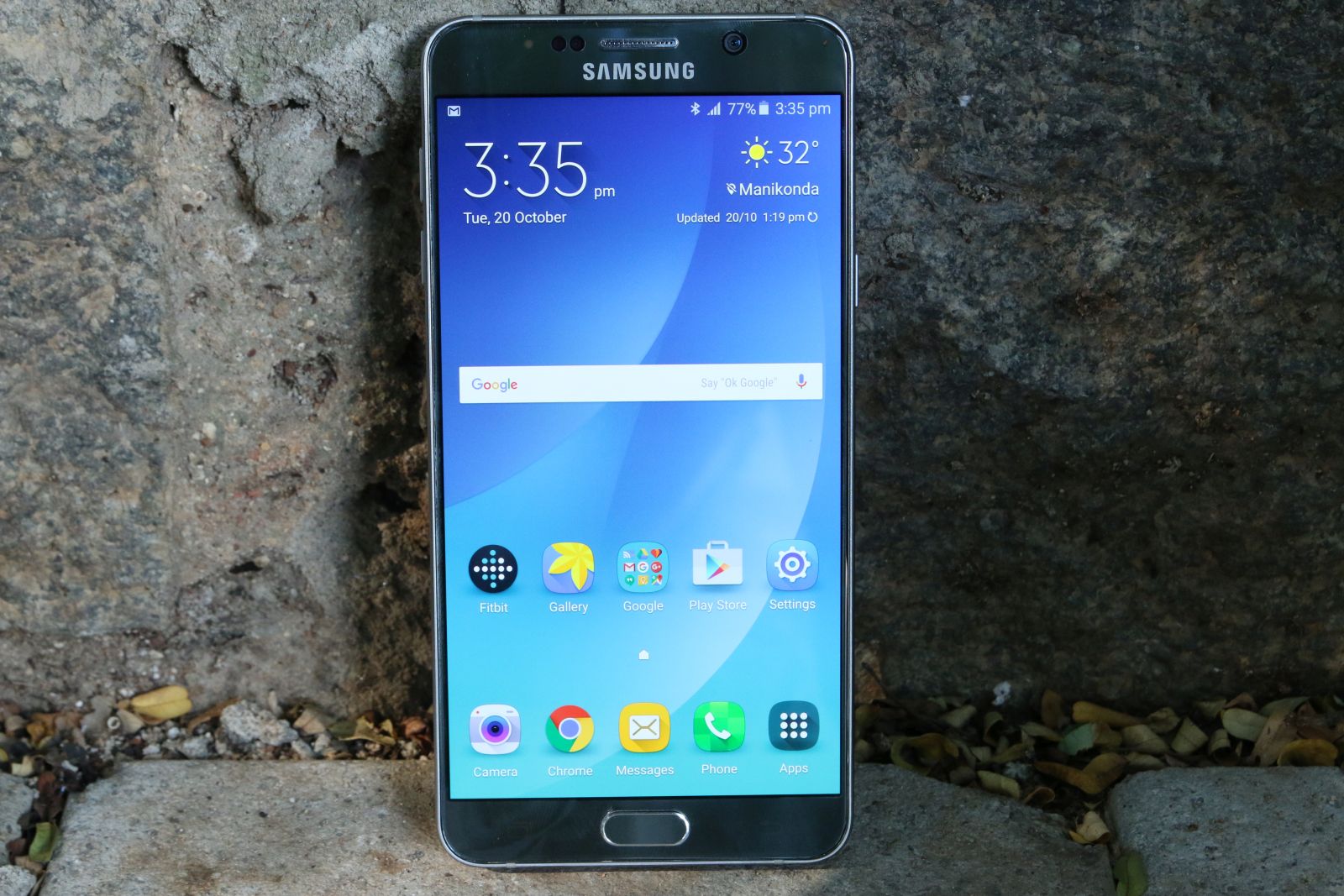 Samsung equipped the Galaxy Note 5 with a 5.7-inch Quad HD (2560×1440) pixel resolution Super AMOLED display. It was a flat panel with vibrant colors and the ability to get nice and bright. The viewing angles gave little to complain about as well. 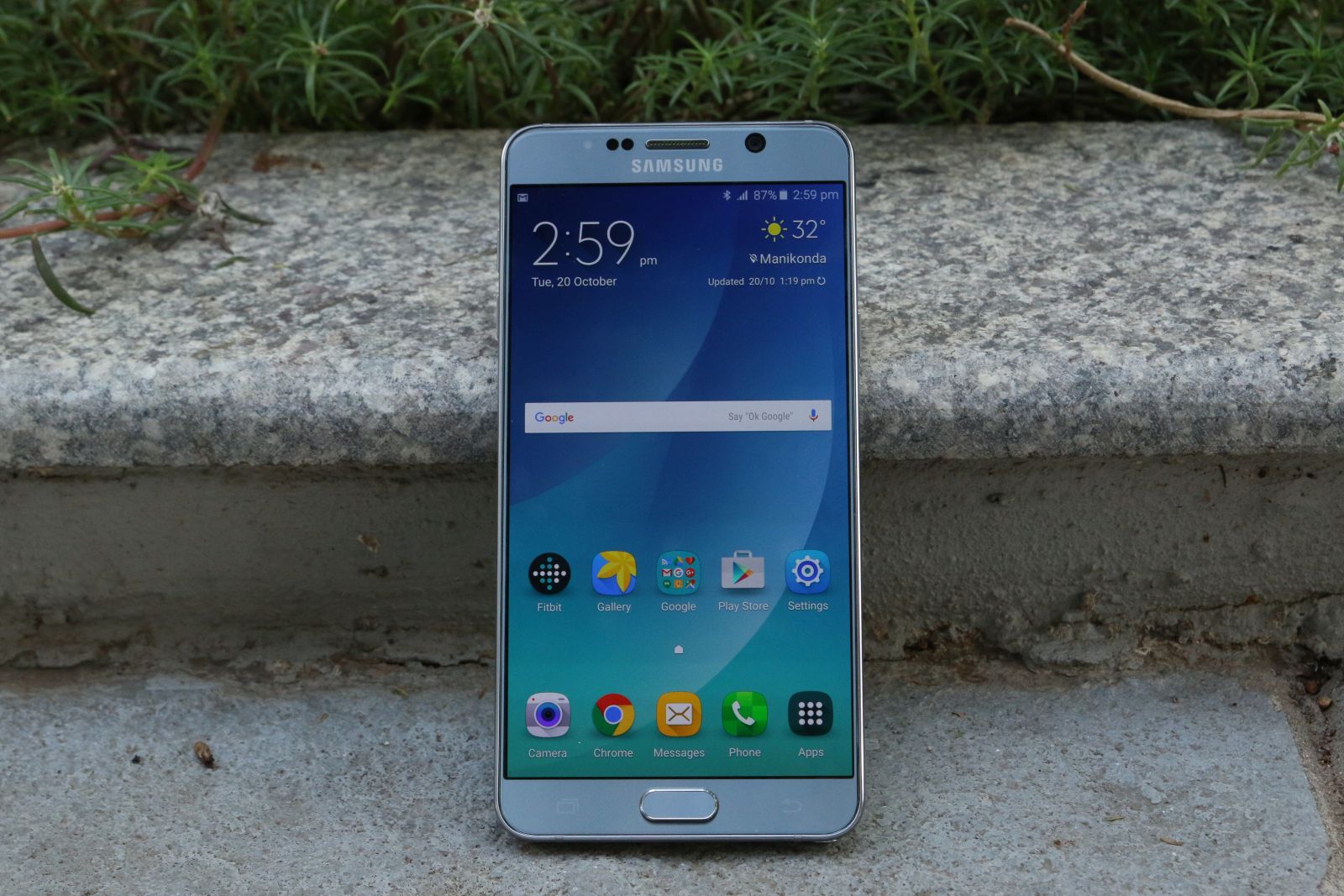 A 2.1GHz Exynos 7420 was selected to power the Galaxy Note 5 paired with 4GB of RAM and 32/64/128GB storage options. Unfortunately, since the device didn’t feature a microSD card slot, it wasn’t possible to expand the storage externally.

A 3000mAh battery is present onboard, but due to the unibody construction of the device, this was the first Galaxy Note handset to note feature a removable battery. It did have support for wireless charging, though. 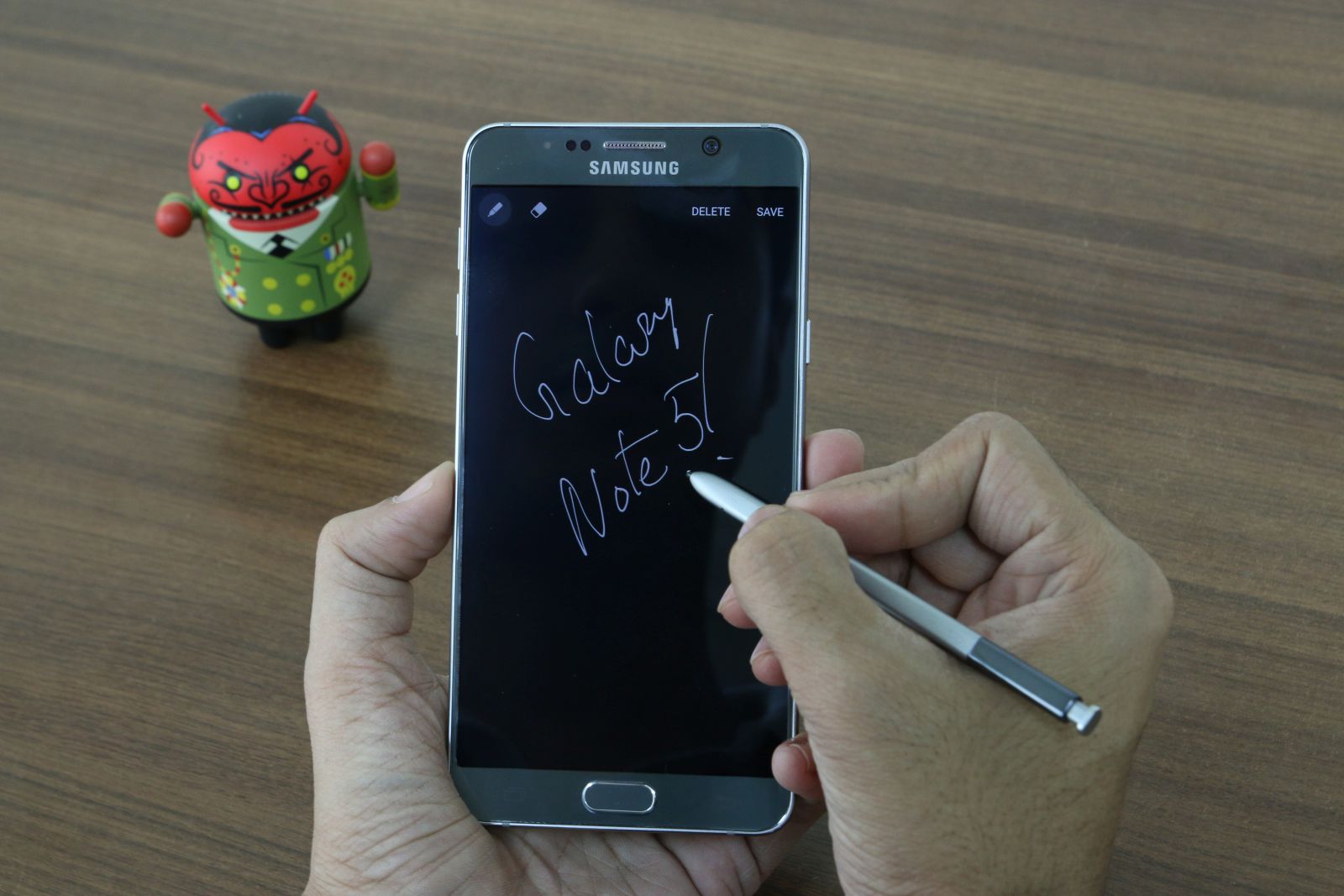 Samsung changed the S Pen’s design with the Galaxy Note 5 and it looked a lot more like a normal pen compared to previous iterations. Samsung also used a push-to-eject mechanism for a more secure fit for the S Pen.

Several new features were introduced for the stylus with Screen off memo being one of them. It allowed you to take notes with the stylus even when the screen was off. The Air Command menu had two extra slots, allowing users to add shortcuts to their favorite apps. 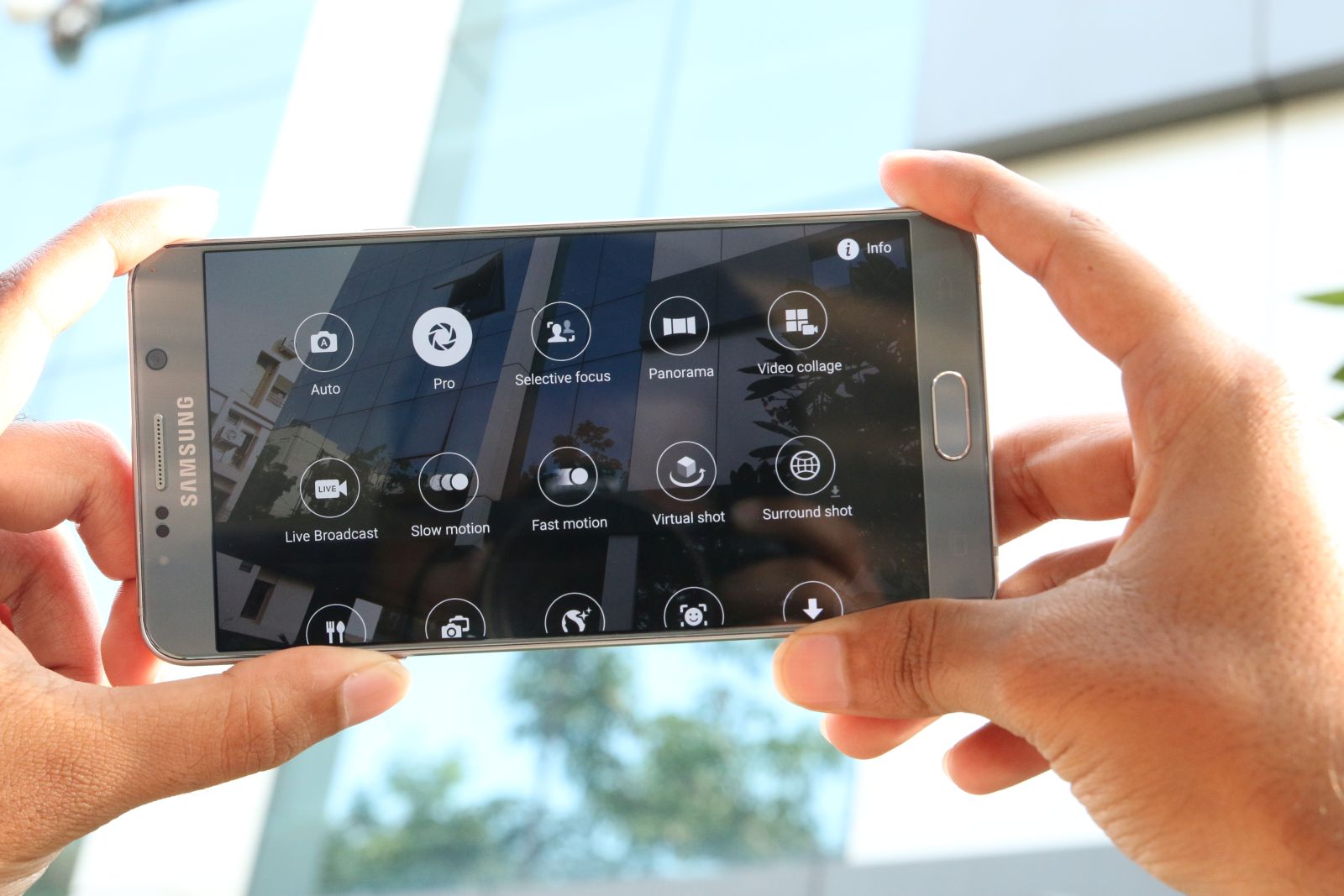 The Galaxy Note 5 had the same camera setup as the Galaxy S6 lineup, which meant that it had a primary 16-megapixel f/1.9 camera with an LED flash and Optical Image Stabilization. Live Broadcast was a new camera mode on the device which allowed users to stream whatever they were recording directly to YouTube. Selfie duties were performed by a 5-megapixel f/1.9 camera. 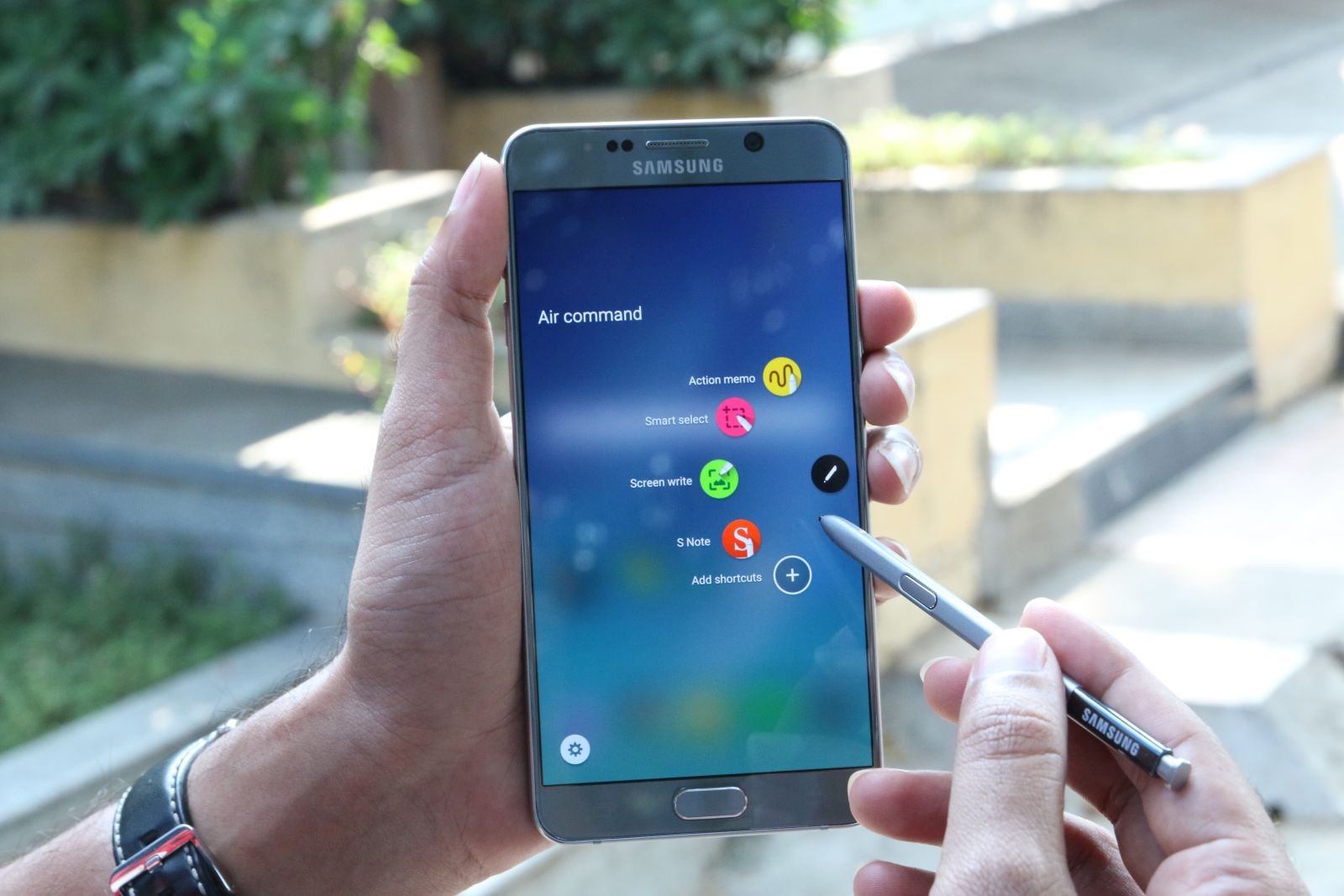 Samsung shipped the Galaxy Note 5 with Android 5.1.1 coupled with the lightest and fastest version of TouchWiz at that point in time. It removed a lot of gimmicky features to allow for a more intuitive software experience. Samsung retained some of its well-received features like Smart Stay, Multi-Window and Download Booster.

The Galaxy Note 5 was unveiled in August 2015. Pre-orders for the handset started on August 13, 2015. With prices starting north of $700, it was offered in Black Sapphire, Gold Platinum, Silver Titanium and White Pearl colors.

Samsung did not release the Galaxy Note 5 in Europe, opting to offer only the Galaxy S6 edge+ across the continent.

We have just about every Galaxy Note 5 firmware available for download. You can also take advantage of our free APK downloads and wallpapers. Do check out our premium membership plans that offer additional incentives such as faster downloads, giveaways, expert support, dark mode, ad-free browsing, and more.