Samsung has released Android Oreo for many of its smartphones, flagship and mid-range alike, but they have only been upgraded to version 8.0. It’s yet to upgrade any device to version 8.1 and it appears that Samsung might do that with the Galaxy J5 (2017). This particular mid-range device is yet to receive its Oreo update and there’s some evidence to suggest that when the update does arrive, it will bump up the device straight to Android 8.1 Oreo.

It’s already known that Samsung is going to update its 2017 Galaxy J series to Android Oreo over the summer. The handsets should start receiving the update over the next couple of months in the relevant markets across the globe.

There’s some evidence to suggest that when the update finally arrives for the Galaxy J5 (2017), it will upgrade the device straight to Android 8.1 Oreo. A benchmark listing has surfaced on GFXBench revealing that a Galaxy J5 (2017) running Android 8.1 Oreo has been tested. The firmware is identified as “Samsung Android Edition” which can be taken as yet another indication that Samsung wants to bump up this device straight to version 8.1.

History is on the handset’s side as well. Some of you might remember that when the Galaxy J5 and Galaxy J7 (2016) were finally updated to Nougat last year, they got version 7.1.1 even though all of the other Samsung Galaxy smartphones got Android 7.0. Moreover, a GFXBench listing was also our first indication last year that these devices may be bumped up straight to version 7.1.1 of Nougat.

What’s unclear at this point in time is precisely when Oreo is going to be released for the Galaxy J (2017) handsets. We’ll be the first ones to let you know when Samsung starts rolling it out. 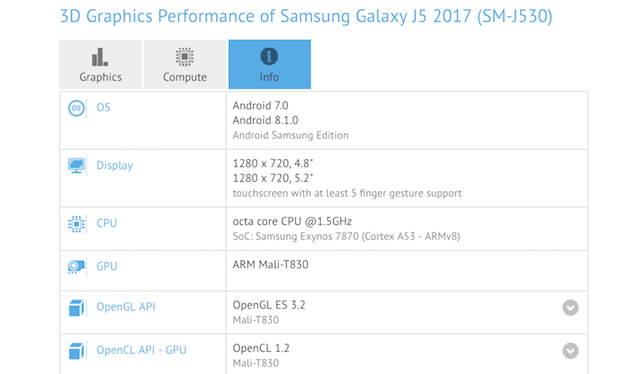