Galaxy J6 user manual appears ahead of May 22 release 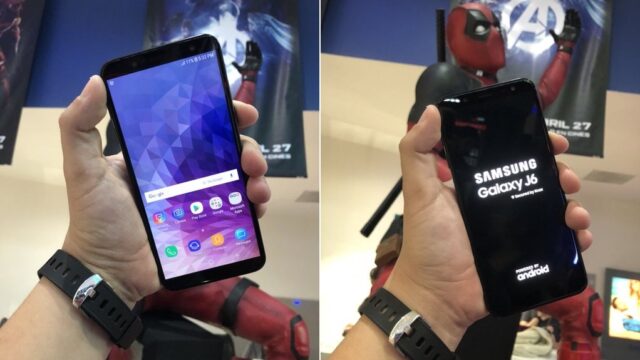 There’s really not much left that Samsung can surprise us with when it launches the Galaxy J6 and the Galaxy J4 in India next week. Almost all of the details have already been leaked online and even exclusively leaked live images of the Galaxy J6 thus confirming that it does indeed have a flat Infinity Display.

We also reported last week that the Galaxy J4 user manual was available online. Those who are interested can now also sift through the Galaxy J6 user manual which reiterates that the device has a couple of interesting features such as facial recognition and Dolby Atmos audio. The release date for the handset has also been revealed.

Both the Galaxy J6 and the Galaxy J4 feature a plastic back and while it’s removable on the latter which will let users pop in a spare battery, the same has not been extended to the Galaxy J6. It has a fixed plastic back to go with its flat 5.6-inch Infinity Display and 3,000mAh battery.

Go through the Galaxy J6 user manual and you’ll find that facial recognition is one of the new features on this device. Samsung has brought this feature to its lower mid-range smartphone now after adding it to the Galaxy A6 as well earlier this year. Face recognition will let users unlock their device by using the front camera to scan their face.

Samsung may have introduced the Dolby Atmos surround sound mode with its flagship devices but the feature has since trickled down to many of its non-premium handsets so it’s not surprising to see that Samsung has added Dolby Atmos support to the Galaxy J6 as well. The feature can be controlled from the Sounds and vibration menu in the Settings app.

Samsung has already sent out invites in India for an event which will take place on May 21. It appears that the Galaxy J6 release will take place the very next day in the country as there’s a page up on Samsung India’s website right now which says that “sale starts 22nd May 2018.”

It’s unclear as yet when Samsung will bring the handset to other markets across the globe and how much it will be charging for it.