It’s only a matter of time now before Samsung officially announces the Galaxy J4. We saw the first live images of this new mid-range handset just yesterday and the first firmware for the Galaxy J4 is already available for download as well. Now, the official Galaxy J4 user manual has surfaced online and it reveals some details about the handset.

The official user manual for the Galaxy J4 (SM-J400F) confirms that unlike the upcoming Galaxy J6, this handset won’t have an Infinity Display so it’s going to feature a physical home button. It’s going to have a front-facing flash, though.

Since it doesn’t have a metal unibody design, the back cover can be removed to access the removable battery. Bixby is going to be onboard as well but the experience will be limited to Bixby Home and Reminder. You won’t get the Bixby Voice assistant as that remains limited to Samsung’s flagship smartphones.

What the user manual doesn’t do is confirm the specifications of this handset. What we have learned from previous reports is that the Galaxy J4 will be powered by an Exynos 7570 processor with 2GB of RAM and 32/64GB internal storage options. It’s also going to feature a 5.5-inch display and will ship with Android 8.0 Oreo out of the box.

Samsung is yet to confirm when it’s going to launch the Galaxy J4 officially but it appears that the company will be making an official announcement in that regard sooner rather than later. We came across the handset’s official support pages on Samsung’s websites for India, Philippines and Saudi Arabia which confirmed that these will be some of the markets where the Galaxy J4 will be released.

There’s no word as yet on how much the Galaxy J4 is actually going to cost but given its relatively vanilla specifications, one can expect it to be reasonably priced in the already very competitive mid-range smartphone market. 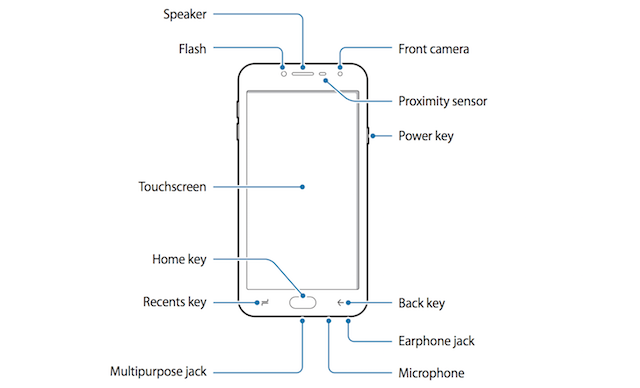