We now have the first Galaxy Note 9 benchmark sighting and if history is any indication, it’s going to be the first of many. The Galaxy Note 9 bearing model number SM-N960U has surfaced on Geekbench where it has revealed its specifications. It’s also the first time that the device has been spotted online with Android 8.1.0 Oreo. When it appeared in the browser benchmark, the device was running Android 8.0.

The benchmark reveals the possibility that the Galaxy Note 9 will ship with 6GB of RAM which won’t be surprising at all given that Samsung is already shipping the Galaxy S9+ with a similar amount of RAM.

As previously mentioned, this is the first time that the Galaxy Note 9 has been spotted with Android 8.1.0 Oreo. It’s expected to ship with this iteration of Oreo and there’s a good chance that it will. Some of you might remember that while the Galaxy S8 came with Android 7.0 last year, the Galaxy Note 8 was running Android 7.1 at launch.

There haven’t been any reports about an early Galaxy Note 9 release so far. We can expect Samsung to stick to the script and not release the new flagship phablet before August/September 2018. It launched the Galaxy Note 8 on August 23, 2017. 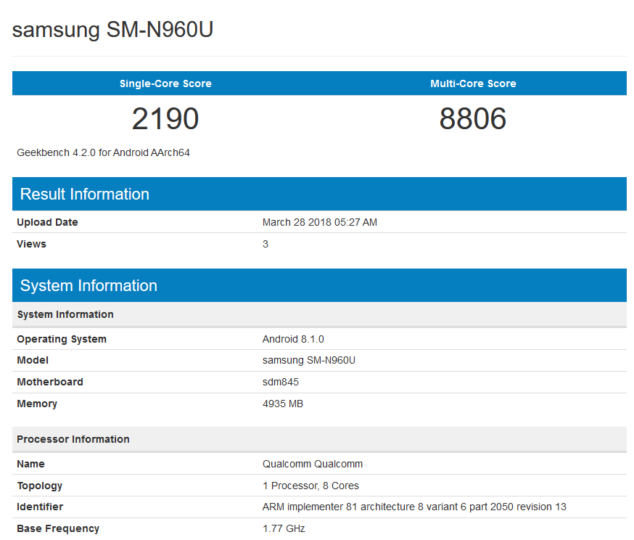