Rumors about Samsung majorly downsizing the bezels on the Galaxy S9 and Galaxy S9+ didn’t pan out, and all we got were slightly narrower bezels above and below the Infinity display on the company’s newest flagships compared to the Galaxy S8 and Galaxy S8+. That’s not to say there aren’t notable design improvements on-board. The S9 and S9+ are more resistant to damage thanks to thicker glass and stronger metal, and the fingerprint sensor is where most people should have no problems reaching.

The Infinity display itself has improved to the point that it can display colors “visually indistinguishable from perfect,” but again, with the bezels remaining nearly the same as the S8 and S8+, there certainly wasn’t any need for Samsung to adopt the iPhone X notch.

Galaxy S9 concept with a notch is beautiful

But those who have wondered how the Galaxy S9 and S9+ might have looked with a notch and virtually no bezels, well, graphic designer Martin Hajek has conjured up some concept images showing such a Galaxy S9. These images are stunning, to say the least, and in addition to putting a notch up top, the concept also envisions bezels thinner than even the iPhone X, thanks to the curves on the side.

Such a design may not be practical, especially with Android’s reliance on on-screen navigation keys for device operation. iOS puts functions such as the back button right inside the UI, with developers getting free reign on where the button can be placed (which messes with uniformity, a long-standing complaint of even iPhone lovers), and the iPhone X works with gestures to make up for the all-screen design.

And, of course, the notch may not be as necessary without something like the iPhone X’s Face ID technology, which allows Apple’s Animoji feature to stay a step ahead of Samsung’s AR Emoji. But again, the images are nice to look at, and you can check out a few of them below. For more of these, hit the source link. Don’t forget to take a look at our Galaxy S9 review. 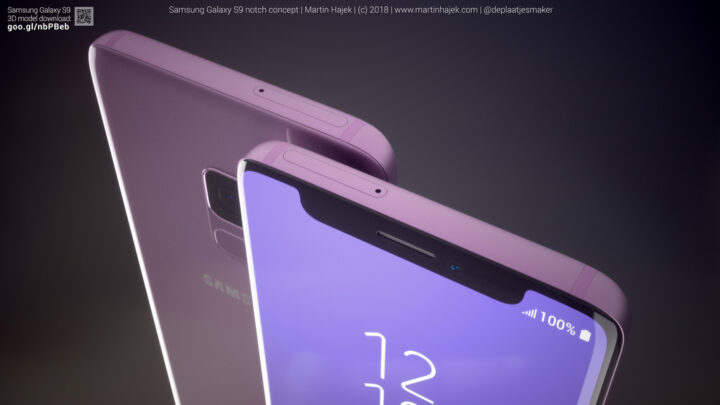