No, the Galaxy S9+ hasn’t surfaced on Geekbench

Last week, we reported that the Galaxy S9 and Galaxy S9+ could enter mass production as soon as next month—and now it would appear that a number of engineers have been armed with prototypes, as a handset, which is believed to be the latter, has been spotted on Geekbench’s online database.

As expected, the listing doesn’t reveal a great deal about the Galaxy S9+, other than that it ships with the Exynos 9810 processor Samsung took the wraps off last week and 4GB of RAM, challenging recent rumors claiming that the firm’s next flagship would be equipped with 6GB of RAM as standard.

We should mention, however, that it’s possible to falsify benchmark results—and that’s exactly what’s happened here. How do we know? Because the trickster in question wasn’t able to alter the Processor Identifier, which resembles the SoC used on the likes of the Galaxy Note 5 and Galaxy S6. 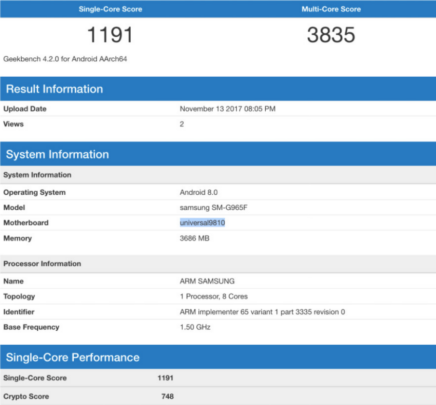