After launching its high-end tablet at MWC earlier this year, Samsung has launched the Galaxy Tab S3 today in India. It is priced at INR 47,990 (approx. $747), and will be available through online and offline stores starting today. The company is offering an easy EMI option and one-time screen replacement for free (valid till July 31). It has partnered with Reliance Jio to offer double the cellular data (28GB +28GB) for just INR 309 (approx. $5) per month. You can buy it on Amazon here; other retailers should have it in stock in the near future.

The Galaxy Tab S3 succeeds last year’s Galaxy Tab S2, and comes with a better display, faster processor, an improved S Pen stylus, better cameras, and improved audio experience. The tablet features a 9.7-inch Super AMOLED display with HDR and an aspect ratio of 4:3. It also comes with a quad stereo loudspeaker arrangement tuned by AKG/HARMAN for improved audio. The tablet runs Android 7.0 Nougat out of the box with the latest version of TouchWiz.

Under the hood, the Tab S3 is equipped with a Snapdragon 820 processor, 4GB RAM, 32GB storage, a microSD card slot, and a 6,000 mAh battery. The tablet also comes with a fingerprint reader. Connectivity options include LTE, GPS (with A-GPS and GLONASS), dual-band gigabit Wi-Fi, Wi-Fi Direct, Bluetooth 4.2, USB 3.1 Type-C port, and a 3.5mm headphone jack. The company has also launched the Book Cover (INR 2,999) and the Keyboard Cover (INR 8,499) accessories. 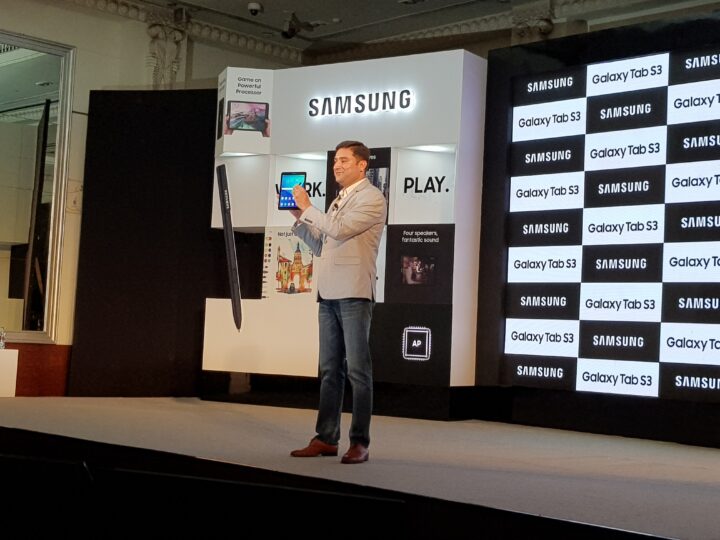