Hands-on with the Samsung Galaxy Tab S3: Taking the next step in premium tablet design

Two years ago, Samsung announced the Galaxy Tab S series, bringing an AMOLED display to the company’s tablet lineup after a long hiatus. The Galaxy Tab S came in two distinct sizes (8.4 and 10.5 inches), and the second-generation Tab S made the switch to a 4:3 aspect ratio and felt a lot more premium than its predecessor, thanks to the metal frame around the sides.

This year, Samsung is trying to make the third-generation Tab S, the Galaxy Tab S3, even more premium. Not just in terms of exterior design, but also on the software front. Samsung gave SamMobile the opportunity to test the Tab S3 ahead of the official announcement, and here’s what we think of the company’s newest AMOLED-toting Android tablet.

In terms of design, the main focus for Samsung was to improve the Galaxy Tab S2 from last year and take the next step in premium tablet design. Because of this, the Galaxy Tab S3 comes with the glass back that is also found on Galaxy smartphones, giving it a very premium feel. With this move, Samsung has managed to come up with a welcome follow-up of the Tab S2. The Galaxy Tab S3 features signature design, a premium entertainment experience and an enhanced S Pen (included in the package). The Tab S3 is the first time Samsung is including an S Pen on one of its S lineups, but not the first time the company has bundled the stylus with a tablet.

The full glass back and metal frame have been built on premium Galaxy technology, and make the device feel a lot more expensive when compared to the Tab S2. However, the glass also means that the back of the device attracts a lot of fingerprints and makes it a bit more slippery compared to regular tablets. The Galaxy Tab S3 features HDR video streaming support for a cinema-like viewing experience with 4K video playback. The Tab S3 is the first tablet from Samsung to feature a Super AMOLED display with support for HDR videos (the Galaxy Note 7 was the first smartphone); the device also comes with Samsung’s mDNIe (mobile Digital Natural Image engine) technology, which has been part of the lineup since the original Galaxy Tab S. As with all of Samsung’s AMOLED displays, this one has vivid colors and great viewing angles.

It’s just an amazing display overall, and the addition of HDR should make it a great choice for media consumption. However, Samsung isn’t offering an 8-inch model this time around, so the 9.7-inch display is what you will have to live with if you choose to buy the Tab S3.

The Galaxy Tab S3 is based on Android 7.0 Nougat with the February security patch. This is the same user interface that is found on the Galaxy S7 and Galaxy S7 edge. The tablet is powered by the Snapdragon 820 processor with support for Vulkan APIs, meaning it is optimized for gaming and comes with Samsung’s Game Launcher and Game Tools services pre-installed. The optimization should theoretically provide twice the FPS (frames per second) in games with reduced power consumption.

The built-in storage on the Tab S3 is 32GB, just like last year’s model. There is a microSD slot with support for up to 256GB cards. There’s 4GB of RAM here, with all the multitasking features we know from Samsung devices, including Multi Window support. 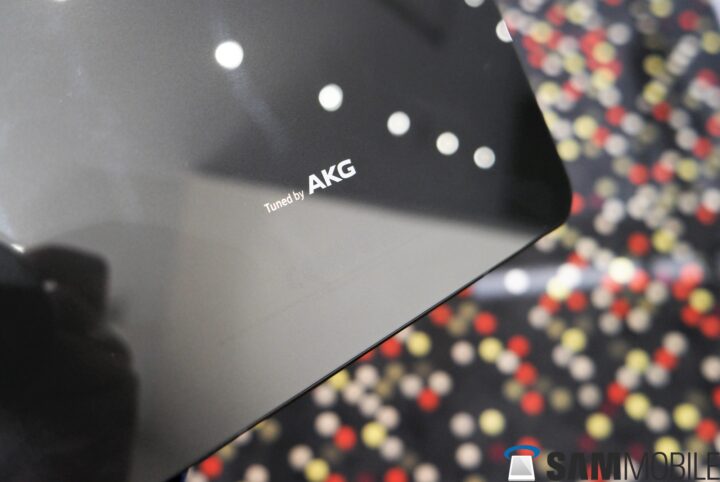 The Galaxy Tab S3 is the first Samsung tablet to feature four speakers (0.64W), and they happen to be tuned by AKG (a Harman subsidiary) for a premium audio experience. These speakers are located at the top and bottom of the tablet, and their audio output will rotate based on how the device is held. Samsung seems to be very confident of the AKG tuning, as the tablet comes with the words “Tuned by AKG” at the back. It’s great to see Samsung isn’t waiting around for its Harman acquisition to be completed before offering an enhanced audio experience on its devices, something that has been lacking for some time.

Optional accessories for the Tab S3 include a book cover and a keyboard cover. Both are connected via the magnetic connector on the bottom of the tablet, so there are no more holes on the back for connecting the book cover, as was the case with the Tab S2. The connector provides both connectivity (so no Bluetooth or NFC is required) and power (which means the keyboard will not have to be charged separately). The keyboard has a 1.5 mm stroke (key travel), which is a huge improvement over older tablet keyboards; the keyboard pitch (distance between two keys) has also been enlarged to make the typing experience a lot more pleasant.

Besides the accessories, the Tab S3 is loaded with all the connectivity options you would expect from a flagship tablet built on the Galaxy foundation, including high-speed wireless (Wi-Fi and LTE) and fast charging via USB 3.1 for the 6,000 mAh battery.

The Tab S3 is a premium tablet that slots in well with the premium phones Samsung has been making for the last couple of years. The quad-stereo sound system is a nice innovation in collaboration with AKG, and during our hands-on, it seems to work very well. Not having to charge the (optional) keyboard and not having to pair it using either Bluetooth or NFC are a nice plus. The HDR display is just the icing on the cake, at least when it comes to the entertainment aspect of the device.

However, we did expect the Tab S3 to be waterproof, although it’s not an important feature for a tablet. The glass back makes the device about 50 grams heavier than the Tab S2, and also makes it a bit more slippery and prone to fingerprints. The screen aspect ratio is still 4:3, while we prefer 16:9 for multimedia viewing (who doesn’t?). Last but not the least, the pricing of the tablet is set to be very high, with the Wi-Fi variant to be priced at Euro 679.

Our full review of the Galaxy Tab S3 will offer a detailed look at what makes the tablet tick and what makes it a poor proposition. What do you think about the Galaxy Tab S3? Could it be your next tablet, or are tablets something you think are no longer worth spending money on? Do let us know in the comments below and by leaving a vote in this poll!