The Galaxy S8 and the Galaxy S8 Plus, which are to be officially unveiled on March 29, have appeared on AnTuTu benchmark’s database. Specifications of both Exynos and Snapdragon variants of these upcoming smartphones have been revealed, as a result.

The Galaxy S8 (SM-G950F) appears to be running Android 7.0 and featuring the Exynos 8895 processor, a 12-megapixel primary camera, an 8-megapixel secondary camera, 4GB RAM, and 64GB internal storage. The SM-G9500 appears to be a Snapdragon 835-equipped variant with an Adreno 540 GPU.

The Galaxy S8 Plus (SM-G955F) has the same specifications as the Galaxy S8 (SM-G950F), including the Exynos 8895 chipset. The SM-G955U appears to be a Snapdragon 835 variant of the Galaxy S8 Plus. Samsung seems to have settled for Full HD+ resolution as the default one for its upcoming phones.

As per previous leaks and reports, the front-facing cameras in the phones would reportedly feature autofocus mechanism, a first in any Samsung smartphone. The upcoming phones might also be able to shoot 1000fps slow-motion videos using the rear-facing cameras (which might also feature laser autofocus). 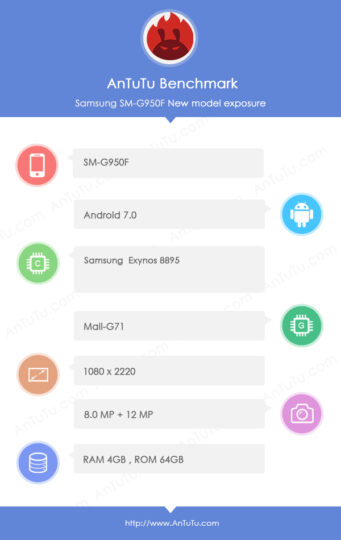