We’ve seen quite a few rumors about the upcoming device in the Galaxy Note lineup including the one which suggested that it would be the Galaxy Note 7. Now, we’ve received information suggesting that the Galaxy Note 7 with a curved edge screen would be unveiled at the next Galaxy Unpacked 2016 event.

According to an image that we’ve received, Samsung might unveil either the Galaxy Note7 or Galaxy Note7 edge on August 2, 2016, at the Alice Tully Hall, Lincoln Center in New York. As you can see in the image, five curved lines might be pointing towards ‘7’ the Galaxy Note7’s name and “The next edge is just around the corner” phrase suggests that it could be the Galaxy Note7 edge. This would bring its numbering in sync with the Galaxy S7 and S7 edge.

We expect that only one Galaxy Note handset will be unveiled by Samsung this August. The upcoming flagship is rumored to feature a 5.8-inch QHD curved edge display, a Snapdragon 823 SoC or an equivalent Exynos chipset, an iris scanner, IP68-certified water-resistant body, a USB Type-C port, and a 4,000 mAh battery. We also exclusively reported that the Galaxy Note 7 would come with a BlackBerry Hub-like Samsung Focus app for enhanced productivity. 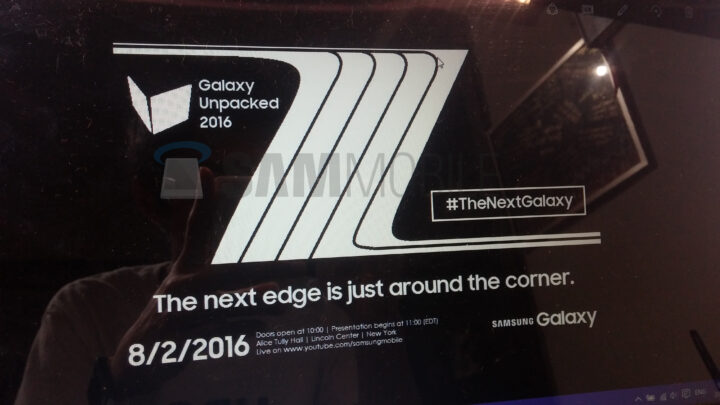 Thanks for the tip, Jehezkiel E.!