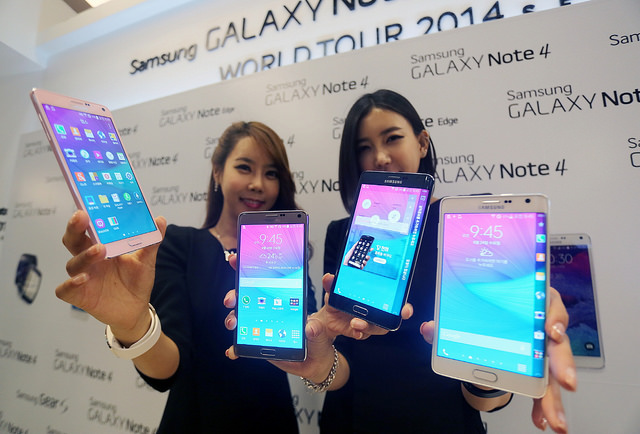 We’ve heard from some of our sources that Samsung might release only one variant of the Galaxy Note 5 this time, unlike last year. It could feature a 2K or a 4K flat-screen Super AMOLED display, an Exynos 7422 processor, and the company’s homegrown modem, which it is apparently very confident of at the moment. The Exynos 7422 is expected to be the company’s first ever all-in-one solution (ePoP) as it will combine the CPU, GPU, RAM, storage, and modem on a single chip. The Galaxy Alpha also had a similar solution inside, but it only combined the RAM and storage in a single package at the time.

According to our insider, Samsung is also testing some Galaxy Note 5 units with a new Exynos 7430 chipset, but this chip is supposedly just an engineering sample and the company currently has no plans to release it for consumers. It’s likely the Exynos 7430 isn’t ready for prime time yet. The same goes for the display — the company is said to be working on different prototypes, some with a 2K display and some with a 4K display, but it is still undecided which of the two will be included in the final version of the device.

Now let’s talk about the smartphone that is expected to replace the Galaxy Note Edge. It is codenamed ‘Project Zen’ internally, and it will not be just a curved screen variant of the Galaxy Note 5 (as was the case with the Galaxy Note 4 and the Galaxy Note Edge) as its hardware internals will not be completely high-end. It is rumored to feature a 5.4-inch/5.5-inch Super AMOLED dual-edge curved display, an S Pen, a hexa-core Snapdragon 808 processor, 16GB storage, a 16-megapixel primary camera with OIS, and an 8-megapixel front-facing camera.

You should to keep in mind that development on these devices is in an early stage and a lot of aspects can change before their official launch. As usual, we will keep you posted if we receive any further information.