When we previewed the Galaxy A70s, we pointed out how the device doesn’t come with the latest version of Samsung’s software on-board, despite having launched after the Galaxy A50s, a lower-end phone with a lower price tag. The Galaxy A70s runs One UI 1.1 out of the box instead of version 1.5 like the Galaxy A50s and Galaxy Note 10, and, as a result, it also lacks some of the new features found on those devices.

However, Samsung is now making amends – the first Galaxy A70s software update is rolling out now, and it adds some of those missing features to the phone. To be more precise, the update adds two features: Link to Windows, and the ability to customize the power key. Link to Windows is not exactly special – all it does is add a quick toggle to the notification shade that lets you quickly connect your phone to your Windows PC via the Microsoft Your Phone Companion app.

However, power key customization is quite useful. On the latest Galaxy devices, including the Galaxy Note 10, you can decide what a double press and a long press of the power button will do. By default, a double press of the power button on Android devices — Galaxy branded or otherwise — launches the camera, but you can customize it to either launch Bixby or any other app that you like. A long press, meanwhile, can be used to fire up Bixby Voice instead of the power off menu, functionality that was initially introduced in Android Pie. The need for it arose from the fact that Samsung is no longer putting a dedicated Bixby key on its flagship devices. Once the power key is assigned to Bixby Voice, the power menu can be accessed via the notification shade.

We should note that while the Galaxy A70s runs One UI 1.1, it did have at least one Galaxy Note 10 feature out of the box: a system-wide screen recorder. Screen recording will become standard functionality on Galaxy devices with Android 10 and One UI 2.0, along with a number of other features. The A70s is eligible for the Android 10 update and should get it sometime after March next year, once Samsung has updated its flagship offerings.

The update does not include latest security patch

Unfortunately, the A70s update bundles the October security patch, not the November patch. It is currently available in India and also adds support for USB Type-C headsets. You can get the update over the air on your Galaxy A70s by going into the Software update menu in the Settings app and tapping Download and install. It’s a 313 MB download and will bump the software version up to A707FDDU1ASI7. 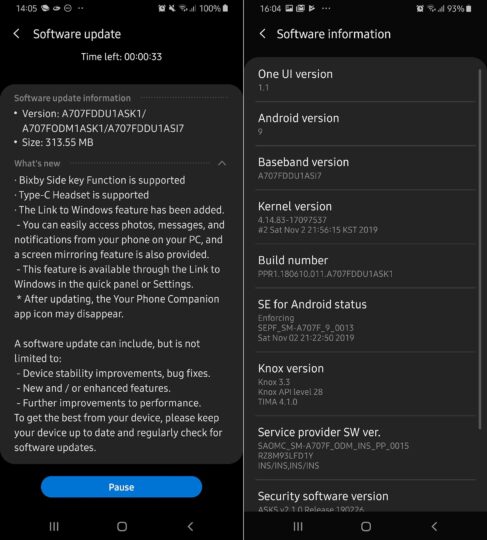