The Galaxy A31 (SM-A315F) has been spotted in the Geekbench database earlier today, where the usual set of hardware specifications have been revealed, ranging from the OS version to the chipset and RAM. Interestingly enough, the Galaxy A31, as per the benchmark entry, is powered not by an Exynos chipset but by a solution supplied by MediaTek.

A few months ago we came across reports suggesting that some models in Samsung’s Galaxy A (2020) series could employ MediaTek’s high-end 5G solution. This may or may not become reality to an extent, but either way, this isn’t the case as far as the SM-A315F is concerned. According to Geekbench, the Galaxy A31 does feature a MediaTek chipset, namely the MT6768V/CA, or Helio P65, but this isn’t a 5G-enabled silicon. Its standard connectivity capabilities are limited to LTE.

Synthetic performance is similar to the Galaxy A51

When it comes to benchmark scores, it’s better to disregard them whenever they represent an unreleased device. In other words, the Geekbench scores for the MediaTek-powered Galaxy A31 are not necessarily indicative of the final product. Nevertheless, we do get a rough idea of where the device is positioned on the performance charts, and the SM-A315F tops a preliminary score that’s right on par with the Galaxy A51 and its Exynos 9611 SoC.

Other details revealed by Geekbench include Android 10, which is to be expected given Samsung’s dedication to launching every one of its new devices with the latest Android OS version out of the box. The Galaxy A31 also appears to have 4GB of RAM, but there’s always the chance that a second variant with more RAM is in development.

In previous news, we’ve discussed how the Galaxy A31 might feature 64GB and 128GB of storage, a 5,000mAh battery, and a 48-megapixel main camera coupled with a 5-megapixel macro shooter. The Galaxy A31 was recently approved by the Wi-Fi Alliance, and while this is no guarantee of an imminent release, Samsung should be bringing the device to the market relatively soon.

And as a quick reminder, the Galaxy A41 is another upcoming device that’s expected to employ the same MediaTek Helio P65 chipset instead of an in-house Exynos solution. 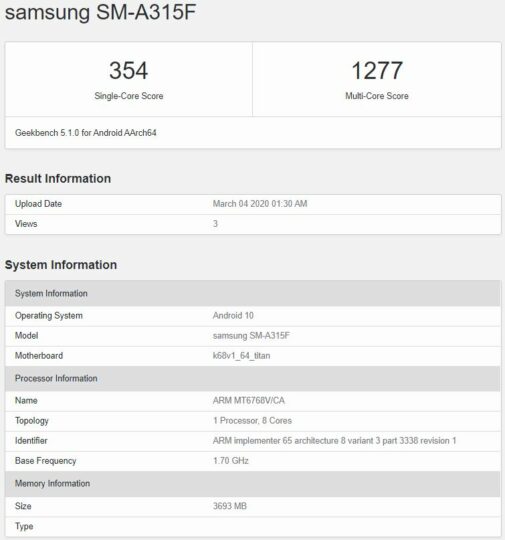