Galaxy A41 to be powered by MediaTek Helio P65 processor The Galaxy A41, one of the many 2020 A series phones Samsung is working on right now, has popped up on the Geekbench benchmark database. The benchmark reveals that the A41 is powered by a MediaTek processor, the Helio P65 to be precise. Samsung has partnered with MediaTek every now and then, and it seems the company is doing it again this year. Rumors also say Samsung could use MediaTek’s 5G chip on some of its 2020 Galaxy A smartphones, though that is likely to be reserved for higher-end devices.

The MediaTek Helio P65 has pretty good specs, such as two Cortex-A75 performance cores and six Cortex-A55 efficiency cores, but since it’s built on a 12nm process, it probably isn’t as efficient as the 10nm Exynos 9611 that we find on the Galaxy A51 (read our review here) and will see on upcoming devices like the Galaxy M31. The presence of the MediaTek chip on the Galaxy A41 suggests it could be an ODM device, which means it would be made in China by a third-party manufacturer instead of Samsung.

The benchmark reveals the A41 will have 4GB of RAM and run Android 10. Recently, the camera and battery specs for the device had been revealed as well. The A41 is said to have a 48-megapixel primary rear shooter along with a 2-megapixel macro shooter, and a 25MP camera for selfies; it’s unknown how many cameras it will have at the back in total. The battery capacity has more or less been confirmed to be 3,500 mAh, a sizable jump over the 3,100 mAh battery that powers the Galaxy A40. 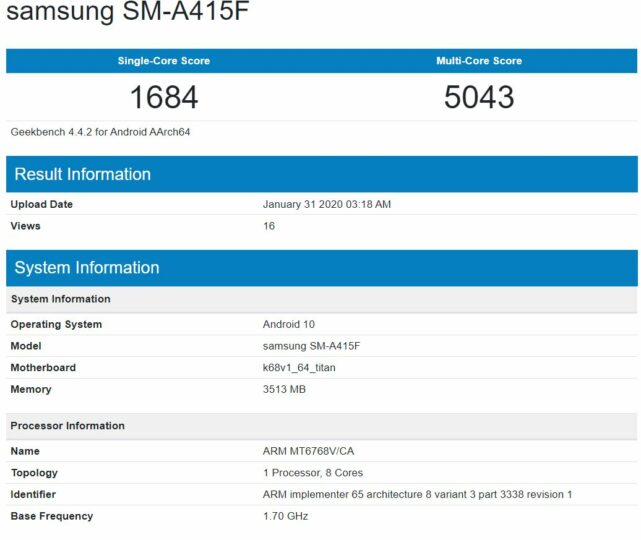