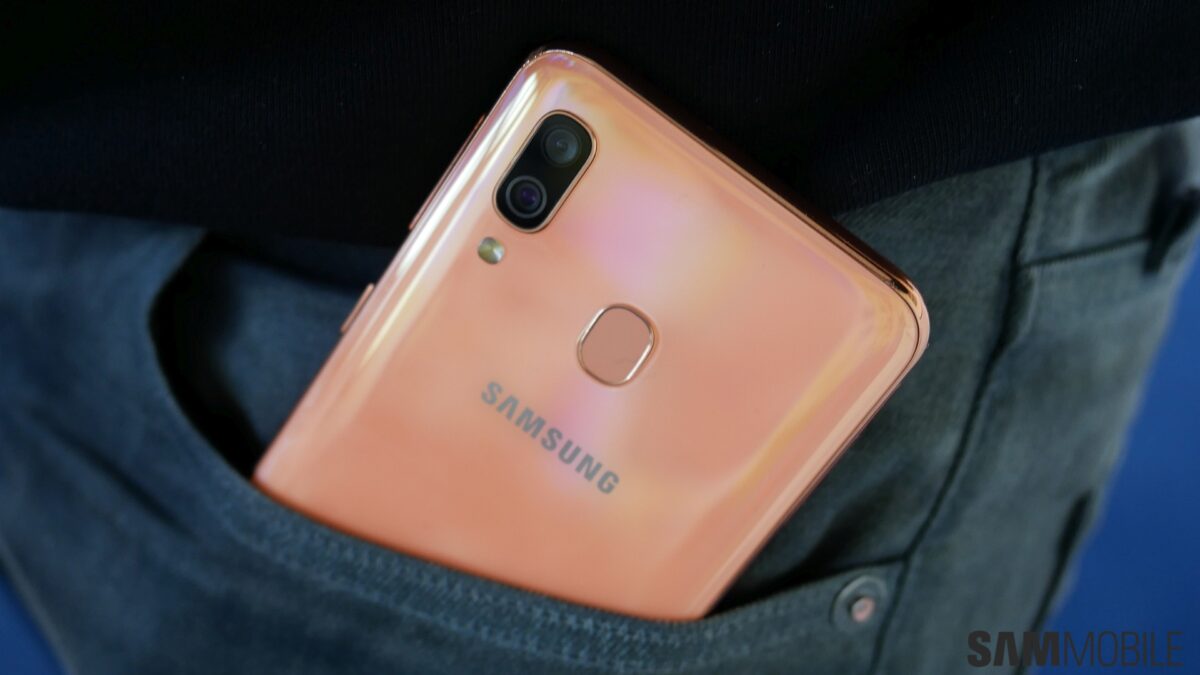 We wouldn’t blame you if you couldn’t recognize exactly which device the Galaxy A40 is. Samsung has launched a flood of devices in the Galaxy A series in 2019, and the A40 was announced somewhere in early April and occupies the lower-end of the new A series lineup. Does it have what it takes to justify its €249.00 price tag? That is what we will find out in this review!

Galaxy A40 review: Design and display 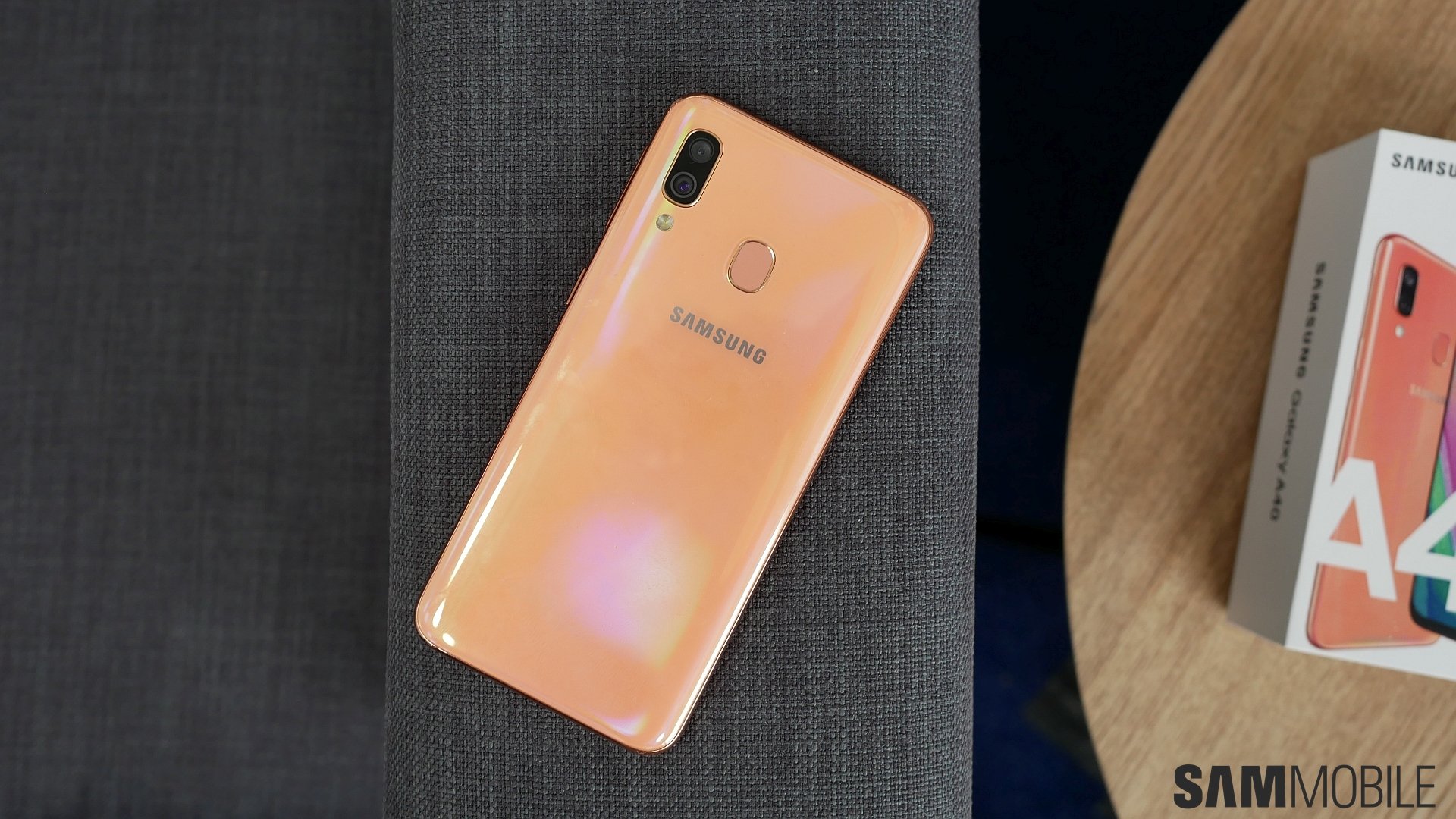 The Galaxy A40 may be one of the cheaper offerings in the 2019 A series lineup, but its design fits right in with the higher-end variants, like the Galaxy A50 or Galaxy A70. You have an all-screen front with a waterdrop notch that holds the selfie camera, and at the back, you have an oval-shaped fingerprint sensor, a dual camera setup at the top left, and the Samsung branding.

The back is made from what Samsung calls “glasstic”, which is plastic that gives off a glass-like vibe. It doesn’t feel very premium but is very smooth. The smooth material makes it rather slippery and the phone fell off the couch a couple of times as a result, so you will want to be careful if you don’t use a case. Our coral review unit is mostly dark orange with pinkish hues on the back and gives off a rainbowish color effect when light hits it at different angles. 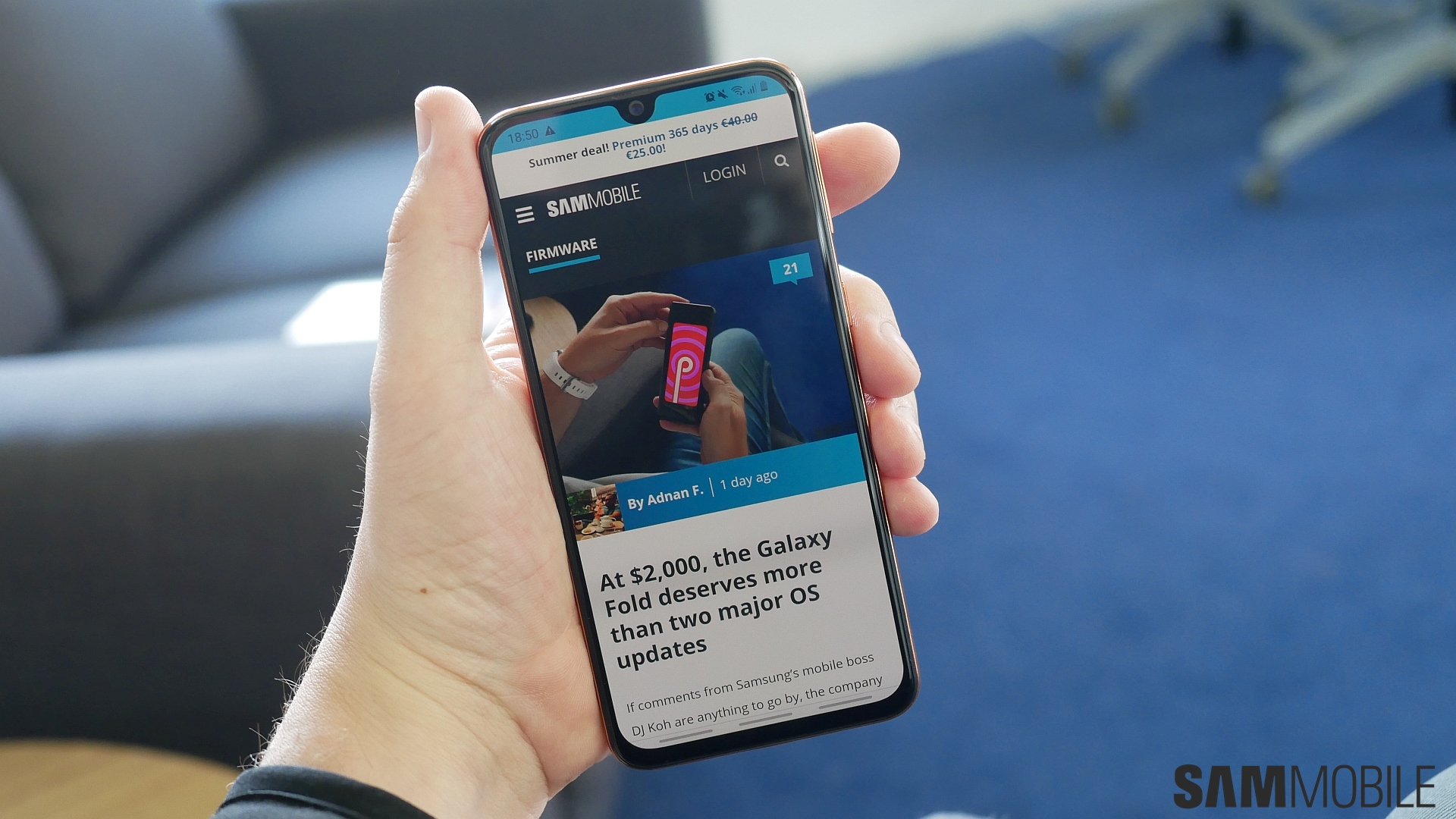 The coral variant has gold edges, and you will find it hard to resist falling in love with it. That said, if you really want your phone to shine, you might want to pick up the black, white, or blue variants, as the coral version’s gradient effect is very subtle. Also, you might want to make sure you don’t scratch the edges of the phone, as it seems the gold hue was sprayed on as an afterthought and you can spot the white material underneath if there’s a sufficiently deep scratch. 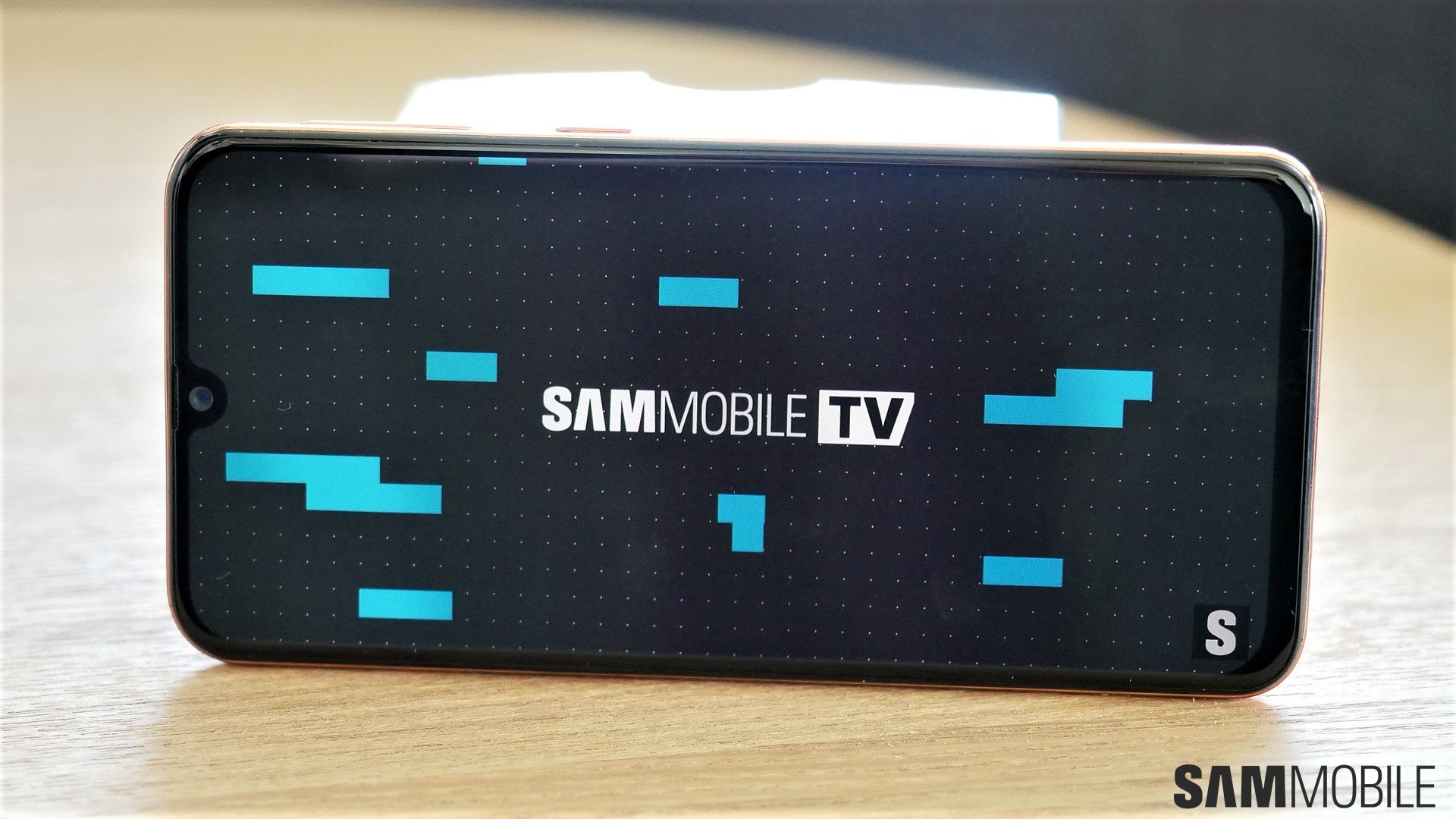 The 5.9-inch Super AMOLED screen is classic Samsung. The company hasn’t made any cuts here – you get vivid colors, deep blacks, wide viewing angles, and high brightness levels. The display resolution is Full HD+ (2340×1080), which makes the screen quite sharp; in fact, it’s considerably sharper than the Galaxy A50, as the A50 has a screen that’s 0.5 inches bigger. And thanks to the waterdrop notch, the bezels are quite narrow, giving the phone a premium look when the screen is on. 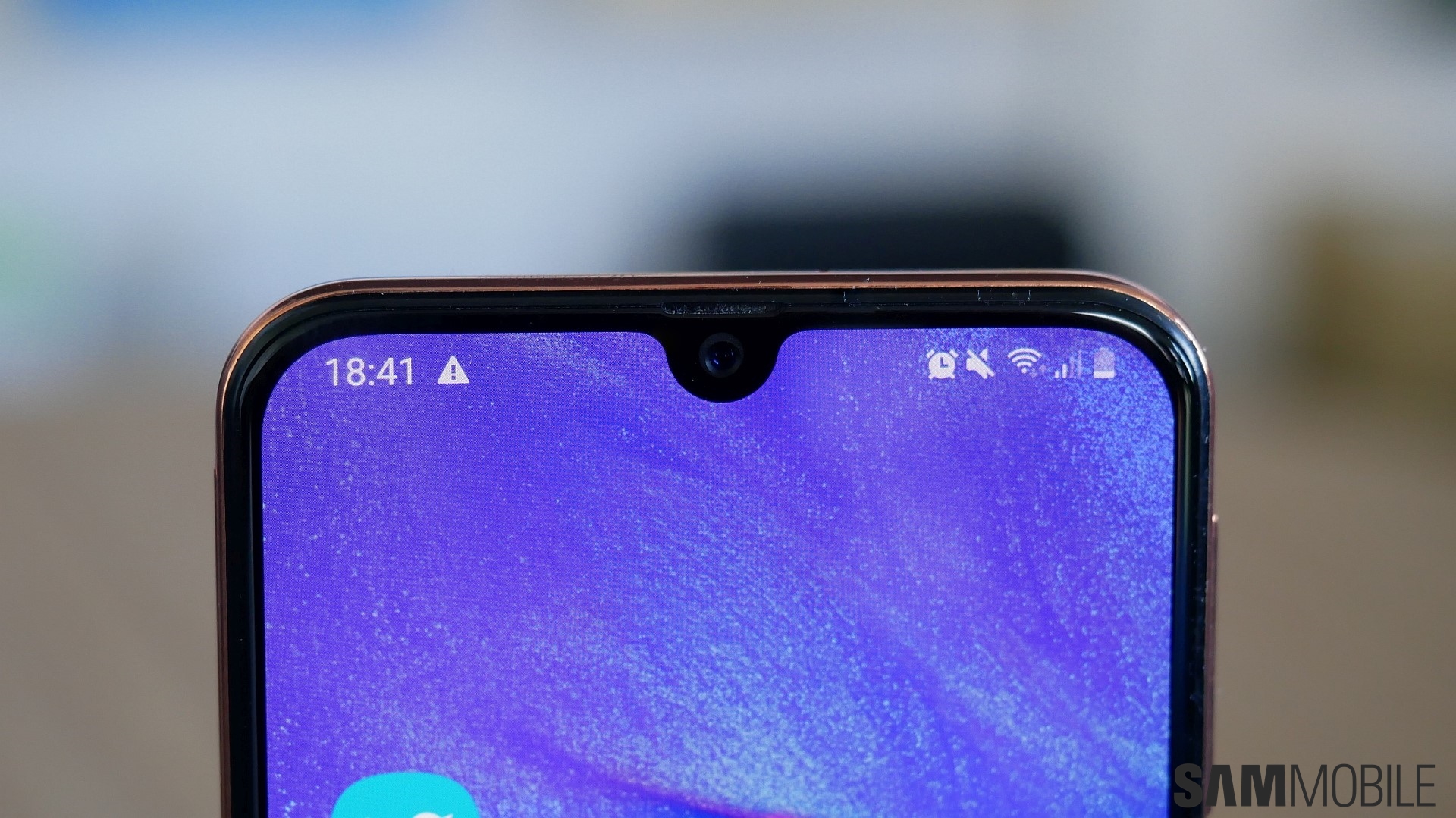 While the slightly more expensive Galaxy A50 has three rear cameras, the Galaxy A40 makes do with two: a 16-megapixel primary camera and a 5-megapixel ultra-wide lens. The pixel count isn’t that high, but to be honest, 16MP is enough for regular pictures. More important than the megapixel count is the aperture, and with F1.7 aperture, the A40 does reasonably well in low-light conditions. And with the ultra-wide camera, you can broaden your view to 123 degrees, which is very useful for photos of landscapes and large groups of people. Ultra-wide photos have a fisheye effect at the edges, but while this can be fixed in the gallery, you can’t do anything about the low resolution of the ultra-wide pictures. 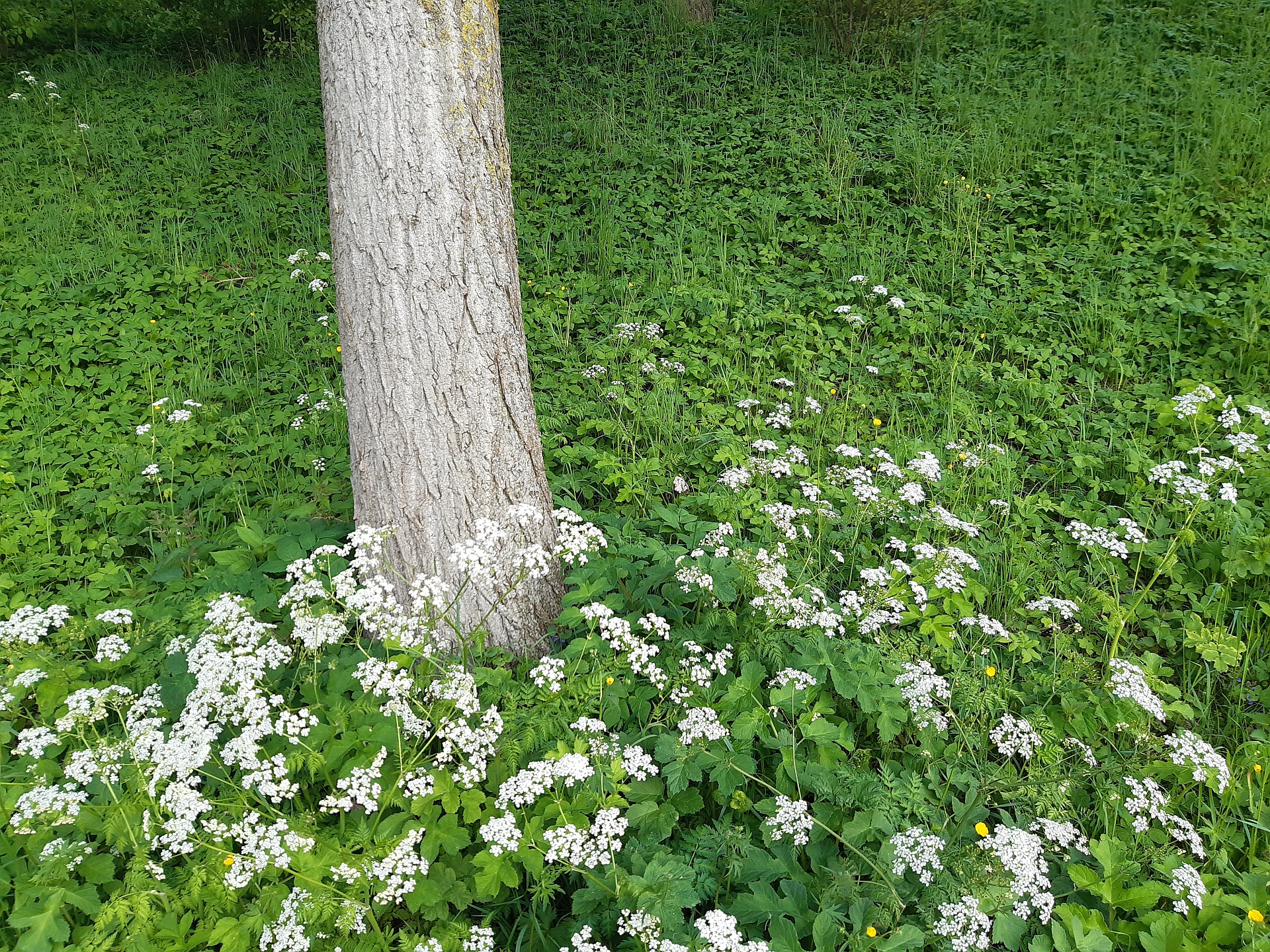 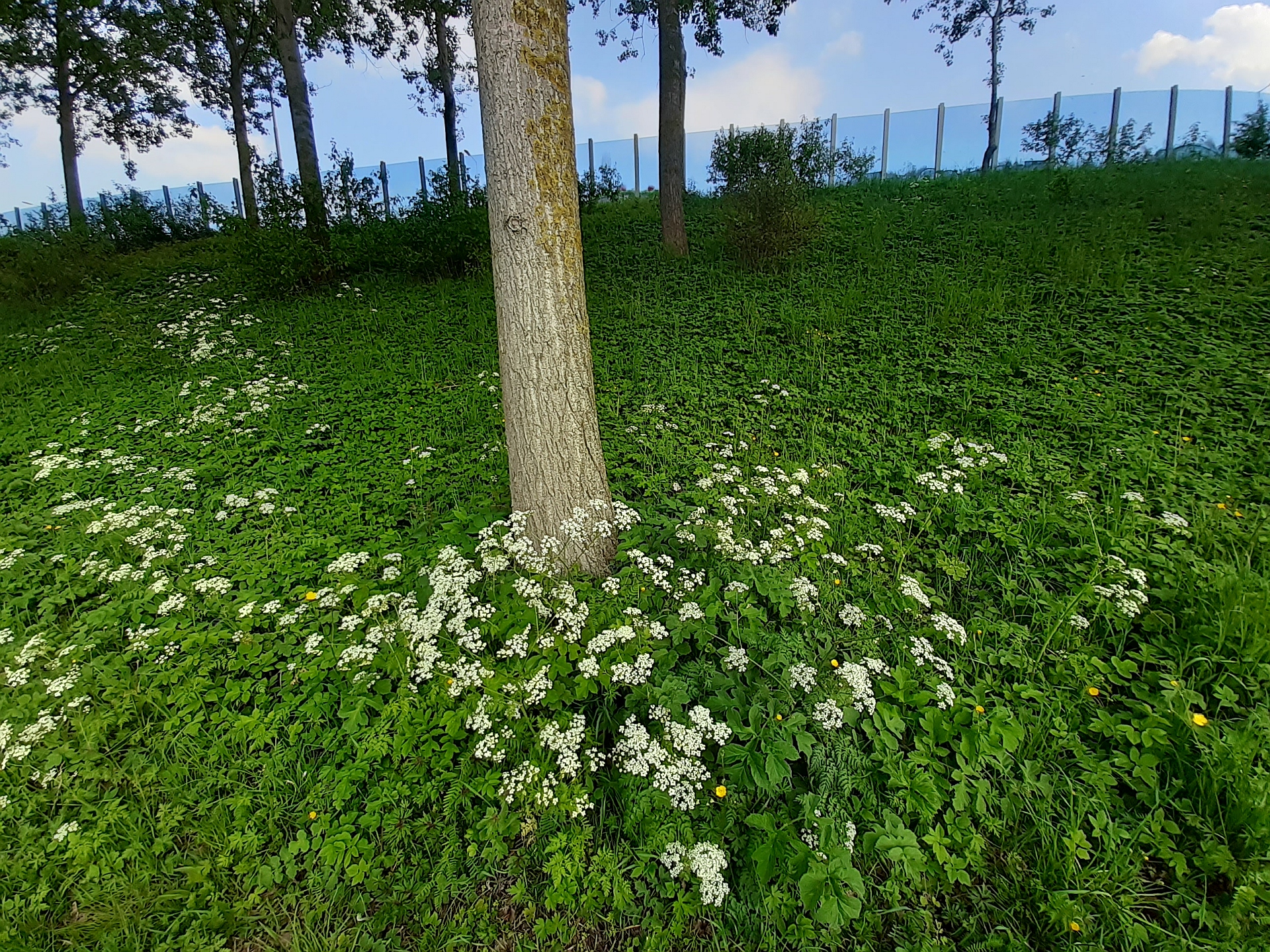 The A40 has a 25-megapixel selfie camera inside the waterdrop notch; that’s more pixels than the rear camera, making the A40 a good option for selfie addicts. With an aperture of F2.0, the selfie camera isn’t that great in low-light situations, but you get fairly detailed selfies in good natural lighting. The front camera doesn’t have a wide-angle lens, but by default, you see a cropped version of yourself and can switch to the full view with a tap of a button, a feature that debuted on the Galaxy S10. You also miss optical image stabilization, so you need a steady hand to shoot images and videos. Is that bad? Well, not if we consider that the Galaxy A40 isn’t targeted at photography enthusiasts. 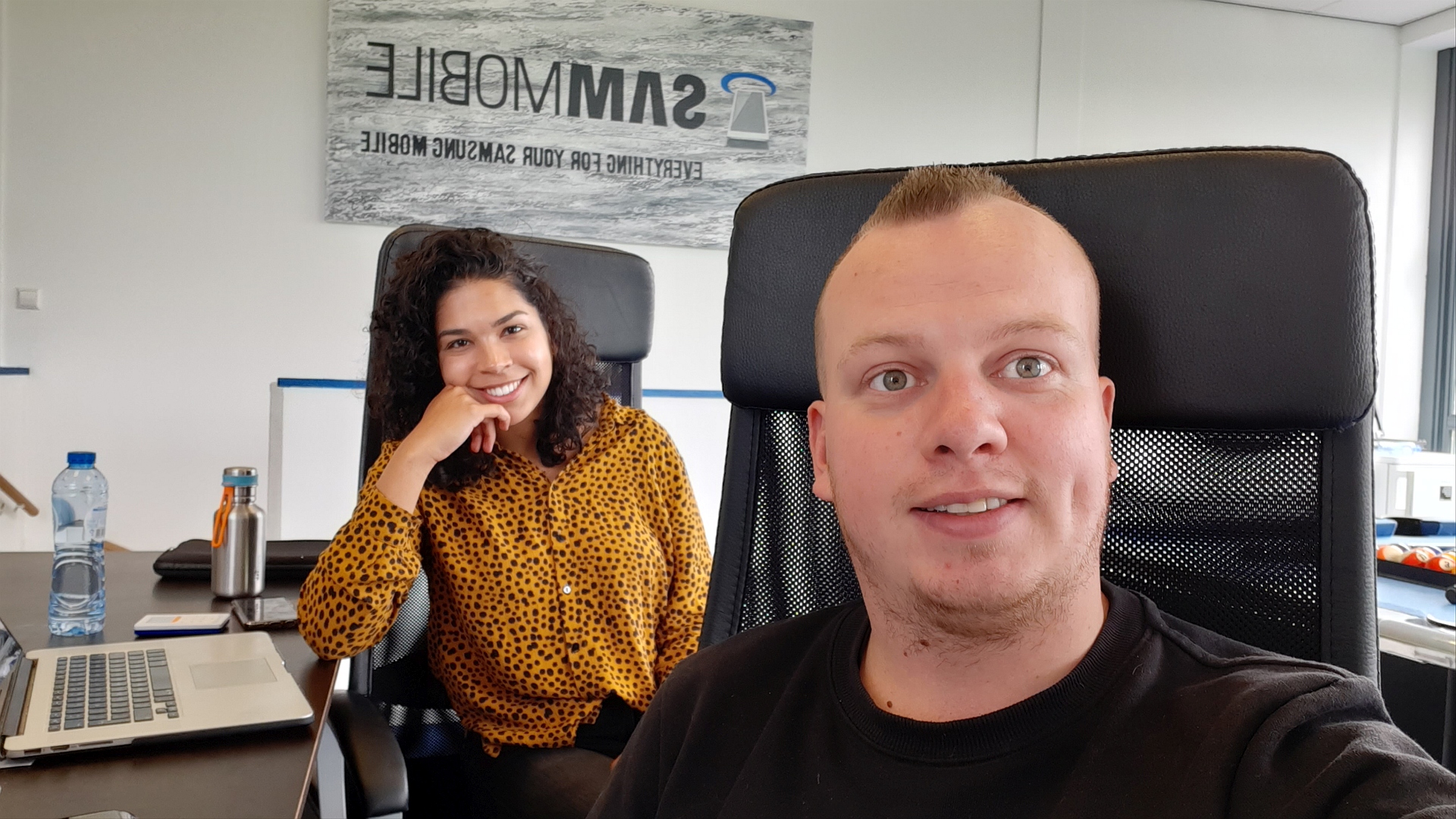 You can take bokeh (Live Focus) photos with the rear and front cameras. You can adjust the level of background blur, but as Live Focus is software-based, you can only take bokeh photos of people with the rear camera. There’s a Pro mode for those who like to tinker with basic settings like ISO value, and there’s also Scene Optimizer, which detects what the camera’s pointing at (like a dog or flowers) and adjusts color settings before taking a photo. You have support for applying filters in photos and videos, and the latter can be shot at Full HD resolution at a maximum of 30 frames per second.

Galaxy A40 performance and software 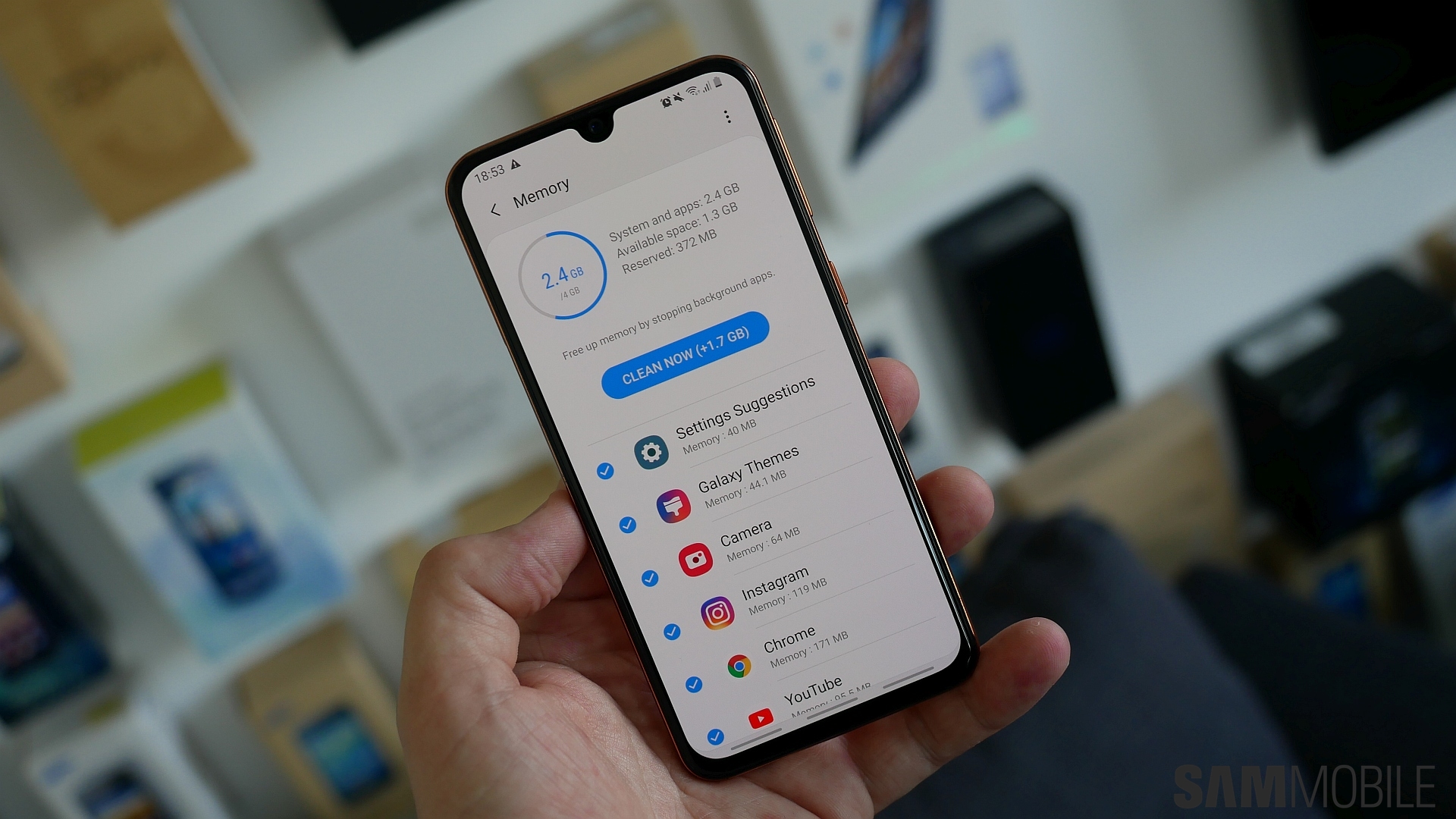 The guts of the Galaxy A40 hold an Exynos 7885 chipset, one of Samsung’s own mid-range offerings, with two Cortex-A73 cores and six Cortex-A53 cores, coupled with the Mali-G71 MP2 GPU. The 7885 debuted on the Galaxy A8 (2018) last year, and after using the Galaxy A40 for a few days, I’m far from impressed. This chipset is slow, and that is obvious in a variety of scenarios. I put it next to a Galaxy A70 and tried opening a few apps on both, and the A40 takes some time to launch apps, especially the camera.

There’s also occasional lag when you switch between apps or are browsing, and I believe 6GB of RAM instead of 4GB may have made things better. When it comes to gaming, you can play titles like PUBG at medium to low settings to get meaningful frame rates. Overall, one can certainly live with the performance of the Galaxy A40, especially if you have low expectations, but I think the device is a disappointment in this regard. 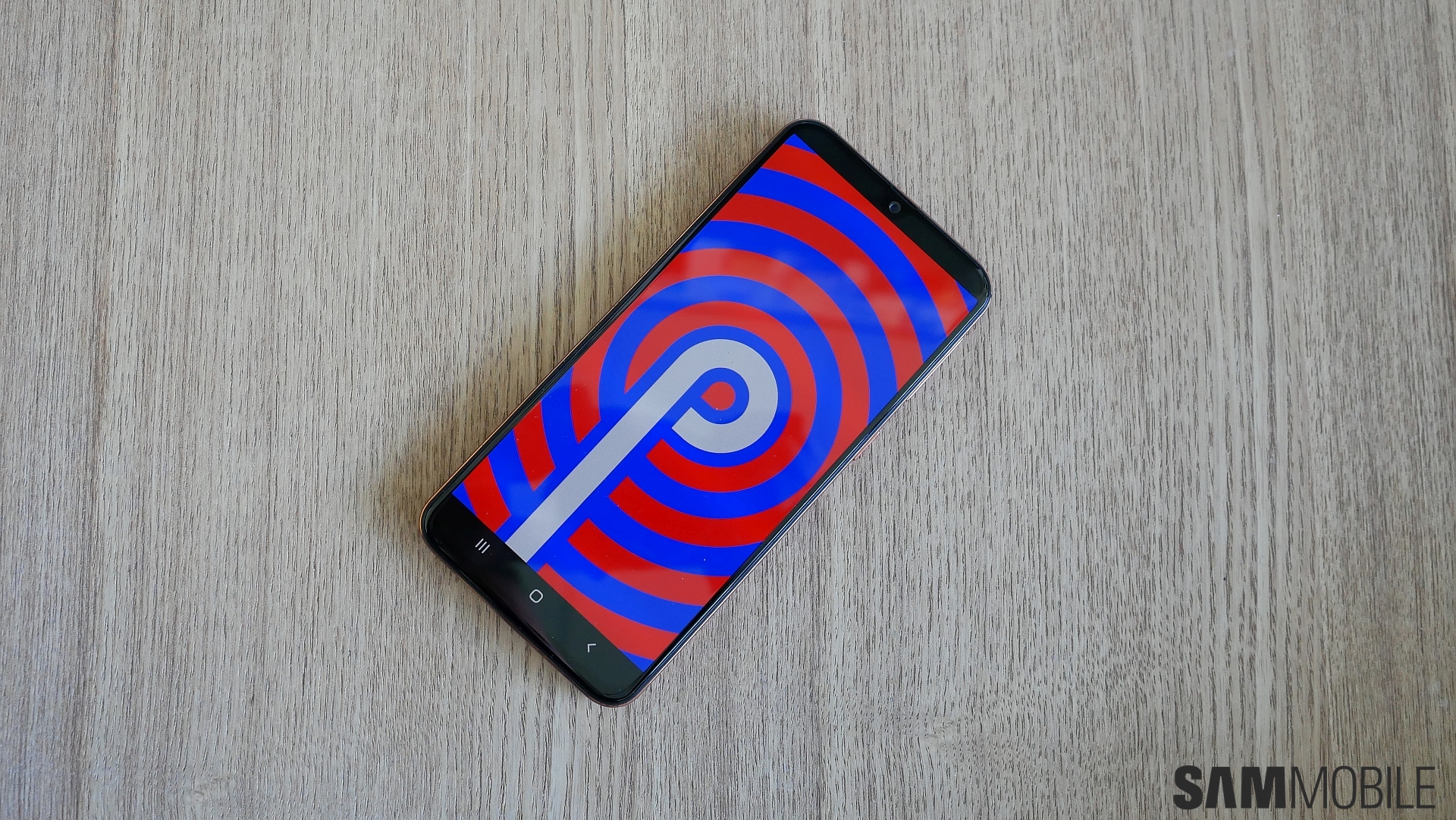 Android Pie with Samsung’s One UI 1.1 interface makes up somewhat for the lacking performance, though. This is the most recent version of the software you find on Galaxy phones; it looks good and is mostly smooth in general operation, although the aforementioned lag will trouble you from time to time. The A40 also lacks features like Bixby Routines and the option to use Bixby Voice using the power key, but one can hope Samsung will add those with a software update, similar to how it brought those features to the Galaxy A50 after launch.

It’s also important to note that this phone doesn’t receive monthly security updates. Security updates come every quarter, but you can expect to get two major Android OS upgrades. It should have Android Q before mid-2020 if we go by Samsung’s pace of rolling out Android Pie to mid-range devices, and Android R should arrive a year after that. 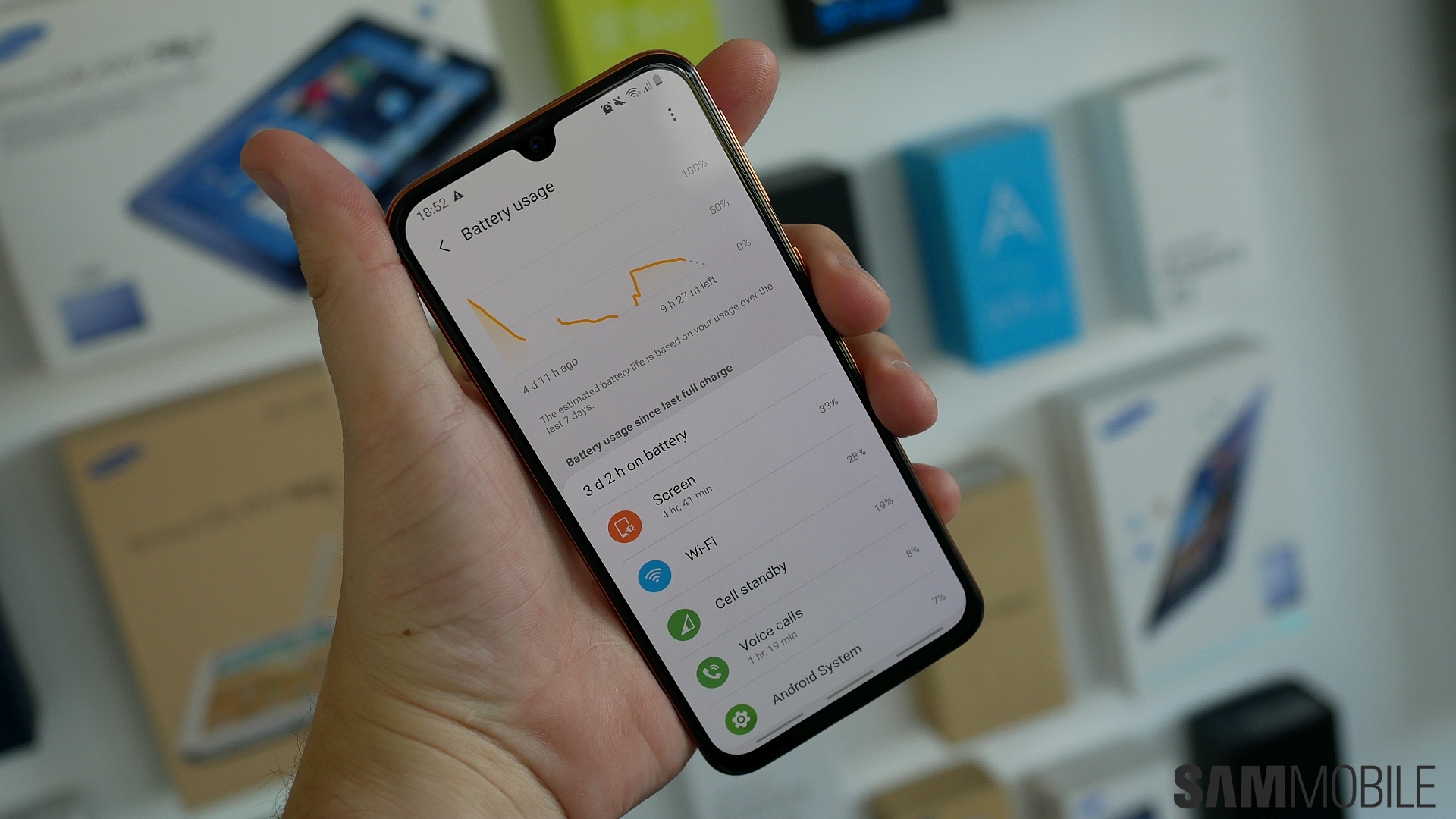 The Galaxy A40 is equipped with a modest 3,100 mAh battery. That’s enough for light to moderately heavy use, but the social media and gaming addicts won’t get through to the end of the day. Using the A40 as a hotspot when away from home required me to charge it by early evening. On the other hand, a small battery means it can also charge quickly; Samsung has thrown in standard 15W fast charging into the mix. And while battery life may not be excellent, I don’t think the A40 is for power users anyway, and they may want to opt for another model if a long-lasting battery is an important requirement.

The Samsung Galaxy A40 is a phone that meets the basic requirements of a smartphone and adds a couple of extra features on top, like an ultra-wide camera. It looks nice but not spectacular, the battery is big enough unless you’re a power user, photos from the cameras are perfectly fine for sharing on social media, and the software is the latest available on Samsung’s Galaxy smartphones but with some useful features missing. And the €249 price tag is fair, but it would be a much easier recommendation at €199.

Samsung may have already released Android 10 for a surprising number of devices, including both flagship ones and those on the budget end of the spectrum, but according to the company’s roadmap, it will still be a few months the slew of Galaxy phones launched this year will get the new version of Android. Except […]

Official Disney-themed cases for the Galaxy S10 and a few other Galaxy devices, like the Galaxy A40, Galaxy A50, and Galaxy A70, have gone on sale in some countries. Samsung has been selling Marvel-themed cases for its devices for some time, and the Disney cases seem to be a new addition. Right now, only two […]

A new Galaxy A40 software update rolling out in Germany brings the July 2019 security patch and Samsung Pay to the compact mid-range smartphone (read our review here). Samsung’s changelog for the update says Samsung Pay has been added to the device in Sweden, Switzerland, Spain, and the United Kingdom, but the update isn’t yet available […]