As the Galaxy A11 keeps dodging the market weeks after its WFA approval, an alleged official render of the device has been leaked and passed along by Android Headlines. The render matches the sketch previously seen in FCC documents, at least from the back, and suggests that the device will sport an Infinity-O display with a corner cutout.

This is unlike Samsung’s more recent mid-range devices such as the Galaxy A51 and Galaxy A71, both of which are equipped with an Infinity-O AMOLED display boasting a centered selfie camera.

The off-center cutout positioned to the left harks back to earlier models like the Galaxy A60 and Galaxy M40, and time will tell if the Galaxy A11 will also sport a TFT screen as those two Galaxy devices do, or if it will switch to AMOLED.

As one of the company’s most budget-friendly devices of 2020 along with the Galaxy A01, the Galaxy A11 could very well stick to TFT technology, much like the A01 does. Rumors claim that the panel will have a 6.2-inch diagonal but this remains subject to change.

The Galaxy A11 could be one of the last Samsung phones to have a 3.5mm jack

Other details include a rear-mounted fingerprint scanner and a triple-camera setup paired with a flash. The side button and volume rocker are located on the right edge of the phone, and the back cover is seemingly made out of plastic. Finally, while it’s difficult to confirm this detail from this render alone, the Galaxy A11 appears to accommodate a 3.5mm headphone jack on the top edge.

The Galaxy A11 should ship with Android 10 out of the box, but it remains to be seen exactly when Samsung will begin shipping the device to prospective buyers. The phone has yet to be unveiled by Samsung but it’s been leaked enough times to have its existence all but officially confirmed. 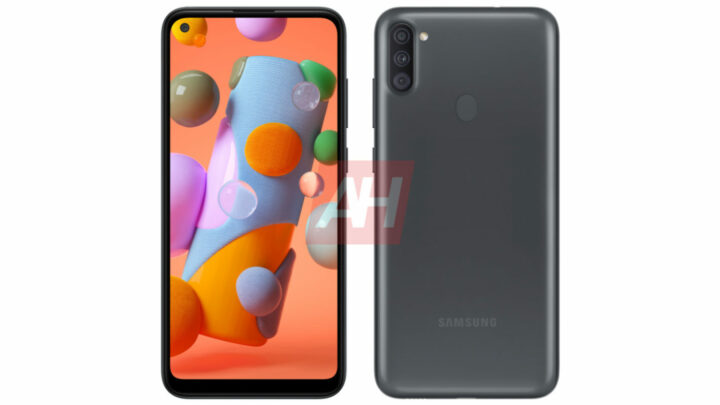 More news »
Here’s when your Galaxy device is scheduled to get One UI 3.0 stable update Asif S.|3 months
Galaxy A12 vs Galaxy A11: Better in every aspect that counts Mihai M.|3 months
Samsung dominated the EMEA smartphone market in Q3 2020 Mihai M.|3 months
Samsung US discounts 5 cheapest Galaxy A phones by $50 Dominik B.|4 months
SamMobile Weekly Giveaway
Best Picks More »
Best Samsung Phones in February 2021 – Picked by experts
3 weeks ago