Samsung’s most budget-oriented smartphones of 2020 – the Galaxy A11 and Galaxy M11 – have one less formality to deal with before they can hit the shelves. They have both been certified by the Wi-Fi Alliance today while carrying the model numbers SM-A115F and SM-M115F.

A couple of months ago we brought you the news about Samsung’s plans to ship the Galaxy A11 with Android 10 out of the box. The WFA approval documents now confirm this to be true for both the Galaxy A11 and the Galaxy M11.

The Wi-Fi Alliance papers don’t reveal new hardware details, as usual, but Samsung fans already have a general idea of what to expect from these devices. After all, they will be the company’s most affordable smartphones of the year, and specs will be appropriate for the segment.

The Galaxy A11 was previously spotted in an online benchmark running the Snapdragon 625/626 chipset coupled with 2GB of RAM and 32GB of built-in storage. Less is known about the Galaxy M11, but it should launch in an exclusive violet color along with the standard black and blue. It should have at least 2GB of RAM and 32GB of storage.

Exact launch dates for the budget Galaxy A11 and M11 remain unknown. The WFA approval might hint at an imminent release, but there’s never a guarantee of it taking place shortly after the documents pop-up online. It’s up to Samsung, but regardless, we’ll keep you posted as soon as we learn more. 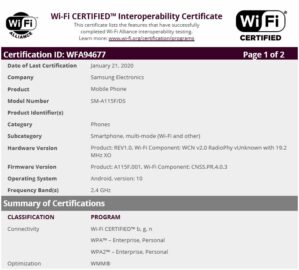 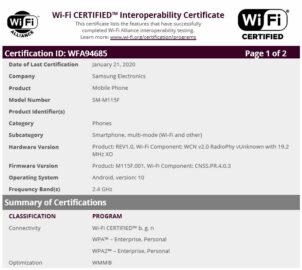