Galaxy A10, Galaxy A30, and Galaxy A50 specs and features leaked

As expected, the Galaxy A10 has the most humble specs here, even missing out on a dual rear camera despite Samsung putting a dual camera setup on the considerably cheap Galaxy M10. The A50 could have a triple-camera setup similar to the Galaxy A7 (2018), with an ultra-wide sensor joining the regular and depth sensors. The A30 will have the Galaxy M20’s rear camera setup and the A10 will have to make do with a single 13MP rear camera. At the front, there’s a 25MP, 16MP, and 5MP camera on the A50, A30, and A10 respectively.

One spec common to these devices seems to be the battery, which is a 4,000 mAh unit and gets fast charging support on the A30 and A50. An in-display fingerprint sensor has been rumored for the Galaxy A50, and it is being reiterated here. The Galaxy A10 won’t have a fingerprint sensor, while the A30 could have its fingerprint reader mounted on the back. What’s interesting here is that the A30 and A50 will apparently get an Infinity-U display, not an Infinity-V display that adorns the Galaxy M10 and Galaxy M20.

Both Infinity-U and Infinity-V display feature small notches at the center, so it looks like the one differentiating factor is that the former is a Super AMOLED panel, as suggested in the leak. As far as sizes are concerned, we’re looking at 6.4-inch Full HD+ displays on the A30 and A50 and a 6.2-inch HD+ display on the A10. Under the hood, the A50 will get the new Exynos 9610 SoC. The A30 and A10 will be powered by the Exynos 7884B and Exynos 7904 chipsets, both of which are spin-offs of the Exynos 7885 that debuted with the Galaxy A8 (2018). 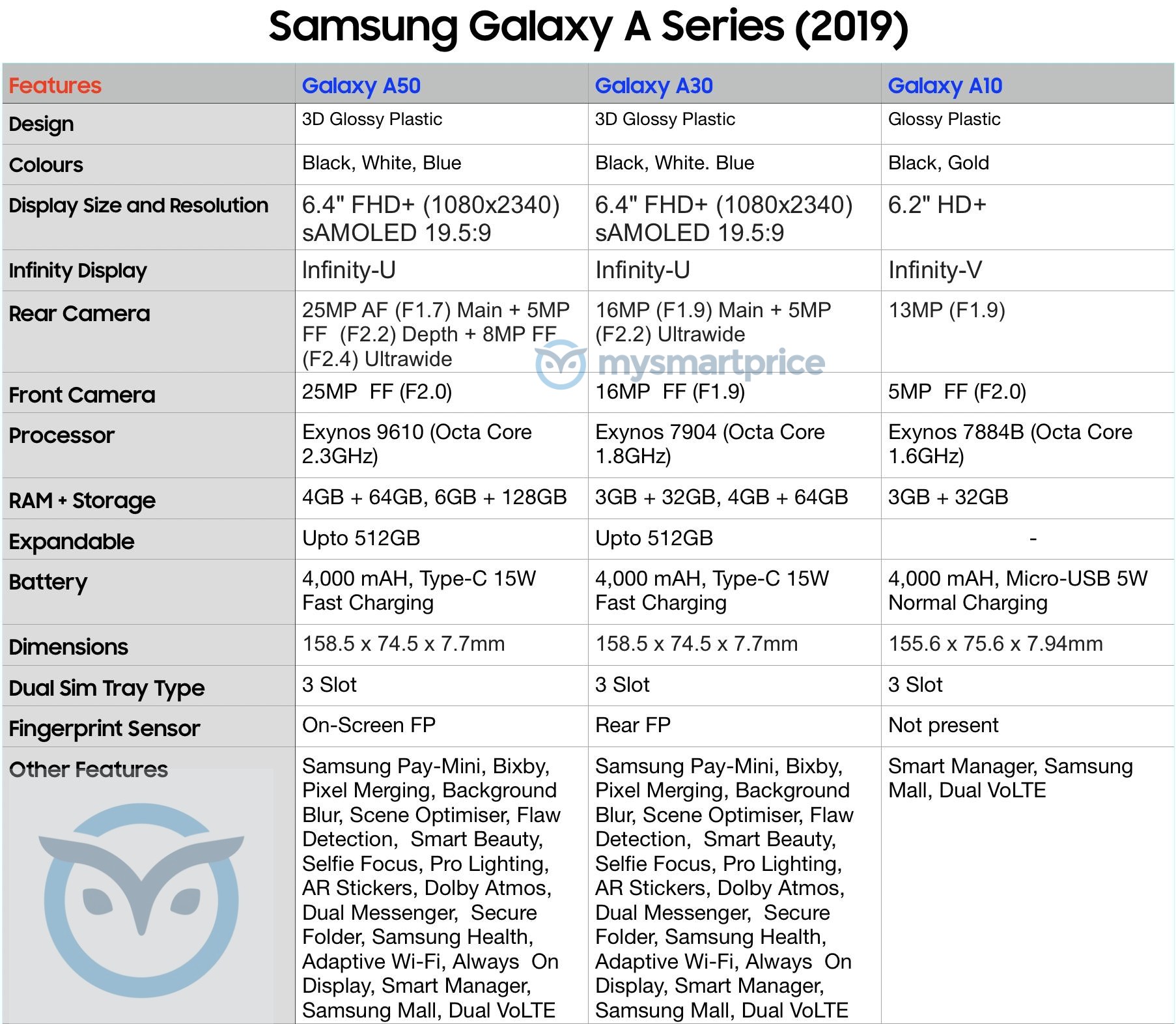 As far as the designs are concerned, it looks like all three phones will be less than 8mm thick, with a “3D glossy back” for the A30 and A50 and a regular glossy back for the A10. As we had exclusively revealed, Samsung could introduce white as a color option with these devices. An interesting thing to note is that the three phones seem to have plastic body, not a glass one like previous Galaxy A series phones. That’s probably a cost-saving measure, and we should see glass on the higher-end new A series phones, like the Galaxy A70 and A90.

Android Pie with Bixby support, but no Samsung Pay

On the software front, it looks like the three phones will have Bixby support, although it remains to be seen if it’s the complete version with a dedicated physical key or just Bixby Home and Reminders (the A10 will probably have the latter only). As the many benchmark appearances have confirmed, these phones will all run Android 9.0 Pie out of the box, so we’ll see them hit retail shelves after the Galaxy S10 has gone on sale.

Like the big Galaxy S10 leak from earlier this week, this one does seems to be rather plausible. Of course, it’s best to keep the proverbial salt container handy with any such leaks until something official comes up.