A major new leak has spilled all the information we could hope to see on the Galaxy S10. GSMArena has published pictures of two sheets that mention the specs and features of the Galaxy S10e, Galaxy S10, and Galaxy S10+, confirming some already known details while offering a slightly different take on others. For example, the Galaxy S10+ is listed with a 6.3-inch display instead of a 6.4-inch display, although this could just be a rounding error as 6.39 inches was the exact rumored size before this.

Or, well, these documents aren’t really accurate or based on actual sources, since there are quite a few errors here, like the Galaxy S10e display resolution listed as 2280×1080 pixels and dubbed QHD+ (the S10 and S10+, meanwhile, are listed with 3040×1440 QHD+ displays). The documents also describe the Infinity-O display as “Dynamic AMOLED HDR+” and mention Gorilla Glass 6 protection. The displays will apparently reach 800 nits of brightness, and ultrasonic in-display fingerprint sensors are mentioned as well.

The documents also list detailed camera specs. You have the same 12MP primary F1.5-2.4 sensor with Dual Pixel autofocus and 12MP F2.4 telephoto lens with OIS as the Galaxy S9+ on the back, with a 123-degree ultra-wide 16MP F2.2 sensor added to the mix. The Galaxy S10e gets only the regular and ultra-wide cameras, which means the smaller model may once again miss out on zooming capabilities. As for front cameras, the S10e and S10 have a 10MP F1.9 sensor, while the S10+ gets a second 8MP sensor for Live Focus pictures. 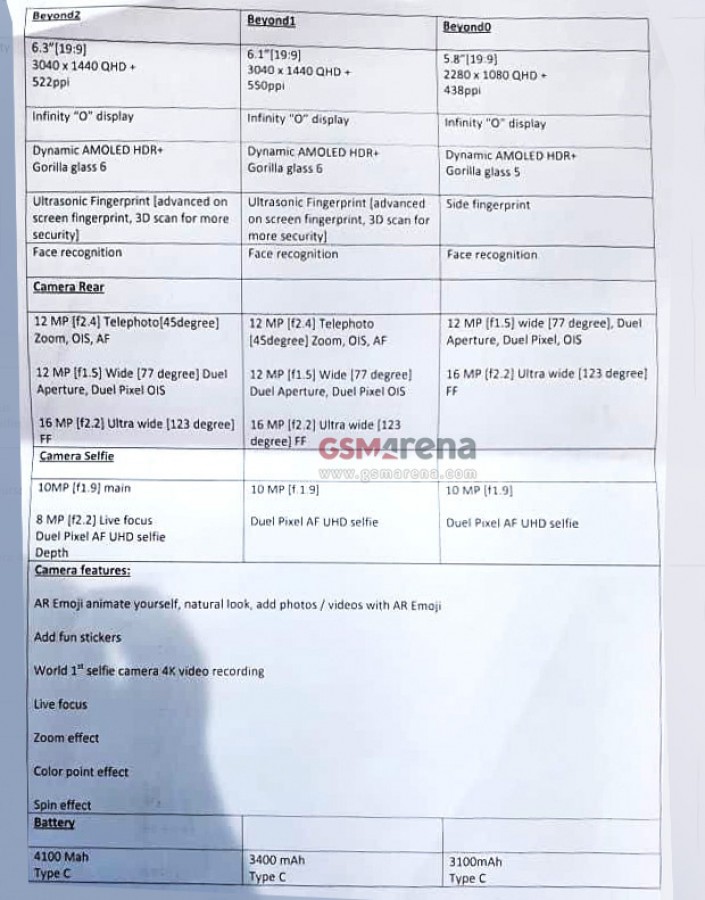 As hinted at by Samsung Vietnam with a teaser video, the Galaxy S10 will let you shoot 4K videos with the selfie camera. Optical image stabilization for the front camera was also teased in the video and rumored earlier, but that’s not listed in the leaked documents. Sadly, there’s no mention of something like Bright Night in the list of camera features, either. But the S10 could let you record Super Slow-mo clips of 0.8-second moments (the S9+ and Note 9 only offer the 0.2-second and 0.4-second options).

There’s more. Battery sizes of the three models are included: 3,100 mAh, 3,400 mAh, and 4,100 mAh for S10e, S10, and S10+ respectively. That extra 100 mAh is because Samsung now has both total capacity and rated capacity mentioned on its batteries, and the latter is what actually matters at the end of the day. Reverse wireless charging is also in there, and so is the 12GB+1TB configuration for the S10+. The ceramic version is only listed with 12GB+1TB, but it’s possible the ceramic model may also come in an 8GB+512GB configuration in some markets.

Last but not the least, the Galaxy S10e is listed with 8GB of RAM and 256GB of storage, which is suspicious since all rumors until now have said the S10e will only come with 6GB of RAM and 128GB of storage. But, again, there is no telling how much of this leak is accurate and how much is just existing info rounded up. We’ll leave you to decide, although it would be better to just hold off from coming to any conclusion before the official Galaxy S10 launch on February 20. 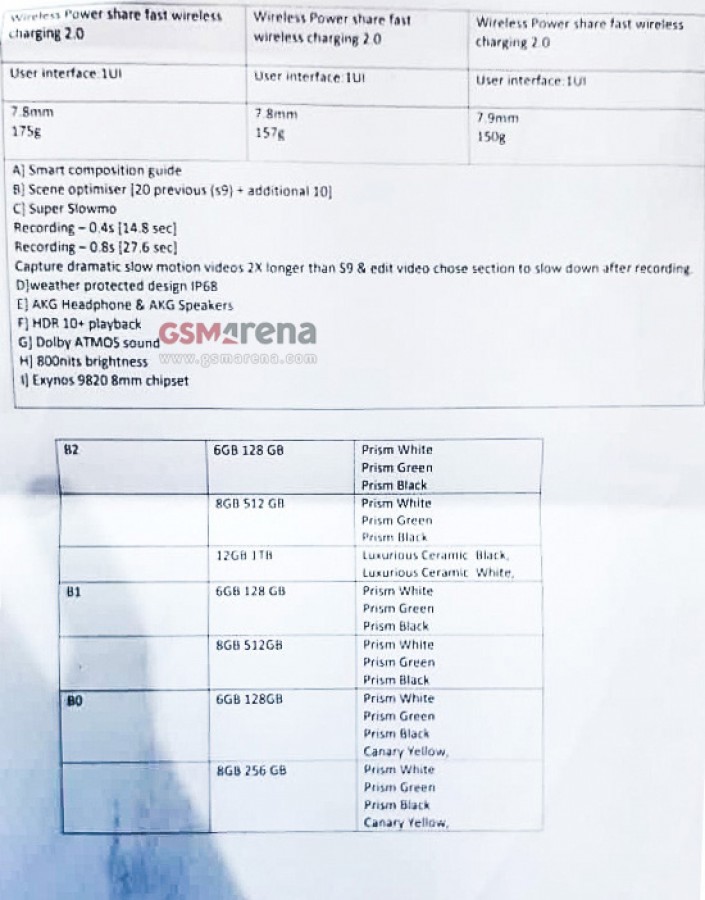