We love the Galaxy Note 5. We think it’s the most complete flagship Samsung has ever made, despite the fact that it takes away a couple of staple Note features. SamMobile’s review of the Note 5 came out back in October, and it has been around two months since I’ve been using it as a primary smartphone.

How has it held up after all this time of regular all-day usage? Well, it’s held up very nicely. Okay, so there’s a large crack at the top right of my phone, thanks to a drop that saw it fall flat on its face, but thankfully the drop didn’t do any damage to the display itself. Speaking of the display, the 5.7-inch Super AMOLED unit on the Note 5 is simply great. Everything on the screen looks stunning, even on the Basic display mode setting that makes colors more accurate but doesn’t add that horrible yellow tinge that previous iterations of Samsung’s Super AMOLED display would do.

Performance has been one of the worst issues with Samsung’s software, and even with the optimized TouchWiz, the Galaxy S6 and Galaxy S6 edge slowed down after a couple of months of use. Whether it’s the 4GB of RAM or further optimization on Samsung’s part, the Galaxy Note 5 is still very smooth and fast. I rarely see a stutter or hiccup in regular usage, and apps continue to fire up quickly. Apps in the background still don’t seem to be able to stay in memory as long as one would like because of whatever changes Samsung has made to Android’s RAM management, but it’s not as bad as it was on the S6 and S6 edge.

The biggest indication of the multitasking improvements due to more RAM is the fact that third-party keyboard apps don’t take time to show up, which was a very irritating issue on the original S6 lineup. Also gone is the lockscreen lag that we talked about a couple of weeks ago. The latest update to hit the device seems to have fixed it, and compared to the Galaxy Note 4, the Note 5 is miles ahead as far as overall performance is concerned. 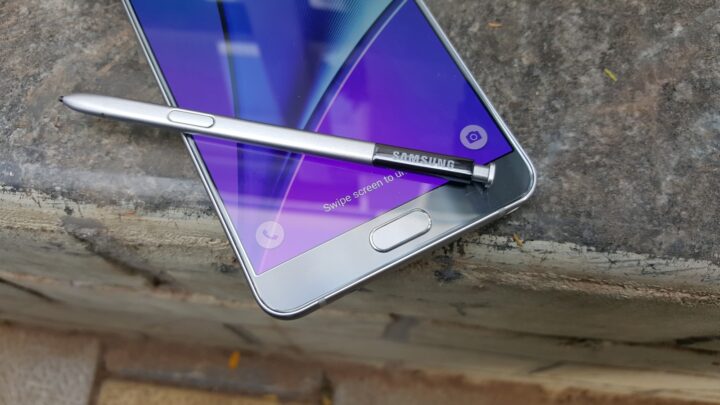 The camera is another aspect that has continued to impress. Good lighting conditions or not, the Galaxy Note 5 takes great pictures, and it takes them extremely quickly no matter how light or dark it might get. Seriously, the near-instant shutter speed in even the darkest conditions is one of the reasons I love this camera. The app itself hasn’t slowed down noticeably; it usually starts up quickly when the home button is double-pressed, though the launch can sometimes be slow when the screen is off.

What about battery life? Um, let’s just say it gets the job done but is nowhere near as good as the Note 4 or any previous Galaxy Note flagship. Battery life has improved over the weeks, partly due to Samsung’s new app optimization feature. This is the same as the Auto stop battery feature we saw on the S6 and basically starts stopping apps from running in the background all the time. It can be a problem when apps that should never shut down are killed (Android Wear being a good example), but you can disable the “optimization” for individual apps (from the Settings » Battery menu, under App optimization).

As for that S Pen, there hasn’t been much surprise. It continues to be a nice alternative to regular touch input. I don’t use it much except for copying text and typing faster, and it’s a tool that is there for those who need it but just gets out of the way for those who don’t. The push-to-eject mechanism is still an unnecessary extra step in access to the stylus, but with practice I can get it out faster than I could when I started using the phone.

The Galaxy Note 5 is just great. It’s not a good device for those who need a lot of physical storage on their smartphone (unless you get the 64GB variant), and it’s not for anyone looking for epic battery life. But for just about anything else, the Note 5 has it all. Great display, fast performance, an amazing camera, and a stylus that lets you get really productive if you need to. The best thing has been the fact that it hasn’t slowed down with continued usage over two months, and if the Galaxy Note 5 is available in your country, it’s a great purchase if you are looking for a large-screen flagship.

What do you think of the Galaxy Note 5? Do you like it, or do you think you made a mistake spending your money buying one? Share your experience in the comments below!