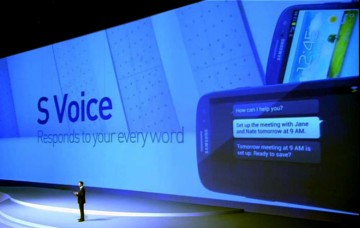 Samsung introduced its voice assistant S Voice after Apple introduced Siri on iOS, and while it works well enough (though not as good as Google Now, which trumps every other digital assistant), it only supports a few languages, making speech recognition an exercise in futility for people in many parts of the world. However, support for more languages should be arriving to S Voice in the near future, according to myphone.gr.

According to an ad published on the site, a Chinese company – Speech Ocean – is currently looking for volunteers who can read and speak Greek, in order to improve support for the language in S Voice. The project will reportedly be carried out in Athens, and participants will be paid an undisclosed sum for the one hour sessions that take place. While the ad only mentions Greek, we’ll probably see a few other languages get better support as well, though when that support will officially arrive remains to be seen.

How many of you actually use S Voice and would be interested to see support for your language?

Samsung’s old S Voice assistant is being discontinued on June 1, 2020

If you have been using Samsung devices for long enough, you may remember S Voice. It was a voice assistant available on Samsung devices long before Bixby. The company never really built it up to any meaningful potential but it sort of hung around for many years and then just disappeared after Bixby. That’s why […]

S Voice update brings a new icon, and probably other stuff no one cares for

Remember S Voice? Alright, I’ll wait a few seconds. Remember it now? Yes? Good. S Voice, the virtual assistant that Samsung never developed to any meaningful potential only to recently decide it once again needs to get into the business of virtual assistants, is getting an update today. It’s a major update as far as […]

Virtual assistants on mobile devices like smartphones and tablets have proven to be quite useful, look no further than Apple’s Siri, which compelled companies like Microsoft to come up with alternatives like Cortana. Samsung has its own assistant in the form of S Voice though it’s not nearly as powerful as those options, but the […]

The first Galaxy S5 firmware went online today, ahead of its global April 11 launch, and we naturally downloaded it and opened it up. Out of the many new and updated Samsung apps, the S Voice app has received a UI overhaul and is now much more accurate than previous versions, and we’ve got the […]

Today, we received a System Dump from our insider (Which we will post shortly) and while exploring the dump we found the new S-Voice APK. We tried the new App on the Galaxy Note II, Galaxy S III and the Nexus 4. The APP seems to work flawlessly on Samsung Firmwares whereas has some issues […]