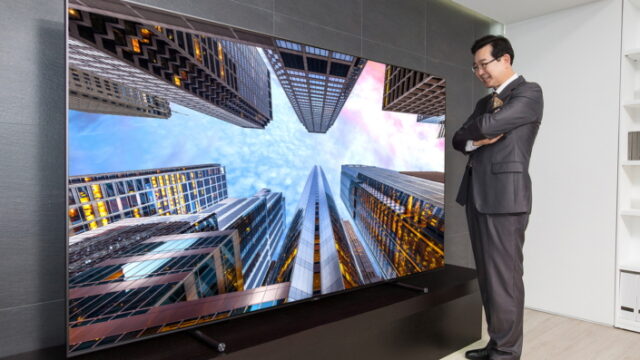 The report claims that this quantum dot display TV has deeper blacks at a level similar to LG’s OLED TVs. Samsung’s disdain for OLED TVs is well known and it has been working to improve its QLED technology to bring it up to that level.

Samsung reportedly unveiled this mystery TV at a private room called the “Qlounge” next to its CES booth to some of its clients and members of the foreign media. Korean media outlets were reportedly not allowed in for unexplained reasons.

Some participants who visited the Qlounge said that the new QLED TV with improved blacks was perhaps the most impressive technology that Samsung showed off in the lounge.

One visitor said that the displaying black color of the exhibited QLED TV was almost at a similar level to the OLED TV. The viewing angle has been improved compared to previous models as well.

The existing version of Samsung’s QLED technology is more similar to a conventional LCD display panel that it is to an OLED panel. However, Samsung has been working on an iteration of its QLED technology which will be emissive like OLED. This will enable it to match the contrast ratio and black levels of OLED with improved color and power efficiency.

The new QLED TV that Samsung reportedly unveiled behind closed doors at CES 2018 is perhaps based on the improved technology. Samsung is reportedly going to launch it at some point later this year.