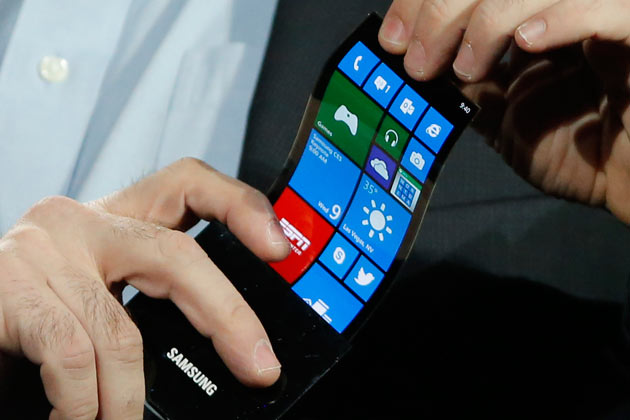 Back in November at Samsung’s Analyst Day in South Korea, the company reportedly showed off foldable displays to high-ranking officials behind closed doors, and now a report by ETNews claims the Korean manufacturer did the same at CES as well. Samsung reportedly showed off a 5.68-inch foldable AMOLED display, made of a film-like polyamide substrate that allows it to be foldable while remaining free of any deterioration in image quality at the point of folding, unlike flexible displays which use an ITO indium tin oxide film that is much weaker and isn’t that conducive to bending.

The 5.68-inch prototype is also the first to sport a touch-sensitive panel applied using metal mesh technology, which could allow it to use pen recognition without the need of a dedicated chip, ultimately reducing production costs (along with the lack of indium, which is a rather expensive material.) The foldable display reportedly took those in attendance by surprise, as it was apparently more advanced than they thought possible at the time, though we still won’t see actual devices use these foldable displays before 2015.

Samsung to choose from five hinge options for the foldable smartphone

Samsung unveiled its foldable display at SDC 2018 last week but didn’t show off the device. The actual d …

According to a new report out of South Korea, the Samsung foldable smartphone release date might be scheduled …

Samsung to produce one million units of its foldable smartphone initia …

In a bid to get as many developers on-board before its foldable smartphone hits the market, Samsung showcased …

Samsung has finally finally provided us our first look at its much-rumored foldable display. This panel is wha …