Hope is a good thing. What isn’t good is to keep giving someone hope only to disappoint them each time. But Samsung’s customer representatives love doing that, and they’re at it again. We’ve seen before how Samsung’s customer reps have said the Galaxy S8 and Galaxy Note 8 will be getting Android 10. That’s despite the fact that Samsung makes no mention of the two devices in its Android 10/One UI 2.0 update roadmap, and the company also only provides every device with two Android version upgrades.

But it seems the company’s customer care department is yet to get the memo, as they continue to say that the Galaxy S8 and Note 8 are eligible for the Android 10 update. This seems to be yet another case of Samsung’s customer reps having no clue, although it could also be a case of them simply telling customers what they want to hear. Either way, Samsung’s history with software updates indicates that the Galaxy S8 and Galaxy Note 8 will end their life on Android Pie (though we would love to be proven wrong).

Even if the Korean giant does end up sending out a third major Android OS update, it will probably start with more recent devices, like the Galaxy Fold, Galaxy S10, or the upcoming Galaxy S20. Unfortunately, we will only find out if that will happen in a couple of years once Android 11 or Android 12 come out. 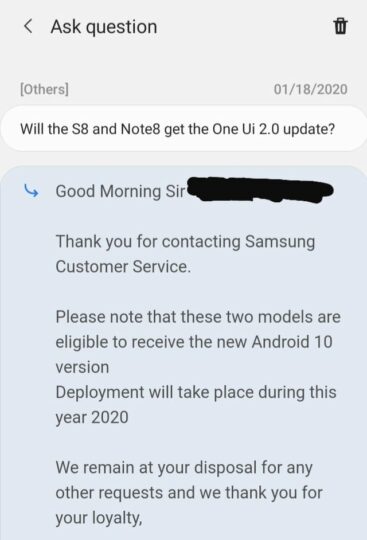