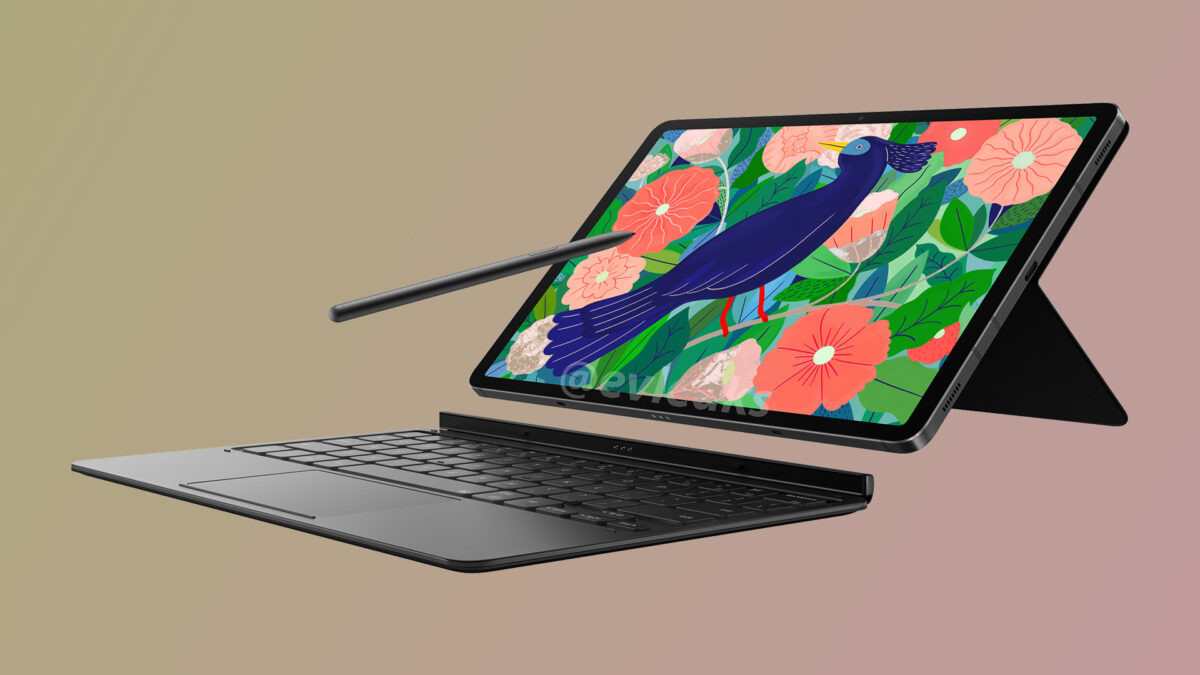 Samsung will unveil a bunch of new products, including smartphones, tablets, and wearables, over the next few weeks. However, the design and features of most of those devices have been leaked. After we exclusively unveiled the specifications of the Galaxy Tab S7 and the Galaxy Tab S7+ last week, the upcoming tablet’s first press render was leaked. Now, another image of the device has appeared on the internet.

The newly leaked press render, published by Evan Blass, gives us a closer look at the Galaxy Tab S7’s S Pen and keyboard cover. The tablet appears to have three pogo pin connectors on one side along with two indentations for connecting the keyboard cover. The tablet has two speakers and a USB Type-C port on the bottom, and we assume that there would be two more speakers on the opposite side for stereo audio.

The keyboard cover for the Galaxy Tab S7 has a dedicated row for number keys and a trackpad. The S Pen appears to have changed its shape compared to the Galaxy Tab S6’s S Pen. It seems to have a cylindrical shape rather than a flattened one, making it easier to hold and use. We are not sure if the stylus brings additional features compared to last year’s S Pen, but we can expect lower latency. The keyboard cover also features a kickstand for resting the tablet on flat surfaces.

The upcoming tablet runs Android 10 with One UI 2.5 enhancements. The Galaxy Tab S7 has a 13MP+5MP dual-camera setup on the rear and an 8MP front-facing camera. It will be available in Wi-Fi-only and LTE variants. The tablet will be powered by a 7,760mAh battery and support 15W fast charging. The larger version of the tablet, the Galaxy Tab S7+, has a 12.4-inch screen and a 10,090mAh battery with 45W fast charging.