The user manual for the Galaxy M10s is now available on the Samsung India website, hinting at an imminent launch. Later this week, Samsung is set to launch the Galaxy A50s in India, as the company revealed through its social channels, and the Galaxy M30s will go official just a week after that. It looks like the Galaxy M10s could soon follow.

The Galaxy M10s, as the name suggests, will be a slightly improved variant of the Galaxy M10. The primary upgrade will be found under the hood, with the M10s to be powered by the Exynos 7904 chipset, a notable bump from the Exynos 7870 that powers the M10 as the 7904 has a couple of high-performance CPU cores while the 7870 is purely focused on efficiency. It will have 32GB of storage, as we had revealed, along with 3GB of RAM, the same as the Galaxy M10. It will have Android 9 Pie out of the box and should be eligible for the Android 10 update.

As revealed by the user manual, the M10s will have a USB Type-C port (the M10 has a microUSB port). The user manual doesn’t reveal any other upgrades, though. The device has dual rear cameras and a rear-mounted fingerprint sensor; yes, the headphone jack is present as well. Samsung will probably remove the 3.5mm jack from even its budget devices at some point, but it doesn’t look like that will happen right away. Hopefully, the company still managed to cram in a bigger battery in there. The M10 has a 3,500 mAh battery, and a 4,000 mAh battery on the M10s would be a good match for the more powerful Exynos SoC.

How much the Galaxy M10s will cost and when it will go on sale remains to be seen. It shouldn’t be long before Samsung takes the wraps off the device, and we will be sure to let you know once that happens. 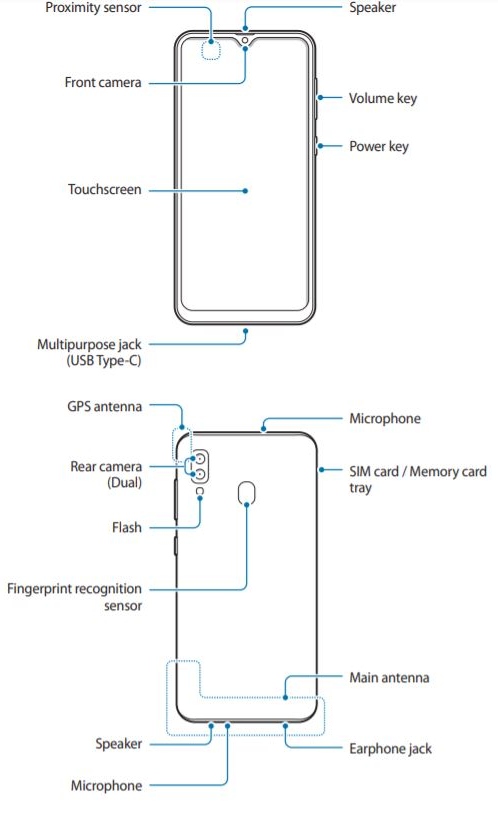