The refreshed Galaxy A50 variant known by the model number SM-A507F has been tested online using Geekbench. But even though the so-called Galaxy A50s is expected to be a refresh over the ongoing model, the benchmark results show a number of hardware characteristics that have been left unchanged.

So far, the refresh doesn’t have anything new to show for itself, but the smartphone is still largely covered in mystery. It’s not like we’re running out of time for more leaks and rumors, as it’s still unclear when the Galaxy A50s is supposed to come out. More importantly, some improvements may have been made in areas that don’t come up in most benchmarking tools.

Same, but different, but still the same?

At face value, judging by the Geekbench listing, the Galaxy A50s is identical to the ongoing model. It’s equipped with the same Exynos 9610 chipset and 4GB of RAM while running Android 9 Pie. The SM-A507F also scores just about the same points in the Geekbench single-core and multi-core tests as the SM-A505F, the regular Galaxy A50.

By looking at the Galaxy A10s – which is likely to improve upon its camera configuration and sensors – we could guess that Samsung might want to refresh the Galaxy A50 in similar areas. The main camera on the Galaxy A50 could use some improvements to remain competitive against some of its mid-range rivals. And by focusing less on changing the internal hardware, perhaps the Galaxy A50s will offer these improvements and even better value-for-money. 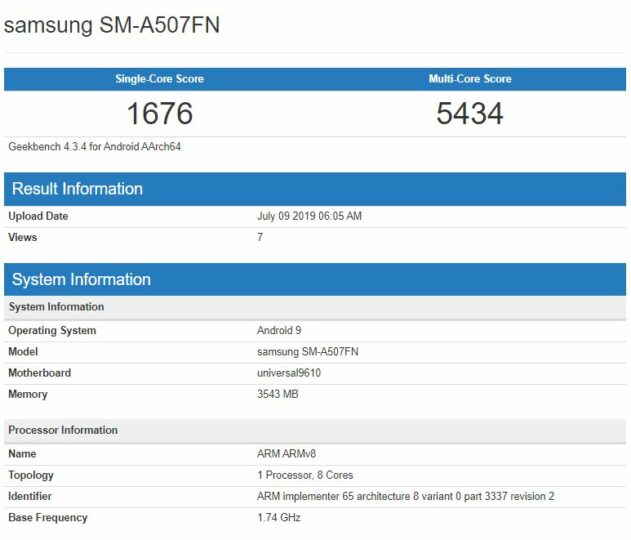