In a little less than a week, the Galaxy S9 and Galaxy S9+ will go on sale in many countries around the globe, and some pre-order customers already have the device in their hands. Today, those who have an S9 or S9+ will be treated to the first software update for Samsung’s newest flagships. The update is available in Germany at the moment and should be making its way to other markets in the coming days. It’s a minor update at 242 MB and brings the March 2018 security patch. The build number is G960FXXU1ARC5 and G965FXXU1ARC5 for the S9 and S9+ respectively.

Hopefully, the first Galaxy S9 update will fix some of the bugs we had encountered on the pre-final software on our review units, although the changelog is a generic one that doesn’t let on any particular improvements or new features. We’re also hoping Samsung will improve features like AR Emoji and Bixby Translate in future updates. Right now, though, the latest security fixes seem to be the focus. The March 2018 patch fixes nine critical Android vulnerabilities and five that only affect Samsung’s software; it was first rolled out to the Galaxy A8 (2018) earlier this week.

The latest update can be downloaded from the Settings » Software update menu on an S9 or S9+. The complete firmware files will be up on our database as soon as get out hands on them, and the update should also be available via Samsung Smart Switch. If you don’t have the Galaxy S9 or Galaxy S9+ yet and are wondering if they’re a worthy purchase, don’t forget to read our Galaxy S9 review. 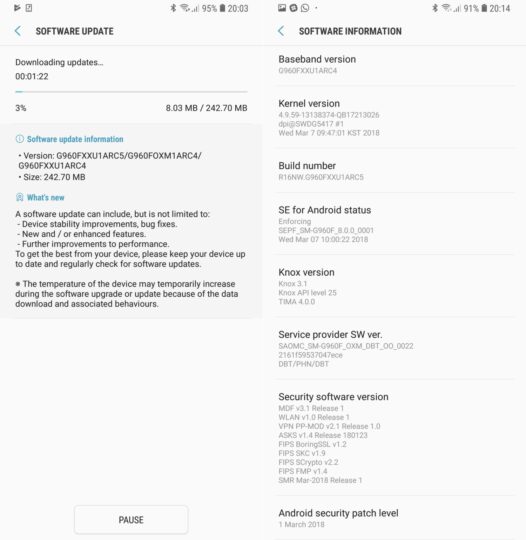