We’re the source of all things Samsung, so it would be wrong if we didn’t jump on the bandwagon and offer up our opinion on the recent reports of some Galaxy Fold units breaking after being in the hands of reviewers for no more than 24 hours. But before we dive deeper, we want to state that even though we’re Samsung fans, we’re unbiased — we both praise the firm and criticise it.

Now let’s get down to business. We flew over to London to pick up our Galaxy Fold on Tuesday. It’s still working as should be. But the same can’t be said for some reviewers who also had the chance to get their hands on one ahead of the device’s launch in the United States on April 26. But for the most part, their demise is due to user error; though there are a couple of concerning cases.

We’re going to address them all.

There’s a protective layer covering the screen, which shouldn’t be detached or tampered with. In most instances, the reviewers had fidgeted with the film in some way, shape or form. We can’t fathom why, though. When we arrived to pick up our Galaxy Fold, Samsung held a briefing to fill us in on everything we needed to know — and not removing the protective layer was at the top of the list.

We’ve noted before that Samsung should have made more effort to signpost that a design feature as important as the protective layer, which is integral to the screen functioning as intended, should not be toyed with. As it stands, the retail unit comes with one reference on the cellophane wrapper that covers the handset in the box. But there should be more warnings, like a sticker on the screen.

We could understand if a consumer stripped off the film without reading it, but reviewers have no excuse. Everyone we have spoke to, our own team included, was told face-to-face that the protective layer should not be removed because the screen is less than a millimetre thick and thus prying it off could cause significant damage — just as we saw in the case of some of the affected reviewers.

What’s even more frustrating, however, is the fact that people confused the film for a screen protector and wanted to remove it as a result. If that was the case, we most certainly wouldn’t want to remove one of its main protective features — and nor would most consumers. After all, the Galaxy Fold retails for $1980 in the United States. You’d want to do everything you can to protect it.

Now let’s talk about The Verge, who didn’t pry off the screen protector, but rather used a thin piece of molding clay to prop up the handset for a video shoot. It’s thought that dust from the material seeped into the slight opening between the hinge and the screen, rendering the latter useless. That’s not a consequence most people would think of, so it’s an important lesson for all. 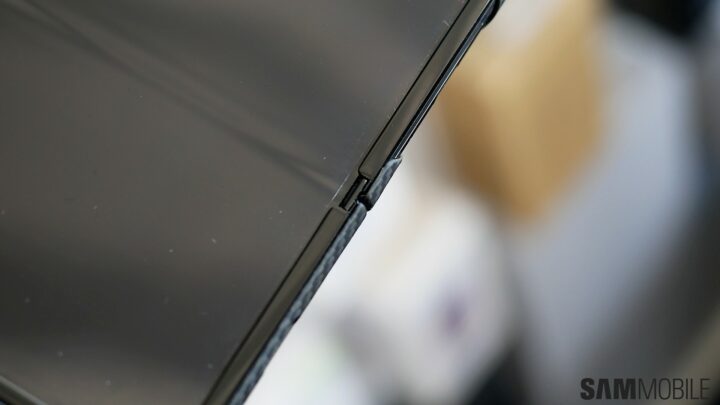 There’s a slight gap between the hinge and the screen.

The Galaxy Fold doesn’t have an IP certification, so it isn’t resistant to dust, dirt or water. For that reason, users must be extremely careful with the device. Any element could lead to its unfortunate demise. Chances are, you aren’t going to be playing with clay near your unit, but if you have children some microscopic dust from a rogue piece of Play-Doh could have the same effect.

The final instance of breakage shows no signs of user negligence whatsoever. The owner in question said that half of the device’s screen stopped working after a few hours of use. To us, that sounds like a faulty unit, in the same way that if you buy a bunch of bananas from a shop one or two could be bruised. The reality is that all products have defects, even if only a couple of units suffer from them.

Samsung has replaced the unit and is investigating the cause of the failure.

As we said earlier, our Galaxy Fold is working just fine. But we’d like to take this opportunity to advise Samsung to invest more resources into making customers aware of how sensitive the handset is to dust, dirt and water, as well as stressing the importance of not removing the protective layer. That could be done in the form of an in-the-box leaflet and a start-up software notification.