Samsung has issued an statement about the Galaxy Fold’s display issues, saying that it will be thoroughly inspecting the malfunctioning units “in person to determine the cause of the matter.” And, as we suggested after the display issues came to light, the company also says it will make the importance of the preinstalled protective film clearer to consumers. The April 26 retail launch, meanwhile, will not be delayed, according to The Wall Street Journal. 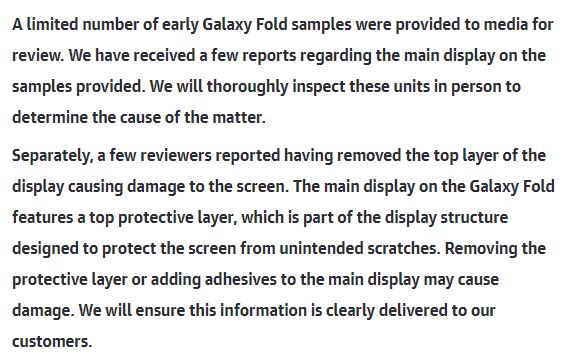 A problem currently limited to the US?

The oddest thing about the whole ordeal is how the display issue is only affecting units in the hands of US publications. Some major publications such as Engadget still have their Galaxy Fold running properly, though, and so is our unit (which arrived at our doorstep from London). And given Samsung’s confidence in maintaining the late April release of the Galaxy Fold instead of delaying it, the issue may not be too widespread.

Of course, Samsung was also rather confident in the initial couple of weeks after the Galaxy Note 7 started catching fire, so we’ll just have to wait and see what happens with the Galaxy Fold. To say it’s an important device for the Korean giant would be an understatement, and making sure nothing goes wrong after consumers have received their orders would be in Samsung’s best interests.