Is the Galaxy Fold breaking really that big of a deal?

The internet is rife with outrage that Samsung’s Galaxy Fold isn’t as durable as one would have hoped, breaking after being in the hands of reviewers for no more than 24 hours. But I think it’s been blown of proportion. After all, in most instances, the reason it malfunctioned was because the owner removed or toyed with the protective film covering the screen, which shouldn’t have been detached.

Samsung should have made an effort to signpost that the feature, which is integral to the screen functioning as intended, should not have been tampered with. Based on the backlash it’s encountered as a result of the mishap, it’s almost certainly something it will do before the handset starts shipping to customers in the United States on April 26 — the original local release date.

That’s right — on the back of all the criticism, Samsung decided against delaying the launch. Instead, it issued a statement expressing the importance of leaving what it’s calling the “top layer” of the screen in place, stating removing it could cause significant damage, as we saw in the case of some of the affected reviewers. That information should be plastered absolutely everywhere. 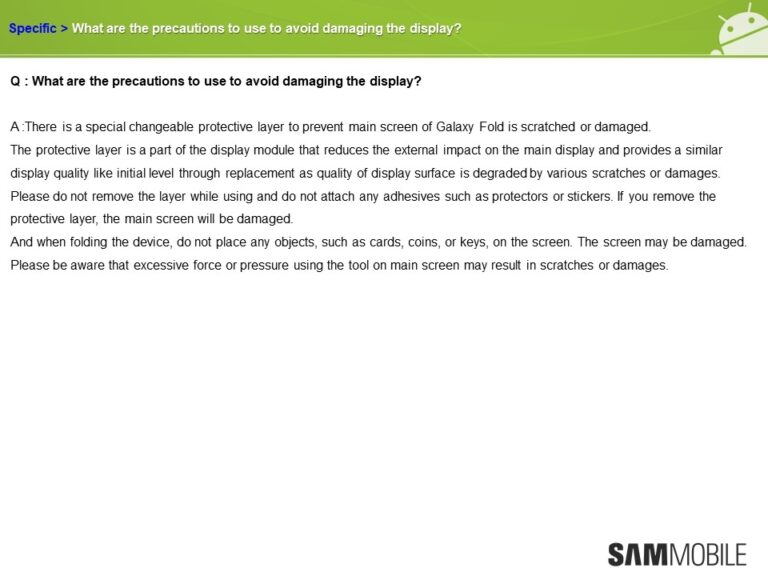 Samsung’s in-house repair guide acknowledges the importance of the film, so why isn’t it stressing it publicly?

At the moment, there’s one reference on the cellophane wrap that covers the handset in the box. But let’s face it: that’s not something many people read at all — a sentiment YouTube star Unbox Therapy shares. There should be a little card in the box with a massive warning symbol, as well as multiple push notifications when the handset is turned on, stressing the importance of the film.

We should add that we’ve had no issues with our device and from what we’ve heard, neither have other reviewers in Europe. The issue appears to be isolated to the United States; indicating that there could also be a region-specific defect as The Verge, for example, said they didn’t remove the film before their device malfunctioned; though they could have unintentionally tampered with it.

It’s important to remember that the Galaxy Fold is an experimental device in all aspects — from the packaging it comes bundled in right down to the folding mechanism itself. If Samsung had put more effort into making users aware that the film shouldn’t be removed, most of the broken devices would still be working today. Sure, some wouldn’t… But it’s normal for some review units to break.

All devices have defects, even if only a couple of units suffer from them. A handful of Galaxy S10 5Gs that fly off the production line could have a faulty camera, for example, while the other ten thousand produced that same day may not. They’re known as lemons. So it’s possible that The Verge could have received a lemon. Samsung is inspecting all of the broken units to be certain, though.

Still, those forking out $1980 should keep in mind that this is an experimental device, and that’s reflected in how exclusive it is. It’s available in the thousands in the United States, for context. Not the millions or billions. It’s aimed at the tech-obsessed, wanting a taste of the future before it’s mainstream — and that’s exactly what Google did with Glass back in 2013.

It’s not perfect, but it’ll get there.