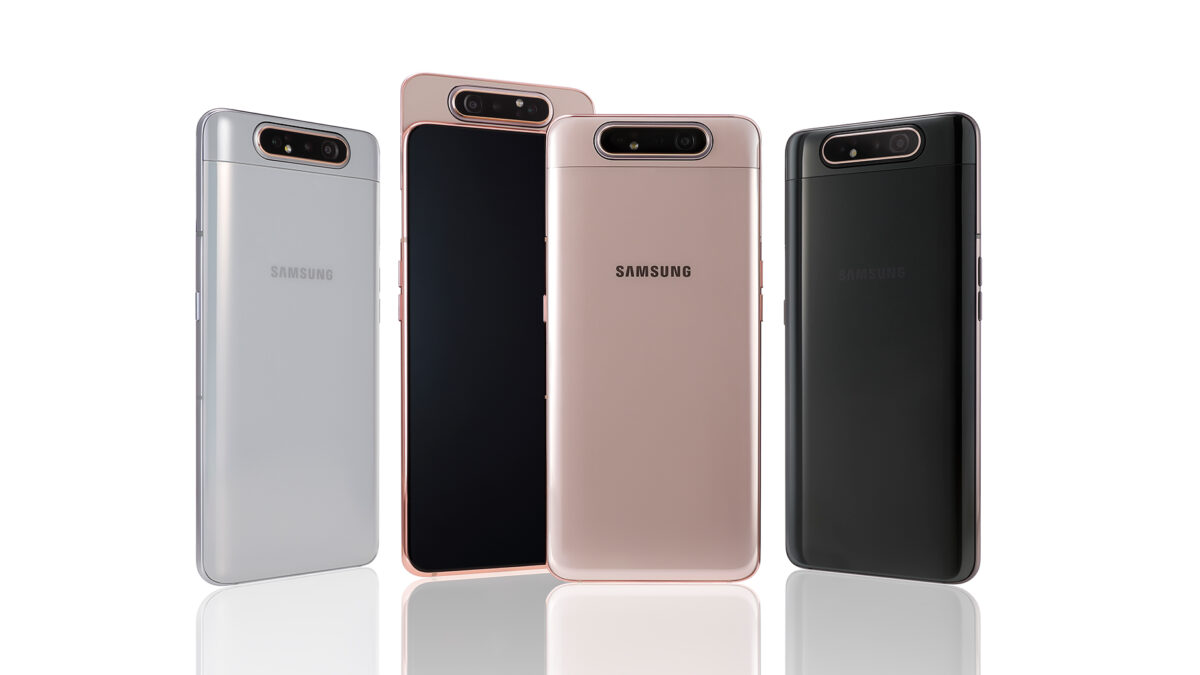 The device that was believed to be launched as the Galaxy A90 has actually been unveiled today as the Galaxy A80. This is Samsung’s first smartphone with a “revolutionary” rotating camera. This allows for a display that requires no notches and no hole punch.

It doesn’t have separate cameras on the front and back. The rear camera system can rotate and double as the selfie camera as and when required. It’s mounted on a slider which opens when you switch to the front-facing camera. You can thus take advantage of the powerful multi-lens camera setup for selfies and videos.

The Galaxy A80 features a 6.7-inch FHD+ 1080×2400 pixel resolution “New Infinity Display.” That’s what Samsung is calling this iteration of the Infinity Display, one without any notches or holes. One has to admit that it does look quite good. The device comes with a 2.2GHz octa-core processor with 8GB of RAM and 128GB of storage. It does not feature a microSD card slot.

This handset isn’t made from the 3D Glasstic material that Samsung has been using for other handsets in the new Galaxy A lineup. It has been fashioned from a more traditional marriage of glass and metal. The Galaxy A80 gets a 3,700mAh battery with 25W Super Fast Charging, as expected. It also has an in-display fingerprint sensor. The Galaxy A80 ships with Android 9 Pie with additional features such as Samsung Pay, full Bixby Voice support and Bixby Routines.

The camera is obviously what sets it apart from the entire Galaxy A lineup. There’s a 48-megapixel f/2.0 primary sensor with an ultra-wide 8-megapixel f/2.2 camera that has a 123-degree field of view. There’s also a 3D Depth camera for Live Focus videos. When the selfie mode is selected in the camera app, or any app that uses the front camera for that matter, the camera system automatically pops up from the back and rotates. This provides users with the same high-resolution lens on both the front and back. The Galaxy A80 also gets software features such as Scene Optimizer and Flaw Detection.

Samsung will sell the Galaxy A80 in Phantom Black, Angle Gold and Ghost White colors. Samsung has improved the gradient effects so these colors will look different depending on the light reflection. Pricing and availability will vary by market.