We have known for a while now that Samsung is working on the Galaxy A90. Earlier reports suggested that this could be the first Galaxy A series handset with a pop-up camera. That would mean its display won’t have any notches or punch holes for the selfie shooter.

There have been conflicting reports about the camera mount but it now appears that placing your money on a no-notch display will be a good bet. A page appeared on Samsung Indonesia’s website which mentions that the Galaxy A90 will have a “Notchless Infinity” display.

“Notchless Infinity” display will only be on the Galaxy A90

Samsung doesn’t do conventional notches for its phones. It introduced a variety of display solutions last year which include the Infinity-O, Infinity-U and Infinity-V. The Infinity-O is pretty simple. It places the camera in a cutout within the display itself. The other two aren’t as big as the notches found on different devices. However, they do make their presence felt on the display even if they house just a single front camera.

The reference to a notchless display for the Galaxy A90 was spotted by our friends over at GalaxyClub on Samsung Indonesia’s website. There’s a line at the end of a promotional page for Samsung’s upcoming April 10 event which means that the “Notchless Infinity screen only available on Galaxy A90.”

The page didn’t have a render of the Galaxy A90 so it’s as yet unknown what the camera placement would be like on this device. The promotional page has been taken down but its cached version is available from Google. According to recent reports, the Galaxy A90 will have a sliding, rotating mechanism for the camera. This would mean there will be only one camera system with a rumored 48-megapixel sensor which could be used as a front and rear camera.

It will allow the front of the Galaxy A90 to be all display with no notch or punch hole. We will get to know for sure come April 10 when Samsung’s next Galaxy Event takes place. 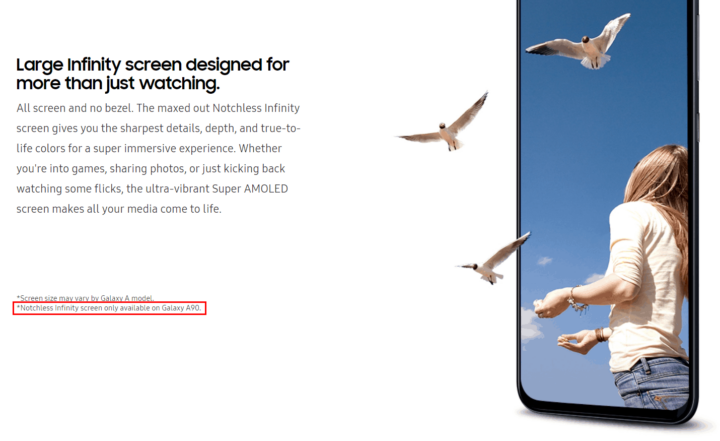