Samsung to release a Fortnite Galaxy accessory kit next week 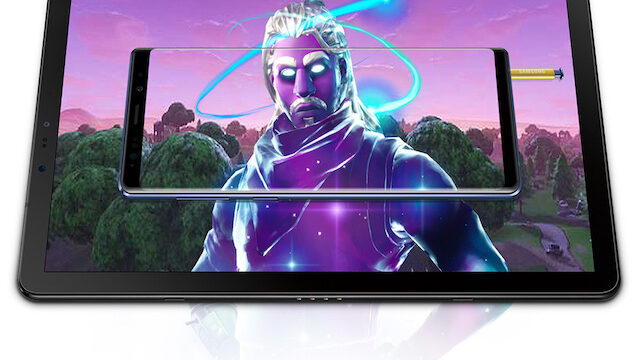 Samsung may have a gaming smartphone in the pipeline but it won’t wait for that to promote the Galaxy Note 9’s suitability for mobile gaming. It hitched that wagon to the Fortnite hype train and obtained a short exclusivity period for the game’s launch on Android. The company has now announced that it’s going to release a new Fortnite Galaxy accessory kit next week.

This follows the exclusive Galaxy skin for Fortnite that Samsung released two months ago. The same skin that people have gone to great lengths to steal without having to buy a Galaxy Note 9 or Galaxy Tab S4. The company has also announced the result of the Fortnite contest it launched last month. Samsung has offered other incentives in the past as well related to Fortnite. Customers who pre-ordered the Galaxy Note 9 were offered $150 worth of in-game currency.

The Fortnite Galaxy accessory kit will be available to Galaxy Note 9 and Galaxy Tab S4 owners exclusively. It includes a new glider, back bling and a harvesting tool. It joins the Galaxy skin as an exclusive in-game item for owners of the aforementioned devices.

The contest required players to use the Galaxy skin and screenshot or record video of their best Fortnite moment. This was all for a chance to play Fornite with Ninja who is unquestionably the most popular Fortnite player on the planet.

Hector Diaz has won the contest and will join the Ninja Galaxy Squad. It includes Ninja, Travis Scott and Awkwafina. He’s a big fan of Ninja so playing Fortnite with him would be a dream come true for Diaz.

In addition to Diaz, there are three runners-up who are receiving the Cross-Platform Gamer Pack valued at $5,249. It includes a 65-inch QLED TV, 49-inch QLED gaming monitor and wireless noise-canceling headphones from AKG.

Samsung has revealed today that the Fortnite Galaxy accessory kit will be available starting Thursday, November 1. The Ninja Galaxy Squad’s stream will take place on October 30. It will be accessible through Ninja’s Twitch channel.

Fortnite Galaxy Cup 2.0 kicks off on Sunday with new cosmetic items to …