The Fortnite partnership isn’t just limited to the timed exclusive and the skin. Samsung even offered 15,000 V-Bucks, $150 worth of in-game currency for Fortnite, to customers who pre-ordered the Galaxy Note 9. They were given a choice between a pair of headphones and the V-Bucks. 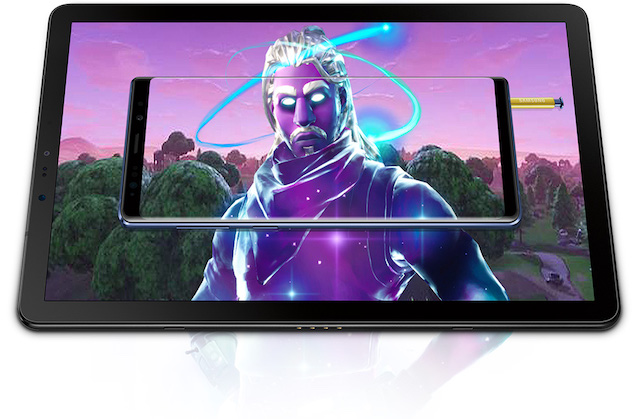 It was also confirmed that the Fortnite Galaxy skin would be exclusive to those who get the Galaxy Note 9 or Galaxy Tab S4. The following procedure had to be followed to unlock the skin:

What these Fortnite Galaxy skin, for lack of a better word, “thieves” are doing is that they’re going through the exact same procedure on demo devices at retail stores. They download the game, log into their account, play the three games so that they can get the skin without having to buy the device. Granted, it takes a bit of time, but enough people have done it for Samsung to try and stop them now. Signs have been put up at retail locations in the United States informing visitors that Samsung demo phones will not download Fortnite. That’s in vain, though, as people have found a workaround. Just when you need to sign into Fortnite, disconnect from the store’s Wi-Fi network and connect to your phone’s hotspot. This bypasses the network restriction and lets you get online and play the game. According to a reddit user, this method only worked on carrier demo devices. The ones at Samsung’s demo station were programmed to not download the Fortnite installer at all.

Since only one Fortnite Galaxy skin can be redeemed per device visitors would have to hope that no one else beat them to it, not to mention the fact that it’s going to take a long time to first download the game and play three matches. It goes without saying that if someone does this on a demo device, they should be mindful of logging out of their account once they’re done.

If you don’t want to go through all this hassle or feel that it’s going to bother your conscience then just go ahead and buy the Galaxy Note 9. Then follow the steps above to claim your free Fortnite Galaxy skin.