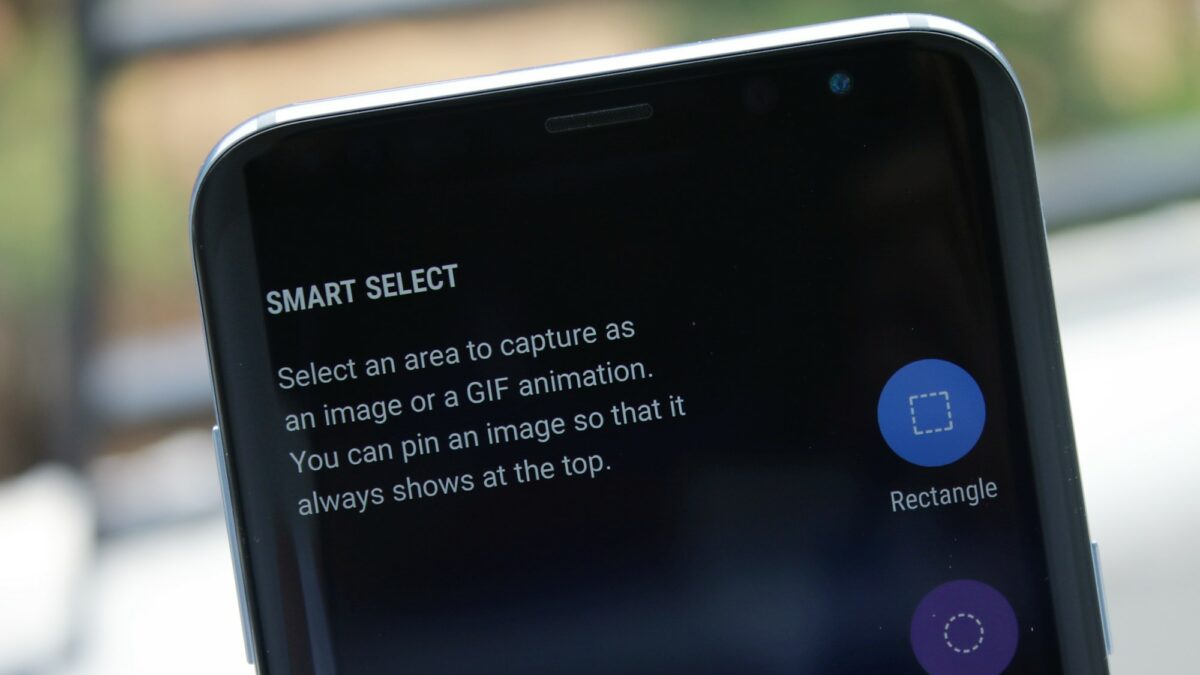 Seasoned Galaxy Note users will know how the S Pen makes possible a slew of functionality that you won’t find on devices without a stylus. One of the features offered by the S Pen on the Galaxy Note lineup is the ability to capture random sections of content on the screen in different shapes and sizes. The feature is called Smart Select, and Samsung has now brought it over to the Galaxy S lineup as an Edge panel on the Galaxy S8 and S8+.

With Smart Select, you can capture custom screenshots in either rectangular or oval form, and also create GIFs from specific parts of the screen (which is great for capturing GIFs from videos on YouTube or other apps). Smart Select also lets you pin images on top of the screen so you can have that image on top of every other app. You can even grab text automatically from the captured images for copying or sharing it somewhere.

So how does it work? Let’s take a look at it step-by-step. First, let’s talk about capturing screenshots; we’ll dive into capturing GIFs later on.

You should now see the captured screenshot on the screen, with various options for further actions. You can hit the Draw button to edit the screenshot, share it with other apps, or save it as an image in the gallery for editing or sharing later. If you’ve captured some text on the screen, you will also see an option to extract text. For first-time users, this might need an extra step of installing Samsung’s optical reader app, but once you’ve done that, you can come back to the screenshot and hit the Extract text button again to grab the text for sharing or copying.

This is clearly the most interesting option in Smart Select. You can capture 15 second GIFs from any video (or another GIF) that might be playing on the screen, in any app that can play videos. It’s great for sharing moments you think your friends would like to see, and there’s no fear of copyright issues as GIFs are limited to 15 second clips and do not have any audio.

To capture GIFs, the procedure remains the same as capturing a regular screenshot via the Smart Select Panel. Let’s take a look at it step-by-step again.

After you hit Record, the phone will make a 15-second GIF, although you can stop at any point in between. Once the GIF has been captured, you will get options to draw, share or save the file, just like you do with regular screenshots. If you save the file, you will find it in the gallery app with your regular photos and videos. The possibilities are endless, although it’s disappointing that Samsung doesn’t let you capture GIFs of you doing something other than watching videos on the phone.

Pin screenshots to top of screen

Pinning a part of the screen isn’t something you’d need often. The best use case we can think of is when you want to type in text in one app by looking at the same text in another. This is particularly useful for copying text from SMS or a WhatsApp; you already have the option to copy messages in both SMS apps and WhatsApp, but you can’t copy a specific part of a message, which is where the pinning option can come in handy. Of course, your use case can vary depending on your needs.

To pin a part of the screen, here’s what you do.

You will now see the captured part of the screen on top no matter what app or screen you’re on. You have three options here once you’ve pinned something. You can minimize the image so that it gets out of the way when you need it, or save it in the gallery, which will close Smart Select and remove the pinned image from your screen. Remember, the pinned image can be moved around on the screen no matter where you like.

That’s it for the Smart Select Edge panel, and how you use it is up to you. Hopefully, how it works is now clearer to you than it was before. Should you have any issues, don’t forget to let us know through the comments so we can help you get back on the right track. For more tips and tricks for the Galaxy S8 and S8+, go here.